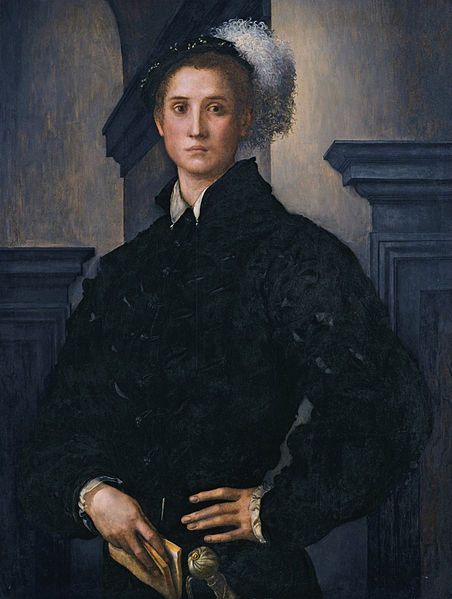 A stunning Renaissance portrait, reputed to be of the teenage Duke Cosimo I de’ Medici and painted by the Florentine master known as Pontormo, snared a staggering $35.2 million at Christie’s today, tripling the previous record price for an old master.

The painting was purchased by the Getty Museum of Malibu, Calif., from the estate of investor and philanthropist Chauncey Devereux Stillman, who died in January at the age of 81. It has most recently been on extended exhibition at the Frick Collection in New York.

The previous high for an old master picture was set at Christie’s London salesroom in April 1985 when Andrea Mantegna’s “Adoration of the Magi” realized a then-unheard-of $10.45 million. The Getty also bought the Mantegna.

With today’s sale, the old masters join the pricey company of impressionist and contemporary works of art that have brought extraordinary prices in the last two years. Despite its record in its category, the Pontormo ranks only fifth in the top-price sweepstakes behind two van Goghs (“Irises,” $53.9 million, and “Sunflowers,” $39.9 million) and two Picassos (“Self Portrait: Yo Picasso,” $47.8 million, and “Acrobat and Young Harlequin,” $38.4 million).

London dealers Thomas Agnew and Sons Ltd. successfully bid on the Pontormo on behalf of the Getty. Just outside the packed salesroom moments after the sale, Julian Agnew, managing director of the firm, said, “I was very satisfied with the price, from the Getty’s point of view.”

At Agnew’s side stood the beaming George Goldner, the Getty’s curator of drawings and acting curator of paintings, who said, “We’re absolutely thrilled. It’s a very good price, and it’s the finest picture to be sold in any field in the last 10 years. You could say it was a bargain.”

Pre-sale speculation that the cash-rich Getty, with its multibillion-dollar endowment, would pounce on the Pontormo remained the only hope that the picture would remain on public view in America. No other museum has the resources to compete for top-price art at auction.

Bidding began at $12 million and continued up in half-million-dollar spurts. Jeffrey Deitch, an art adviser bidding for an unidentified client, dropped out at $27 million. Agnew said he entered the bidding at $28 million and beat out the last remaining telephone bidder, who remained anonymous.

Except for an appreciative murmur when the Pontormo appeared on the revolving stage, the action was decidedly mild and mannerly when compared with the more raucous atmosphere at the semiannual evening auctions of contemporary and impressionist art.

Writer Tom Wolfe, who was in the salesroom today, said of his friend Chauncey Stillman moments after the Pontormo was sold, “He was a great man. He didn’t seem to make much of a fuss over his paintings, certainly not the kind of art fever that surrounds it now.”

Long identified as the “The Halberdier,” in reference to the halberd he is holding, the sensuous portrait of a handsome youth decked out in a dandified military costume is dramatically positioned in front of a shadowy green fortress and looks down at the viewer with a quizzical gaze.

The illustrious picture has been at the Frick since 1970, with previous respites at the Metropolitan and Harvard’s Fogg Museum.

Stillman, a grandson of the founder of what is now Citibank, purchased the painting at an auction of his father’s collection in New York in 1927 for $37,000. It had previously belonged to Princess Mathilde Bonaparte, a cousin of the French emperor. According to the catalogue prepared for the sale, the portrait had been commissioned by the freshly victorious duke in 1537. It was brought to this country by Stillman’s grandfather, James Stillman, after he bought it in Paris in 1904.

The 36 1/4-by-28 3/8-inch portrait lacks both a date and the artist’s signature. It was originally painted on a wood panel and was transferred to canvas by an art restorer sometime in the late 19th century, long before conservation practices and the ever-escalating art market put an end to the risky technique that involved scraping away the layers of wood.

In 1976, the painting was cleaned by art conservationist Gabrielle Kopelman. “The painting is in fine condition,” said Kopelman, in a brief phone interview earlier this week. Curator Goldner said he was perfectly satisfied with the condition of the painting and joked, “All we have to do is buy a new frame for it.”

The National Gallery of Art has a Pontormo portrait of its own titled “Portrait of Monsignor della Casa,” and according to Gretchen Hirschauer, assistant curator of Italian pictures there, “it’s not going anywhere. It’s our only `secure’ Pontormo,” she said, referring to the ever-changing scholarship, which has cast the attribution of some works in doubt. What had been the gallery’s second Pontormo, “The Holy Family,” was recently reattributed to the duo of Pontormo and his star pupil, Bronzino.

Adding to the mind-numbing scholarly speculation, in a reproduction in Christie’s catalogue, the gallery’s bearded Monsignor della Casa is identified as Niccolo Ardinghelli. Said Hirschauer, “We stick with our title. They can call it whatever they like.”

Asked if he believed the portrait sold today was indeed of the young duke, Goldner said, “It’s a very complicated art historical puzzle. It’s not a black and white case, and besides it really doesn’t matter.”

The hefty proceeds from the Pontormo will go to the Homeland Foundation, the charity Stillman created in 1938 to assist medical missionaries worldwide and promote Catholic intellectual ventures, according to Monsignor Eugene V. Clark, secretary of the foundation’s board of directors.

“Mr. Stillman had a very clear head about where he wanted things to go,” said Clark in a phone interview hours before the sale. “He was a lovely gentleman, an enormously generous man. He left the foundation free to do what it chose to do {sell the Pontormo at auction}. He did indicate it was more than an acceptable thing to do.”

Early in March, the Frick was given one day’s notice by the executors of Stillman’s estate that the picture would be taken from the museum. It was removed to temporary storage from its venerated spot in the gallery’s south hall, within fencing distance of a Vermeer.

The Frick’s director, Charles A. Ryskamp, declined to comment on the removal but has said that the museum had long believed Stillman’s long-term loan would become a bequest.

“The timing wasn’t good,” E. Lisk Wyckoff Jr., chairman of Homeland and co-executor with Manufacturers Hanover Trust of the Stillman estate, said of the Pontormo’s removal. Wyckoff explained that Stillman decided to expand his charity to an “operating foundation” in 1986 and transform his 1,500-acre farm-estate, Wethersfield, just outside of Armenia, N.Y., into a museum as well as headquarters for the foundation. Homeland has been in limbo since Stillman’s death in January. Other pictures-most of them impressionists, including works by Degas, Lautrec and Cassatt-in Stillman’s collection will remain at Wethersfield.

In the huge shadow of the Pontormo, other old masters garnered $10.16 million, bringing the day’s total to a record $45.36 million. Among the other works sold were Pieter Brueghel the Younger’s cinematic oil, “The Battle Between Lent and Carnival,” which fetched a record $2.97 million, and a rich and untitled table-top still life by the Dutch painter Jan Davidsz. de Heem from 1653, which brought $1.27 million.

Asked how Christie’s estimated the $20 million to $30 million pre-sale estimate on the Pontormo, Christie’s expert Ian Kennedy said, “Two years ago the Kimball Museum bought Caravaggio’s `Card Sharps’ privately for $15 million. It’s really anybody’s guess.” In the background of the gallery where the Pontormo hung, a BBC crew aimed its cameras at the portrait, for a documentary titled “The Midas Touch.”