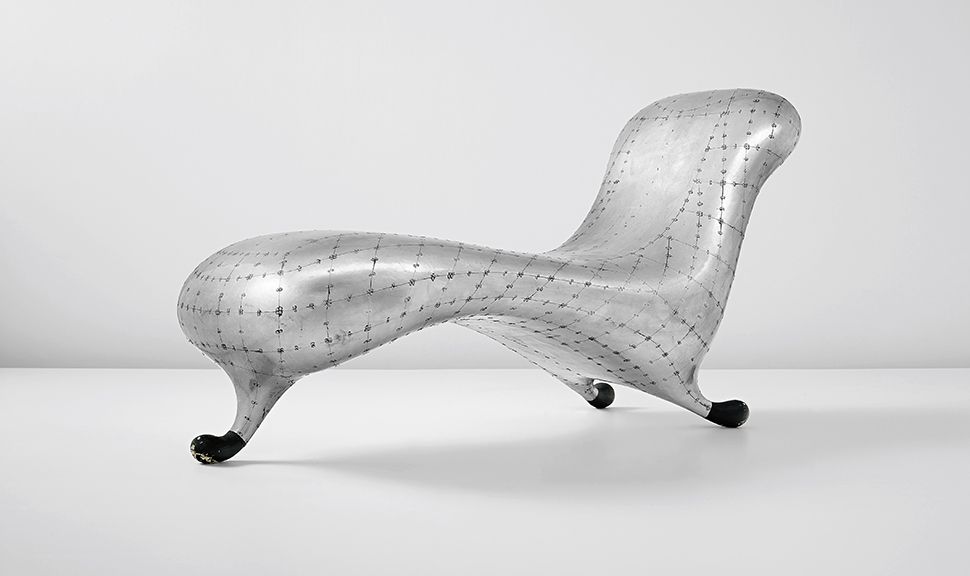 Marc Newson’s “Lockheed Lounge,” circa 1990, sold on Tuesday for $3,700,400, an auction record for any living designer. (Image Courtesy of Phillips)

Estimated at £1.5-2.5 million ($2.2-3.7 million), the aerodynamically sleek and hand made, fiberglass-reinforced, polyester resin core, blind-riveted sheet aluminum, and rubber-coated polyester resin objet sold to an anonymous phone bidder who beat out two other telephones. It is number 10 from an edition of 10 plus four-artist proofs and one prototype. It was the seventh time a Newson Lockheed Lounge has appeared at auction.

Newson made the experimental chair in Sydney in the late 1980s, years before he attained worldwide fame as a multi-faceted designer in everything from a dish rack to a Ford concept car. He sculpted the prototype out of a piece of foam, “the exact same way you’d create a surfboard,” noted the Australian-born and -bred designer in a monograph on his work.

The particular example first sold at auction at Christie’s Contemporary Art Evening Sale in May 2000 when it made a then-record $105,000 (est. $40-60,000). The inclusion of the chair in a Contemporary art sale organized by former Christie’s department head Philippe Segalot caused consternation in the design department, according to several sources at the time.

This example had changed hands privately before this go round and for the past two years has been on loan to the Metropolitan Museum of Art in New York, where it was exhibited in the museum’s Modern and Contemporary art galleries. The Lockheed Lounge has come a very long way in the auction arena as evidenced by its first appearance at Christie’s London in the one-off “The Chair” sale in May 1999, when it was estimated at £35-50,000. It went unsold but found a buyer immediately afterwards, according to Simon Andrews, Christie’s international specialist in 20th-century decorative art and design.

The Newson record was topped again at Phillips de Pury New York in May 2010, when the Lockheed Lounge prototype, easily recognizable with its white feet instead of the black rubber-coated feet in the rest of the edition, sold for a whopping $2,098,500 (est. $1-1.5 million). It was sold by the financially beleaguered collector Halsey-Minor, who had acquired it from design dealers Sebastian + Barquet. That Lockheed Lounge prototype had sold at Sotheby’s New York 20th Century Design sale in June 2006 for $968,000.

Talking about the price jumps, Andrews observed, “It illustrates the advantage of taking a historical perspective on objects. All markets are guided by hype about whatever the latest new thing has just come out of the Milan furniture fair but really, we all benefit from a degree of hindsight to really appreciate what those truly resonant objects are going to be.”

Newson remains the world’s most expensive living designer at auction. Phillips’ Evening Design Sale overall made £6.1 ($9.2 million), with 44 of the 56 lots sold for a sale through rate of 79 percent by lot. After the top lot Newson, nothing else came close.