Skip to contentSkip to content
Artnews
Modigliani Nude Makes $157.2 M. in Uneven Impressionist-Modern Sale at Sotheby’s That Totals $318.3 M
May 15, 2018 by Judd Tully 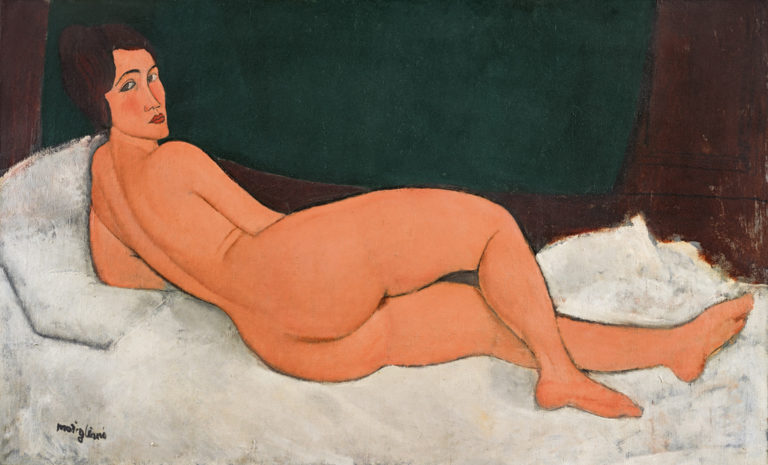 There was no debate over the star lot in Sotheby’s evening sale of Impressionist and modern art earlier this evening. At nearly five feet wide, Amedeo Modigliani’s trophy nude, Nu couche (sur la cote gauche), 1917, is the largest in the painter’s storied series of 22 nudes. With its horizontal format, it is also the only one to encompass the entire figure of the reclining model, who is propped against a white pillow and staring over her right shoulder directly at the viewer with bold confidence. Her bright red lips and dark hair contrast strikingly with the expanse of exposed, and seemingly endless flesh, making for a spectacular and classical odalisque. The painting was featured in Tate Modern’s recent blockbuster Modigliani exhibition and graced the cover of the catalogue printed for the sale at Sotheby’s. The house gave it an unpublished presale estimate in the celestial—and unprecedented—region of $150 million.

And yet, she captured just a single bid at $139 million on the telephone, presumably to the house’s prearranged irrevocable bidder. With fees, the painting sold for $157.2 million.

Still, that ranks as the highest price for any lot sold in Sotheby’s history, and the fourth most expensive work of art sold at auction, trailing a Leonardo, a Picasso, and another Modigliani nude. (It comes in second to the standing Modigliani record, set for Nu couche from 1917–18, which sold at Christie’s New York in November 2015 for $170.4 million to Chinese collector Liu Yiqian.) And it’s a big jump on the sum the painting made when it last sold at auction, at Christie’s New York in November 2003, for a then-record $26.8 million to Irish thoroughbred horse breeder and business tycoon John Magnier, who consigned it to Sotheby’s.

It also represented a full half of Sotheby’s total haul for the evening, which came in at a rather underwhelming $318.3 million, inclusive of fees, which nicked the low end of presale expectations pegged at $307.4–$378.1 million. Thirteen of the 45 lots offered in the sale failed to find buyers, for a chubby buy-in rate by lot of 28.9 percent. No individual artist records were set.

With the help of the Modigliani, the tally easily shot past last May’s $173.8 million total for the 37 lots sold, a rise of 83 percent. Twenty-nine of the 32 lots that sold made more than a million dollars, inclusive of fees, and of those, six sold for over $10 million. Fifteen of the lots offered were backed by confidential financial guarantees, either entirely by Sotheby’s or, as in the case of the Modigliani, by so-called “irrevocable bids” by anonymous backers who can receive a negotiated financing fee for their risk-taking.

The evening got off to a fragrant and fresh-to-market start with Marc Chagall’s charming interior scene featuring a flying violin-playing figure, Fleurs de printemps (La Cruche aux fleurs de printemps) from 1930, which made $2.54 million, gliding past its high presale estimate of $1.5 million.

The following two lots, though relatively modest in value, carried extra news value, both being deaccessioned from the Pittsfield, Massachusetts–based Berkshire Museum, which won a bitter court battle last month for permission to sell as many as 40 works from its collection to benefit its shrinking endowment with an infusion of more than $55 million. 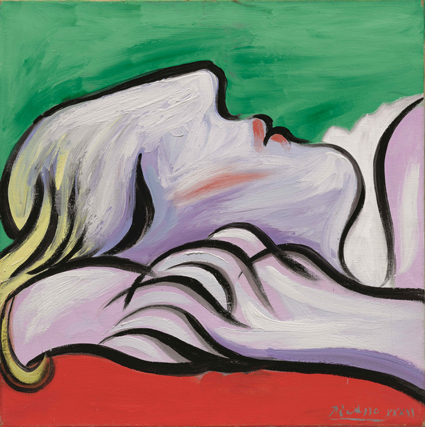 Not about to let the works go easily, protesters lined the sidewalk in front of Sotheby’s York Avenue headquarters before the sale, waving banners with such messages as “public art is not a cash cow.”

“Passions run high this week,” said Hope Davis, a spokesperson for the rallying group, Save the Art-Save the Museum. “This is an unethical deaccession of an important regional collection and our presence here is to discourage other museums from following a similar path and raising public awareness.”

It was difficult to ascertain whether the polite protesters put a damper on bidding for the two works because the entire evening was restrained.

The Picasso was backed by an irrevocable bid.

Values shot higher with Picasso’s serene and sensual cropped visage of his lover and muse Marie-Thérèse Walter in Le Repos from 1932 that sold to another telephone bidder, this one manned by Patti Wong, chairman of Sotheby’s Asia, for $36.9 million (est. $25 million–$35 million). One of the underbidders was Melanie Clore of London’s Clore Wyndham Fine Art Limited.

That piece last sold at auction at Sotheby’s New York in November 2000 for $7.9 million and tonight it was the highest price for the eleven Picassos on offer. Overall, however, it was a rough evening for Picasso: five of them failed to sell, the result of overly optimistic estimates.

Georgia O’Keeffe’s luminous landscape, Lake George with White Birch from 1921, which seemed slightly out of place—her work usually appears in American painting sales—sold to another telephone bidder for a whopping $11.3 million (est. $4 million–$6 million), as did Mary Cassatt’s lovely A Goodnight Hug from 1880 in pastel on brown paper that raced to $4.52 million (est. $700,000–$1 million). New York dealer Jill Newhouse was the underbidder; an anonymous phone bidder won it. 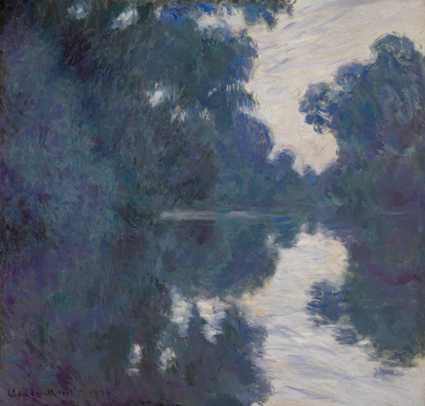 Back in high-value, blue-chip territory, Claude Monet’s lush and atmospheric scene from one of his more admired and weather tempered series, Matinee sur la Seine from 1896, sold to another telephone bidder for $20.6 million (est. $18 million–$25 million), one of the few major lots coming to market “naked”—that is, without a guarantee.

And Fernand Léger’s precise and chromatic interior from November 1918, Le Darnier jaune, brimming with the energy and renewed color of postwar Paris, sold for $5.87 million (est. $6 million–$8 million). It was backed by a Sotheby’s guarantee.

The Monet last sold at Sotheby’s New York in November 2000 for $5.7 million and the Léger’s last outing was in the Yves Saint Laurent and Pierre Berge single-owner sale at Christie’s Paris in February 2009, where it made €3.7 million.

Sculpture was somewhat sidelined, as Alberto Giacometti’s iconic and appropriately elongated feline, Le Chat, from a 1955 lifetime cast (est. $20 million–$30 million) was pulled from the sale and rescheduled to be sold at the firm’s June evening sale in London.

Quirkily advanced for its time, Francis Picabia’s greenish hued double portrait, Sous les oliviers (Coquetteri), from circa 1924–27, based on a found postcard of an embracing couple and one of the artist’s so-called “monster” paintings, sold for $2.54 million (est. $2 million–$3 million). It came backed with an irrevocable bid and last sold at Sotheby’s London in June 2008 for £937,250. Though lacking figures, Edvard Munch’s moody, star flecked nightscape, Sommernatt (Summer Night), from 1902, sold for $11.3 million (est. $10 million–$15 million). 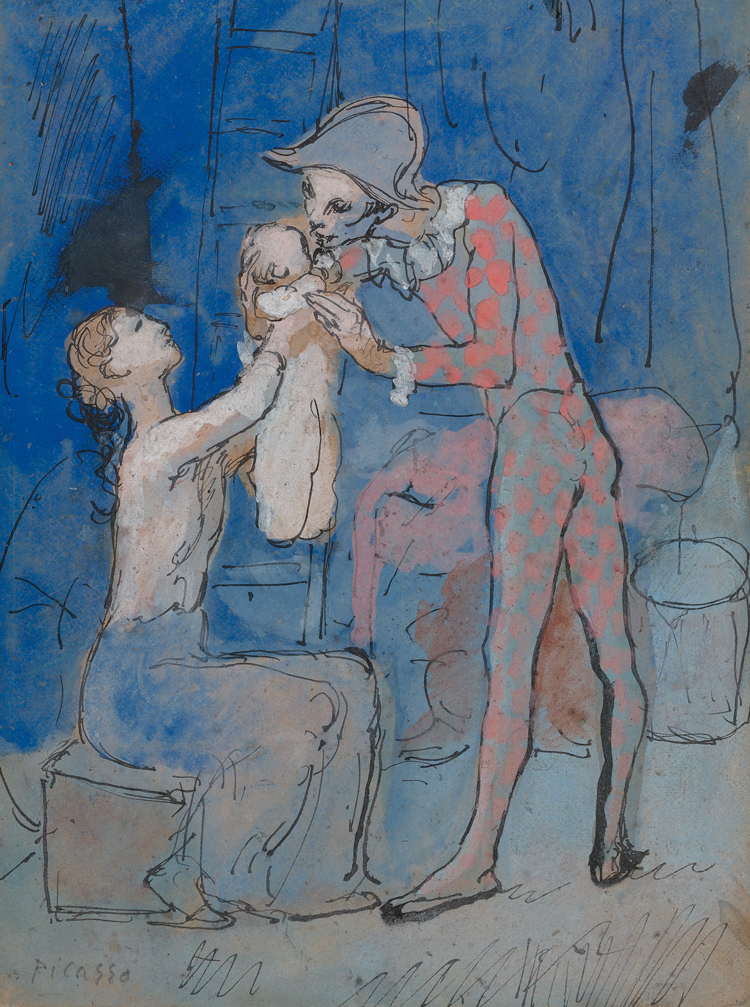 Back on the rough-and-tumble Picasso circuit, the page-sized and touching Rose Period composition in gouache and ink on card, laid down on panel, Famille d’Arlequin, from 1905, sold to another telephone bidder for $11.5 million (est. $12 million–$18 million).

The Picasso came to market backed with a Sotheby’s guarantee and sold at Sotheby’s London in June 2008 for $9.8 million, as did the artist’s late and lively Femme au chapeau assise buste (1962), which sold to New York dealer Christophe van de Weghe for $5.31 million (est. $4 million–$6 million).

“It’s a gorgeous painting,” said van de Weghe as he exited the salesroom, “and my client was prepared to go much higher.”

Asked why the evening action appeared so restrained, van de Weghe said, “I think there was a lot of mediocre-quality works in the sale and [things were] a little bit too highly estimated.”

The sense of over-ambitious estimates and some less-than-stellar offerings was echoed by London adviser Hugo Nathan of Beaumont Nathan, who opined, “If there’s not great material, people have many other choices and can wait for other times.”

The evening action resumes Tuesday at Christie’s with a higher-valued round of Impressionist and modern Art.