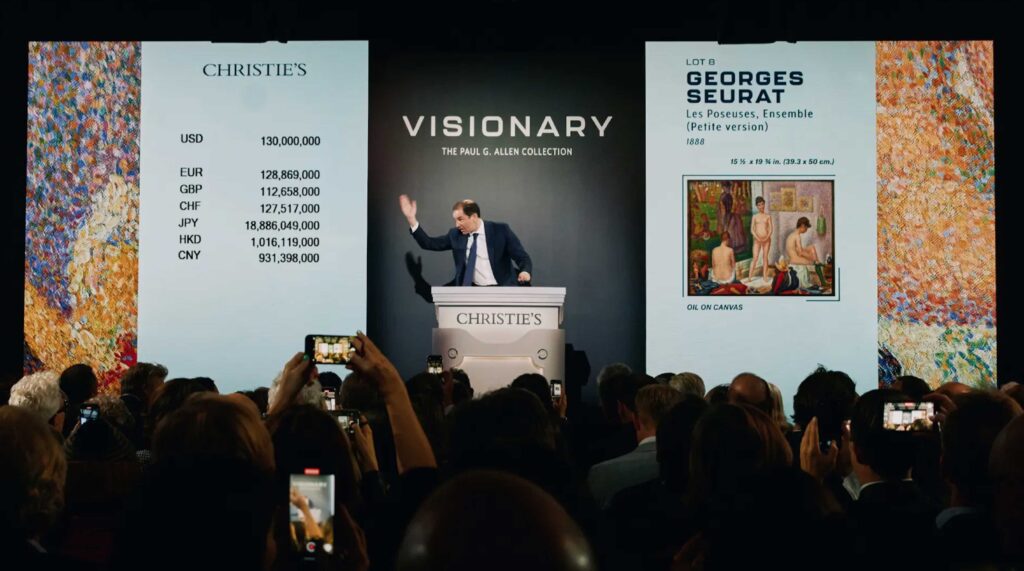 Studded with masterpieces ranging from Botticelli to Seurat, the august collection of the late Microsoft co-founder Paul Allen fetched a record-shattering $1.5bn at Christie’s on Wednesday evening in New York.

The hammer total for Wednesday’s evening sale was $1.296bn, with all 60 lots selling, pushing the take near the top of the house’s pre-sale expectation of$1bn-$1.38 bn (before fees). Christie’s will offer another tranche of Allen works on Thursday.

All of the lots came to market backed by financial guarantees, either secured by so-called third party guarantees or those backed by Christie’s. In that insured sense, the evening qualified as a “white glove” sale, with 100% of the incredible bounty sold. Twenty artists’ auction records were broken and five works sold for over $100m, including fees, a feat in itself.

The Calder was snagged by Deborah Robinson of Art Market Advisors, according to the Baer Faxt newsletter, and that same bidder scooped up three other works with her paddle numbered 282.

The index card-sized Picasso, like many of its brethren in the sale, bears a sterling provenance—in this instance passing from pioneering American collector John Quinn to film-maker Mike Nichols prior to joining Allen’s collection.

Before the big guns started to fire, Edward Steichen’s gum-bichromate over platinum print from 1905, The Flatiron, capturing the dusk-lit New York City landmark, set an artist record when it hammered for $10m ($11.8m with fees), more than triple its high estimate of $3m—though not quite a new record for the medium. It was the sole photograph in the painting-dominated, ultra-blue-chip lineup.

The appetite for top-class works was ravenous from early on, with the sixth lot, Paul Signac’s Pontillist maritime jewel, Concarneau, calme du matin (Opus no.219, larghetto) from 1891 realising a record with a hammer price of $34m ($39.3m with fees). Allen had acquired it at Christie’s New York in November 1998 for a then-record $4.4m (including fees). 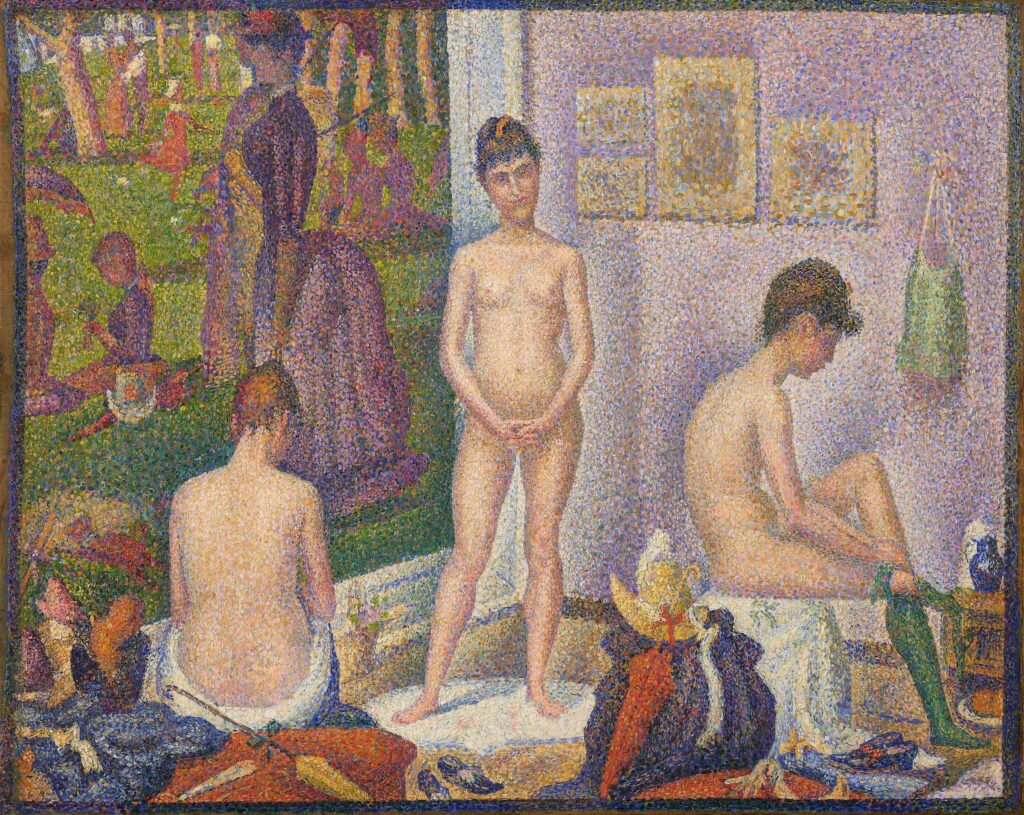 A stunning and storied work by Georges Seurat, Les Poseuses, Ensemble (Petite version) from 1888— featuring a trio of nude models at rest in the artist’s studio with his masterpiece, Un dimanche après-midi à l’île de la Grande Jatte (1884-86) visible in the background—sold to an anonymous telephone bidder for a record hammer price of $130m ($149.2m with fees), far surpassing its unpublished estimate in excess of $100m.

Allen, who died of lymphoma in 2018 at age 65 and who also owned professional sports teams in Seattle and Portland, as well as two museums devoted to pop culture, had acquired the Seurat painting privately for an undisclosed sum in late 1999 through New York dealer and former Sotheby’s Impressionist and modern head David Nash. It last sold at auction at Christie’s London in 1970 for approximately $1.1m (including fees), or $8.1m in today’s currency.

Again, the picture is loaded with famed owners, from John Quinn to Philadelphian art patron Henry Plumer McIlhenny. Apparently McIlhenny, the onetime chairman of the Philadelphia Museum of Art, sold the picture in London to finance construction of a ballroom for his city mansion. He figured it was fine to part with it because the nearby Barnes Foundation had the full-blown, eight-foot-wide version, according to David Nash, who scouted paintings for Allen between 1997 and 2005, often times in tandem with Allen’s curator, Pablo Schugurensky.

The masterpieces kept churning. Paul Gauguin’s Tahitian scene Maternité II (1899), featuring a bare-breasted mother nursing her infant with two companions standing behind her, raced to a $92m hammer price ($105.7m with fees), in line with its unpublished estimate in excess of $90m. Allen acquired it at Sotheby’s New York in November 2004 for a then-record $35m ($39.2m with fees). 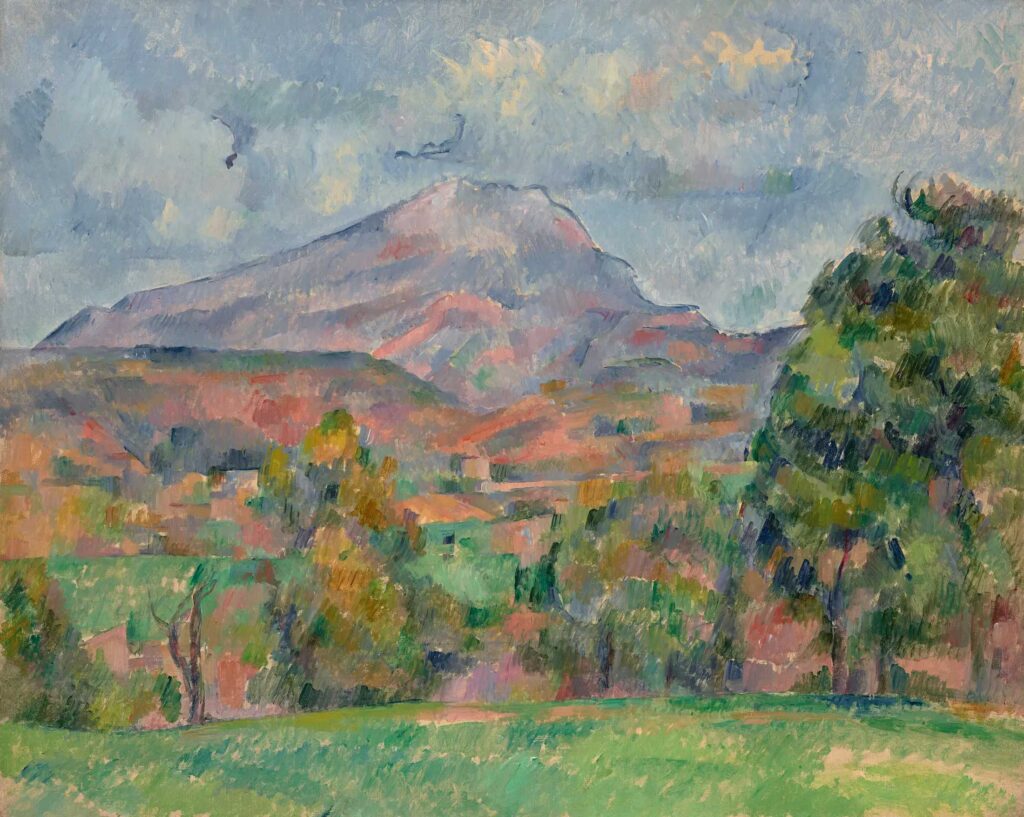 If one was to pick a take-home trophy of the highest order from Wednesday’s sale, it could easily have been Paul Cézanne’s iconic landscape, La Montagne Sainte-Victoire (1888-90), which soared to a record hammer price of $120m ($137.7m with fees), right on target of its unpublished estimate in excess of $120m. Allen acquired it at Phillips de Pury & Luxembourg New York in May 2001 for $35m ($38.5m with fees). The price Wednesday night doubled the Cézanne auction record, which had previously been set by Rideau, cruchon et compôtier at Sotheby’s New York back in May 1999, when it fetched $60.5m with fees.

Though quite far behind price-wise, Claude Monet’s stunning and perfect-condition Waterloo Bridge, soleil voilé (1899-1903) sparked a round of torrid bidding and went for a hammer price of $56m ($64.5m with fees), nonetheless falling short of its on-request estimate in excess of $60m. Allen acquired it at Christie’s New York in November 1997 for $8.2m (with fees).

Landscapes appeared to be one of Allen’s big interests, as evidenced by the 39 works in the traveling museum exhibition, Seeing Nature Landscape Masterworks from the Paul G. Allen Family Collection, shown at the Portland Art Museum in 2015-2016, a number of which—including the Cézanne—reappeared Wednesday night.

Of that elite cast, Gustav Klimt’s Birch Forest from 1903, depicting a close-up view of tree trunks and foliage, brought a hammer price of $91m ($104.5m with fees), in line with its unpublished estimate in excess of $90m. Allen bought the restituted painting at Christie’s New York in November 2006 for $36m ($40.3m with fees).

Vincent van Gogh’s whip cream-like surface in Verger avec cyprés, dating from 1888 and painted in Arles, proved irresistible to bidders. It sold for a hammer price of $102m ($117.1m with fees), in keeping with its on-request estimate in excess of $100 million.

Impressionism and the South of France were not Allen’s only passions. His taste roamed other epochs and regions, including Venice, with such stars as Canaletto’s sweeping view busy with pedestrians, The Piazza San Marco, Venice, looking east towards the basilica, which rose to a hammer price of $8.8m ($10.4 m with fees), outperforming its high estimate of $7m. Allen acquired it at Sotheby’s London in December 2014 for $8.5m (with fees), making it one of the night’s few entries that didn’t absolutely eclipse earlier price points.

Still in Venice, Edouard Manet’s watery view with landmarks in the distance, Le Grand Canal à Venise (1874) floated to a $45m hammer price ($51.9m with fees), on the low end of its $45m-$65m estimate. (Allen’s collection also includes stellar Venetian views by Claude Monet and a masterpiece water lily painting, but they are absent from Christie’s lineup.) 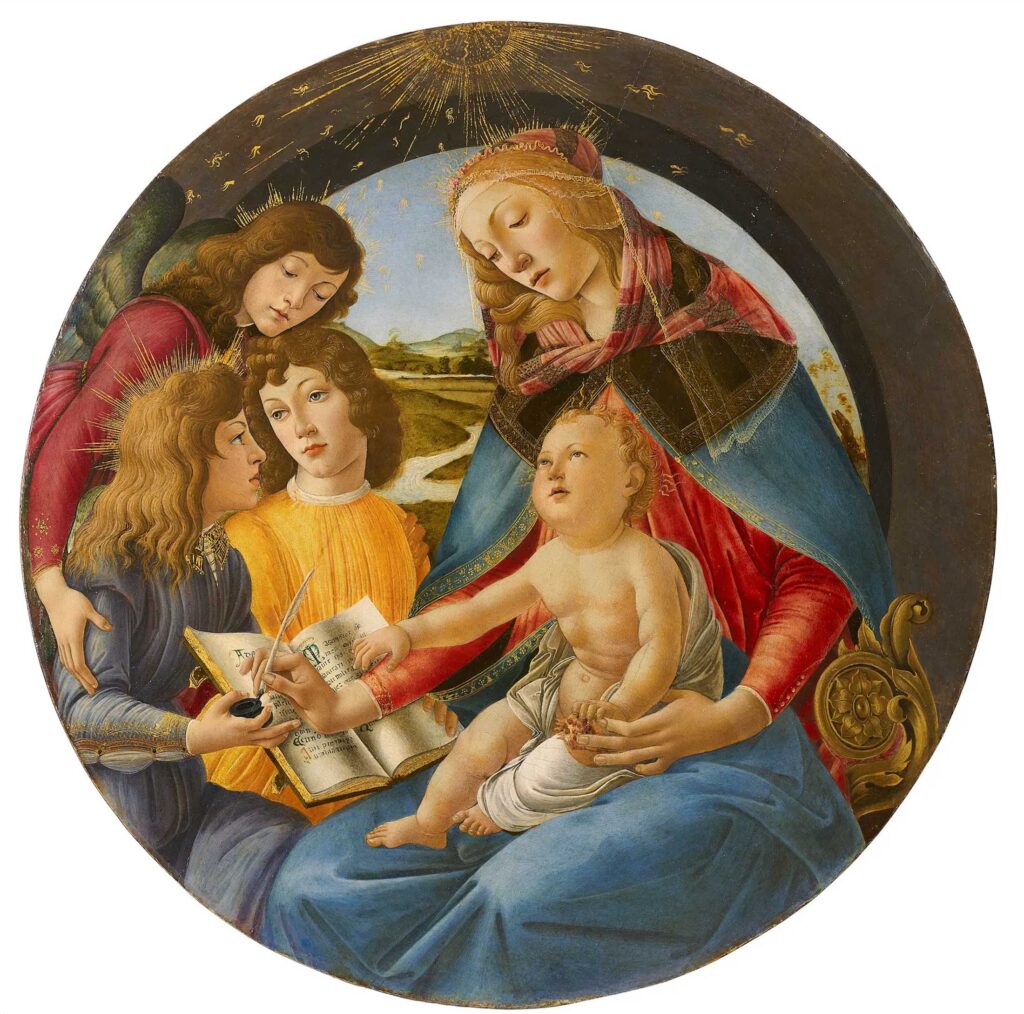 Moving back in time from San Marco in the 18th century to Sandro Botticelli’s Florentine tondo from the 15th century and executed in tempera, oil and gold ground on panel, the shimmering Madonna of the Magnificat hammered at $42m ($48.4m with fees) to an anonymous telephone bidder. That result put the Old Master picture comfortably in the realm of its unpublished estimate, in excess of $40m. Allen acquired the Botticelli privately for an undisclosed sum in 1999. 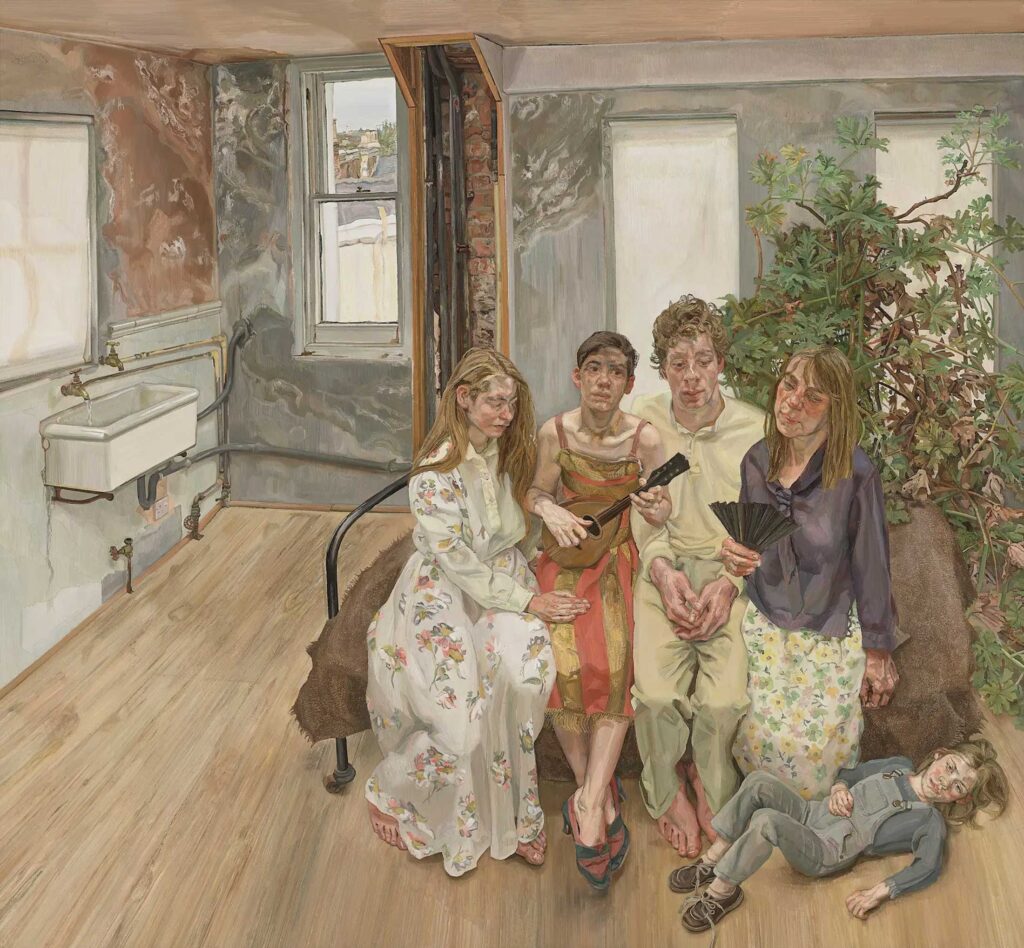 Though it remains difficult to characterise his overall taste or collecting strategy, apart from sticking to top-tier examples, Allen also roamed to British and American artists, including Lucian Freud’s remarkable composition, Large Interior, WII (after Watteau) (1981-83). It depicts what appear to be four family members squeezed together on a bed with a younger child gazing up to the viewer from the floor. It fetched a record $75m hammer price ($86.2m with fees), in line with its unpublished estimate in excess of $75m.

A light-filled and undeniably sexy Andrew Wyeth painting, Day Dream (1980), executed in tempera on panel and depicting a sleeping nude under a mosquito net, took the saleroom by storm. It eventually sold for a hammer price of $20m ($23.2m with fees), a new auction record for the artist and more than six times its high estimate of $3m.

Remarkably still—and unusually for a dispersal of this magnitude—all of the net proceeds will benefit the Paul G. Allen Family Foundation to support philanthropy “pursuant to Mr. Allen’s wishes”, according to a Christie’s spokesperson.

“The evening was a tremendous success,” said private dealer Michael Altman, who bid on at least four American works without success, including a try for the Wyeth up to $13.5m. “It started from very good material to never-again masterpieces. We’ll never see paintings that good by those respective artists ever again.”

Christie’s second sale of material from Allen’s collection, a day sale featuring 95 lots, kicks off at 10am Thursday (10 November) in New York. Next week, Sotheby’s, Phillips and Christie’s will hold their marquee autumn evening sales of 20th- and 21st-century art.