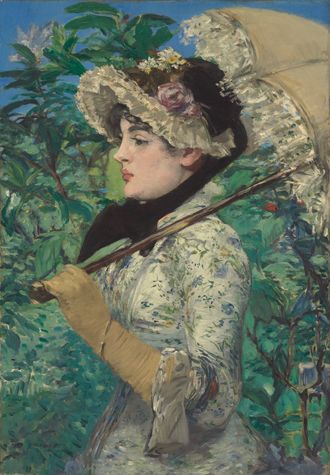 An Impressionist-era painting by Edouard Manet starred in an otherwise modest Impressionist and Modern evening sale on Wednesday that tallied $165,635,000.

The sale was relatively small, especially in relation to arch-rival Sotheby’s massive $422.1 million result on Tuesday evening. But only four of the 39 lots offered failed to sell, for an impressively slim ten percent buy-in rate by lot. One artist records was set, but it was a doozy, and 31 of the 35 lots that sold made over a million dollars. Of those, six made over five million dollars. The sale’s result trumped last November’s $144.3 million tally for 35 lots sold.

Soon after, an Auguste Rodin lifetime bronze cast of a prostrate nude, “Damaide, grand modele” from circa 1895-90, offered from the estate of philanthropist and spirits mogul Edgar M. Bronfman, brought $1,685,000, against an estimate of $500-700,000. Bronfman had acquired it back in November 1983 at the old Sotheby’s Parke Bernet salesroom for $140,000, a huge sum at the time.

A pair of modestly scaled though high-quality Pablo Picasso Cubist offerings on paper from a private collection performed brilliantly. “Tete de femme” from 1909, in brush and brown ink on paper and featuring the strong likeness of the artist’s companion Fernande Olivier, made $1,085,000 (est. $1-1.5 million), while “Figure” from 1913, a pristine and energy-packed cut-and-pasted-paper collage, sold to private advisor Jennifer Vorbach for $4,309,000 (est. $1.5-2.5 million). London private dealer Ivor Braka was the underbidder.

Both the Picasso works hailed from the same private collection, which was also the source of Gino Severini’s rare Futurist-styled “Etude pour Autoportrait au canotier” from 1912-13, in charcoal pastel and white and blue chalk on buff paper. The Severini sold to Braka for a whopping $4,757,000 (est. $1-1.5 million). Jennifer Vorbach was the tenacious underbidder.

“I just thought it was one of the fullest and most developed works on paper by Severini,” Braka said as he rushed out of the salesroom, “and it came with absolutely the date people want. He’s always been a favorite artist of mine.”

He added, “I wish it was a picture I could keep.”

The medieval Bohemian town of Krumau, the birthplace of the artist’s mother, is the subject of the painting, which has been at the center of a drawn out legal battle over ownership stemming from its status during the Nazi era.

The only undisputed blockbuster of the evening was the vivacious cover lot, Manet’s “Le Printemps” from 1881, depicting a stunning Parisian beauty in three-quarter profile, decked out in long gloves, a floral patterned dress, an elaborate, flower festooned hat and gripping an open parasol. The painting triggered a protracted bidding war and sold to New York old master paintings dealer Otto Naumann for a record-shattering $65,125,000 (est. $25-35 million).

Ambrose Naumann, the dealer’s son and an assistant at the Otto Naumann Gallery, bid for the painting on behalf of his father, who was at his side at the front of the salesroom. The Naumanns entered the fray late in the game, after an exhausting battle between telephone bidders.

“I can’t say much, I’m afraid,” Otto Naumann said in an e-mail exchange after the sale, when asked about the buyer he and his son were bidding for. “The institution will announce tomorrow I believe.” Though he wouldn’t say more, odds are high that the Getty Museum is the new owner of the Manet.

Top-class works by Manet are rare to auction, and this example, which was on long-term loan to the National Gallery of Art in Washington from 1993 to last May, is certainly top class.

The painting, which was conceived to be part of an ultimately-abandoned series based on the four seasons, shows the Paris actress Jeanne Demarsy, who appears boldly modern, fashionable and confident, wielding her umbrella as a soldier would his rifle. It was an instant success, and was featured alongside Manet’s masterpiece “Un Bar aux Folies-bergere” from 1881-82 at the Salon of 1882.

Given Manet’s fame and art historical importance, the fact that only eight of his works have sold for over ten million dollars at auction points up how rare it is for major works by the artist to come to market.

“Le Printemps” easily ranks as the most expensive Impressionist era painting to sell this week, beating out a lesser van Gogh at Sotheby’s that made $61.7 million.

Other highlights of the sale included an early and almost surreal Joan Miro landscape, “Tuilerie a Mont-roig” from 1918, a wide-angled view of the 25-year-old artist’s family farm that brought $8,677,000 (est. $5-8 million). Dealer David Nahmad was the underbidder to the telephone winner.

In the Surrealist realm, Rene Magritte’s “l’ombre celeste” from 1927, another early work with a somewhat darker palette, featuring a fantastic brick wall with a shard of blue sky super-imposed in the middle, sold for $2,741,000 (est. $2-3 million). The painting carried a financial guarantee.

Another Magritte also had a guarantee, “Mesdemoiselles de l’Isle Adam” from 1942, an elaborate composition showing a trunk load of the artist’s props. It sold to another telephone bidder for $4,981,000 (est. $5-7 million).

Given the immensely deep pockets of the current art market, it would be fascinating to see a major Henri Matisse appear at auction. The likelihood of that is apparently remote, however, so the market has to settle for lesser fare.

On Wednesday, Christie’s had Matisse’s “Nu assis, fond bleu,” a decidedly sexy composition from 1936 featuring the artist’s favorite model (Lydia Delectorskaya) reclining on an armchair with splayed legs and a gold bangle matching her blonde hair. It sold for $5,429,000 (est. $4-6 million).

The lone Alberto Giacometti in the sale, “Stele II” from 1962—a bronze cast and modeled after Diego Giacometti, the artist’s brother—overachieved at $9,909,000 (est. $4.5-6.5 million). Its success was no doubt inspired by the $100.9 million price achieved at Sotheby’s on Tuesday for Giacometti’s “Chariot.”

Christie’s had little to complain about overall, though it did take a big financial hit with the pricey buy in of the late and large-scaled Fernand Leger “Les Constructeurs avec arbre” from 1949, which bit the dust at $15.5 million (est. $16-22 million).
The house guaranteed the work and bet wrong that it would find a buyer

The evening action resumes on Monday at Sotheby’s with a single-owner sale sourced from the late and great art collector/patron, Mrs. Paul “Bunny” Mellon.