Skip to contentSkip to content
Blouin Artinfo
Led by Modigliani, Christie’s Brings in Half a Billion With “The Artist’s Muse”
November 10, 2015 by Judd Tully 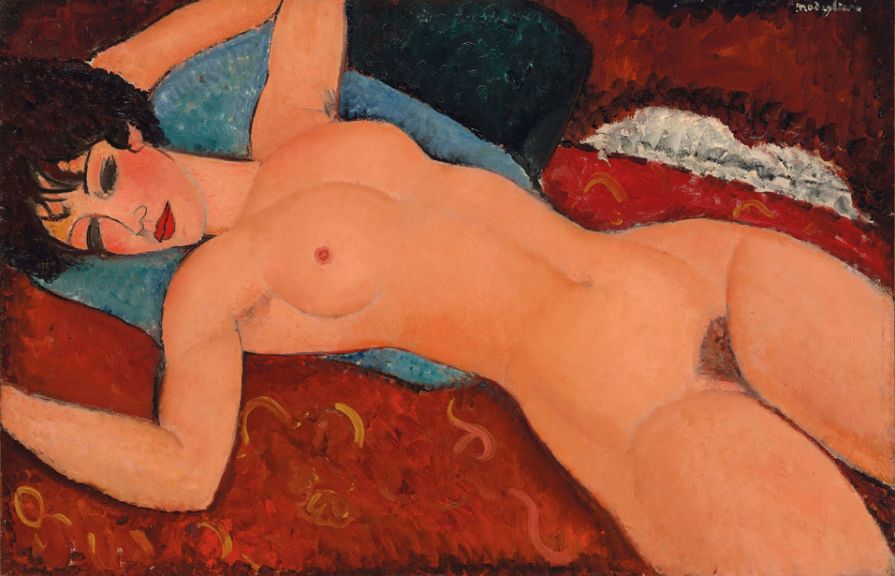 Powered by two record-setting 20th century masterworks, by Amedeo Modigliani and Roy Lichtenstein, Christie’s “Artist’s Muse: A Curated Evening Sale” realized $491,352,000 for the 24 lots that sold. The tally, aided by a handful of strong performers, robustly hurdled the low-end of the $440-545 million estimate range.

Even so, ten of the 34 lots offered failed to find buyers, for a rather flabby 29 percent buy-in rate by lot. And four of those ten — whose estimates added up to between $18.7 and 25.3 million — were guaranteed by Christie’s, including a Willem de Kooning “Woman” from circa 1952-53 estimated at $14-18 million; Christie’s now owns the spurned material and will soldier on to try and sell it privately to offset the loss. (A big chunk of the night’s lots were guaranteed, with a total of 18 guarantees evenly split between nine that were fully backed by Christie’s and nine representing third-party interests or some combination of Christie’s and anonymous third parties.)

Still, despite some jarring speed bumps, twelve lots sold for over $10 million and more remarkably, six exceeded the $20 million mark.

Five artist records were set, led by “Nu couché,” the record-shattering $170.4 million Modigliani nude that came a few bids close to matching the mark set by Pablo Picasso’s “Les femmes d’Alger (Version ‘O’)” from 1955, which fetched $179.3 million last May at Christie’s, the highest price for any work ever sold at auction.

The evening got off to a less-than-torrid start with Pablo Picasso’s small charcoal and estampe on paper, “Le Peintre et son Modèle” from 1933, featuring his young muse and still-secret lover Marie-Therese Walter, which made $1,685,000 (est. $1.2-1.8 million). It was backed by a third party guarantee.

The heavily marketed muse theme continued with Ernst Ludwig Kirchner’s carved and painted Expressionist sculpture in oak “Tanzerin mit gehobenem Bein,” a unique work from 1913 that sizzled at $8,005,000 (est. $3.5-5.5 million). The work carries an extensive exhibition history dating from 1917, including its appearance in the 2010 Kirchner retrospective at the Stadel Museum in Frankfurt.

Another Kirchner, a wildly colorful lakeside bathing scene painted at the height of the Brucke Group’s influence, “Im See badende Madchen, Moritzburg” from 1909, sold to a telephone bidder for $13,605,000 (est. $10-15 million).

The female form was strongly in evidence throughout the evening, though Auguste Rodin’s beautifully posed bronze cast “Eve au Rocher, Petit Modèle – Modèle Aux Pieds détaillés,” from a circa 1900, bought in at a chandelier bid (as in imaginary) $2.2 million. (est. $2.5-3.5 million). It had last sold at Christie’s New York in May 2007 for $2.6 million.

Sculpture played a surprisingly large role in this one-off sale, the second time that Christie’s had mixed Modern and contemporary works within a themed framework. Another sculptural work, Paul Gauguin’s haunting “Therèse” from circa 1902-03, a 26 inch high, russet colored, carved rose wood figure studded with gilding and copper nails, sold to a telephone bidder after an epic bidding war for $30,965,000 (est. $18-25 million). It was backed by a third party guarantee, meaning that an anonymous backer received an undisclosed piece of the upside for his or her trouble. New York dealer Andrew Fabricant of Richard Gray Gallery and art advisor Stephane Connery were part of the posse of underbidders.

The sculpture is believed to depict the former servant and possible mistress of the local Catholic bishop, whom Gauguin, virulently anti-Catholic, had quarreled with. It was recently on view at Fondation Beyeler in Basel in the critically acclaimed “Paul Gauguin” retrospective, seen by legions of admirers during the Art Basel Art Fair in June.

A second Gauguin, “Jeune homme `a la fleur,” painted in Tahiti in 1891 — first owned by Henri Matisse, and later by the pioneering American collector John Quinn as well as the Museum of Modern Art — made $13,605,000 (est. $12-18 million). It had last sold at auction at Christie’s New York in November 1987, when it made $2.1 million, and it came back to market from the collection of the globe-trotting Greek collector Dimitri Mavrommatis, a frequent bidder and buyer at high-stake auctions.

Mavrommatis underbid, for example, on Mark Rothko’s “Untitled (Lavender and Green),” which sold for sold for $20.4 million at the A. Alfred Taubman Masterworks’ sale at Sotheby’s last week.

“I’m very happy,” he said as he stood outside the salesroom moments after the bidding on Monday. “And Christie’s did a fabulous job.”

The collector explained that the painting was the first serious work his family bought back in 1987. “I would be happier if it went higher,” he said, “but they put a high estimate on it.”

Pausing for effect, Mavrommatis added, “Sotheby’s estimated [the Gauguin] at $6 million and it went for twelve,” indicating he had also shopped it at the competing auction house.

Many of the artist stars of the 19th and 20th centuries were in contention in Monday’s sale. Paul Cézanne, for example, was represented by his iconic pipe smoker, “L’homme a la pipe (etude pour un joueur de cartes) (recto),” a watercolor from 1892-96, which sold to advisor Stephane Connery of Connery & Associates Fine Art for $20,885,000 (est. $18-25 million). It had been exhibited most recently in London at the Courtauld Gallery’s stunning show, “Cézanne’s Card Players” in 2010-11. It, too, was backed by a third party guarantee.

The evening’s standout star and cover lot, as well as the auction season’s most talked about painting, Amedeo Modigliani’s ravishing “Nu Couché” from 1917-1918, lived up to its pre-sale hype and sold via the telephone to the Long Museum, a private art museum in Shaghai, for a rousing and record $170,405,000 (unpublished estimate in excess of $100 million).

Bidding opened at $75 million and quickly escalated at $5 million increments until tapering off to three and then one million dollar bids as the air got thinner. At least seven bidders were still in the game at the $100 million mark, and helped it eventually reach the massive hammer price of $152 million.

Underbidders included Lower East Side contemporary art dealer Hong Gyu Shin, who placed a bid in the salesroom at $142 million, against a gaggle of telephone bidders.

The work beat the record for the artist by a cool $100 million, set last November at Sotheby’s New York when the limestone sculpture “Tête” from 1911-12 fetched $70.7 million.

The historic and rhapsodically written-about work had long been owned by the late Italian collector Gianni Mattioli, whose world-class collection of masterpieces from the Italian avant garde has been showcased at the Peggy Guggenheim Collection in Venice. Mattioli acquired the painting in 1949.

His daughter and heir, Laura Mattioli Rossi, was the seller; she inherited the work in 1987, according to the entry in Christie’s dumbbell-heavy, 473-page auction catalogue.

“I’m thrilled,” said Naumann, buttonholed in the hallway outside the salesroom. “I don’t understand why the usual suspects didn’t bid against me. Of the things [by Duchamp] that are available, it’s at the very top.”

Unlike the readymade, reclining female nudes were in relative abundance, like Gustave Courbet’s darkly atmospheric “Femme nue couchée” from 1862, measuring 29 ½ by 38 ¼ inches, which sold to a telephone bidder for a record-busting $15,285,000 (est. $15-25 million). The painting had been restituted in 2005 to the heirs of the Budapest collector Baron Ferenc Hatvany, decades after the work was confiscated by the Nazis in 1943. It had subsequently sold to a private buyer, who flipped it at Christie’s.

It shattered the Courbet record set by the landscape “Étretat: Les Falaises” from 1870, which sold for $3.7 million at Sotheby’s New York in November 2013.

In the same category, Lucian Freud’s “Naked Portrait on a Red Sofa” from 1989-91, a poignant work capturing the vulnerable nature of his young model — shockingly, to some, his daughter Bella Freud — failed to sell against its sky-high $20-30 million estimate.

With so much focus on women in oil, wood and bronze, it is interesting to note that not a single woman artist was represented in the sale, making Christie’s appear both hopelessly old school and distantly out of 21st century fashion.

At least not all the women depicted were nude, as evidenced by Roy Lichtenstein’s startled blonde “Nurse” from 1964, a 48-square-inch canvas close-up from the comic book artist Arthur Peddy’s DC Comic pages, which Lichtenstein poached and stripped of any dialogue bubbles. That painting fetched a whopping and record $95,365,000 (unpublished estimate in the region of $80 million). It had last sold at auction at Sotheby’s New York in May 1995 for $1,652,500.

Collector Peter Brant, who owned the painting for a time in the 1970’s, talked about it as he exited the crowded and chilly salesroom. “It’s a great painting and as to the price, it’s hard to determine value with great works,” he said. He added ruefully, “I didn’t sell it because I didn’t like it.”

Of the three Picasso offerings, the late, somewhat mad male figure, “Homme à L’épée” from July 1969, sold to the telephone for $22,565,000 (unpublished estimate in the region of $25 million. It was backed by a third party guarantee and had last sold at auction at Sotheby’s London in June 2009, when the market was weak, for £6.9/$11.4 million.

The intense figure, weighted down by his sword and large-brimmed hat, is both fearsome and comic. Its major claim to fame was its inclusion in the storied Palais des Papes exhibition of his late paintings in Avignon, “Pablo Picasso: 1969-70,” in 1970. The painting served as the poster image for that exhibition, mounted at a time when the octogenarian’s work was largely scorned both by critics and the market. Christie’s guaranteed the painting for an undisclosed price.

Other highlights included Alberto Giacometti’s storied portrait of the writer “James Lord,” who famously wrote about his experience sitting for Giacometti in the artist’s cramped Paris atelier in 1964; it sold to New York/London dealer David Zwirner for $20,885,000 (est. $22-30 million).

While Lord hardly seemed like a “muse,” that thematic conceit made more sense in the case of the alluring Balthus composition “Lady Abdy” from 1935, which sold to New York real estate developer Fredrick Elghanayan for a record $9,909,000 (est. $9-12 million).

“The very rare, important works created a huge amount of energy and bidding tonight,” said Jussi Pylkkanen, the evening’s auctioneer and global president of Christie’s, summing up the sale during a brief press conference after the action concluded.