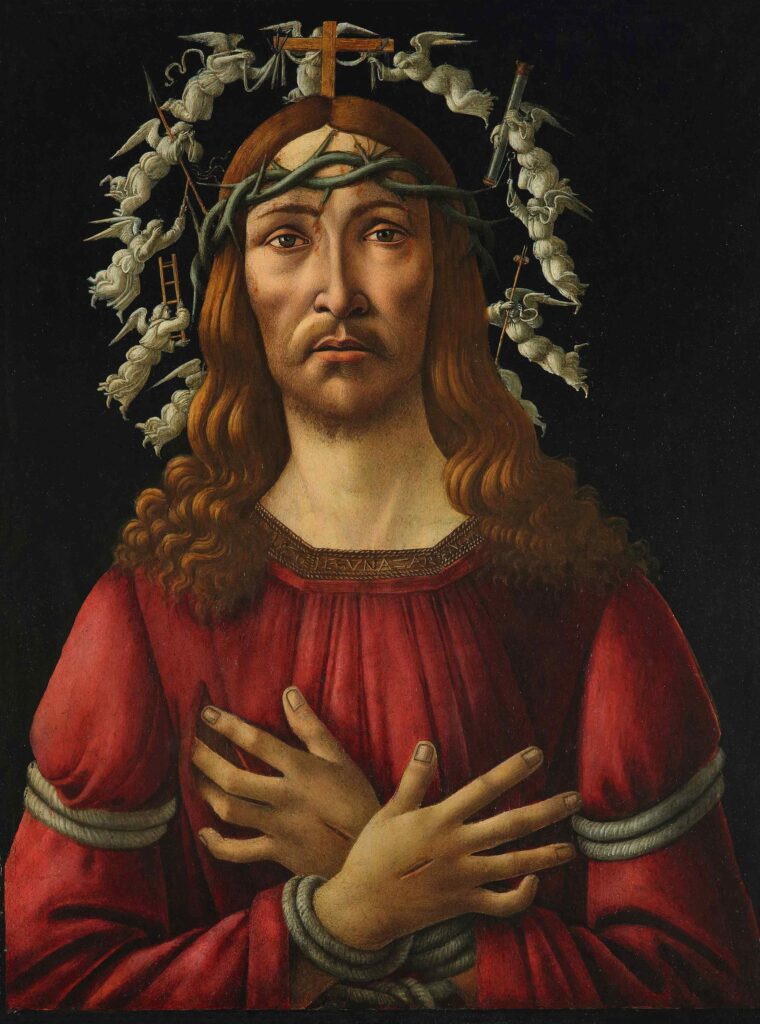 Sandro Botticelli, The Man of Sorrows (around 1500)
Courtesy Sotheby’s

The star lot of the sale, a rediscovered and austere portrait of Christ, hammered just below its estimate

The Man of Sorrows, a rare and moving Sandro Botticelli painting depicting the resurrected Christ from the early 16th century, sold at Sotheby’s Master Paintings and Sculpture Part I auction in New York today for $39.3m ($45.4m with fees).

Promoted by the house as “the defining masterpiece of Botticelli’s late career”, reality did not quite meet expectations as it struggled to match the unpublished pre-sale estimate pegged in excess of $40m. The lot had been backed by a third-party bid, guaranteeing its sale.

Even so, the chunky result became the second-highest Botticelli price at auction, trailing last January’s star lot at Sotheby’s when an early work by the Florentine master, Portrait of a Young Man Holding a Roundel offered from the estate of New York real estate mogul Sheldon Solow, hammered at a record $80m ($92.1m with fees).

Bidding for the late Botticelli, painted around 1500 in tempera and oil on panel, opened at $33m and eventually attracted three telephone bidders. Christopher Apostle, Sotheby’s head of the Old Master department was the underbidder to specialist Elisabeth Lobkowicz’s winning bid. 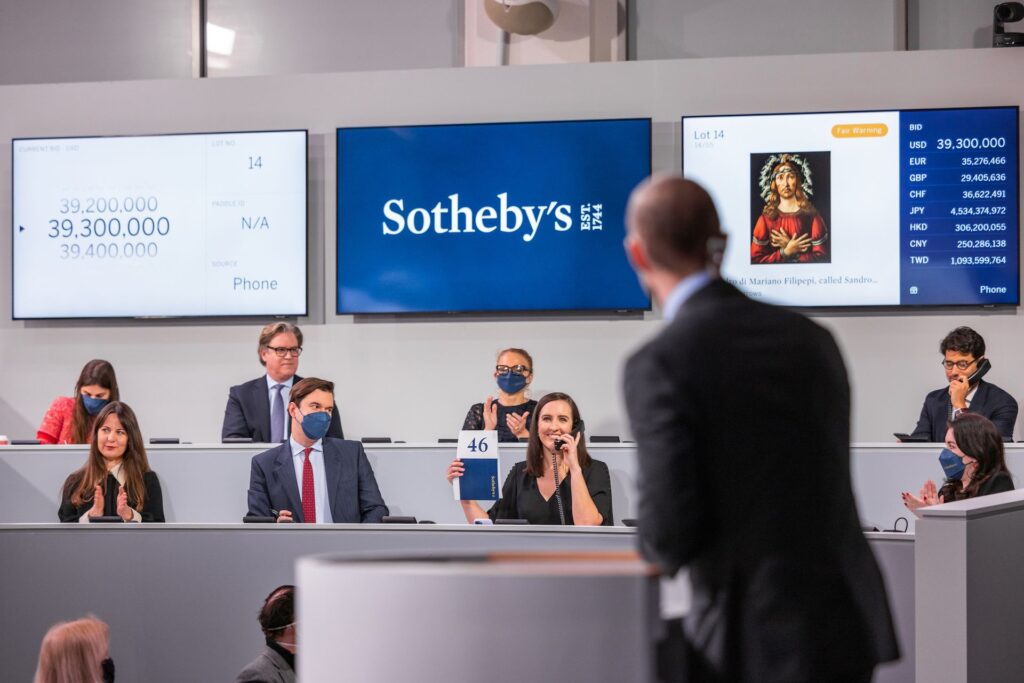 The half-length panel depiction of the resurrected but still tightly bound Christ, outfitted in a pleated crimson robe with hands crossed against his chest and showing the wounds of his crucifixion, is mesmerising to behold despite its heavy veil of varnish. Hooped in balletic fashion around his shoulder-length hair and crown of thorns, a bevy of miniature angels, outfitted with the savior’s instruments of torture provide a fantastical and wildly inventive aura to the work.

It is said that Botticelli became deeply religious late in life and a devout follower of the fiery doomsday preacher Girolamo Savonarola, producing late paintings that bore little resemblance to his more famed and sensual early work, such as The Birth of Venus (1485-86) and Primavera (1470s-80s), both housed in the Uffizi Gallery in Florence.

“It’s a controversial painting,” says Nicholas Hall, a New York old master dealer, about “which people feel strongly. There are those who don’t like late Botticelli and his Savonarola-esque phase, which is considered excessively pious and austere.”

The painting last sold at Sotheby’s London in November 1963 for £10,000 and was attributed in the late 1970s by leading Botticelli scholar and author Ronald Lightbown among the “workshop and school pictures”. Present day curatorial authorities, including Keith Christiansen of the Metropolitan Museum of Art and Lawrence Kantor of the Yale University Art Gallery, consider it an autograph work.

Given the single figure subject and date, it is hard not to think of Leonardo’s Salvator Mundi that sold at Christie’s New York in 2017 for $450.3m (with fees). With that in mind, the Botticelli looks like a bargain.

No details were provided by Sotheby’s on the identity of the anonymous phone bidder and insider market gossip that former Christie’s rainmaker Loic Gouzer and his new company Particle, would make a bid for the painting remained just that.

“Had a client who was interested,” Gouzer said before the auction, “and asked me for advice but bailed out.” 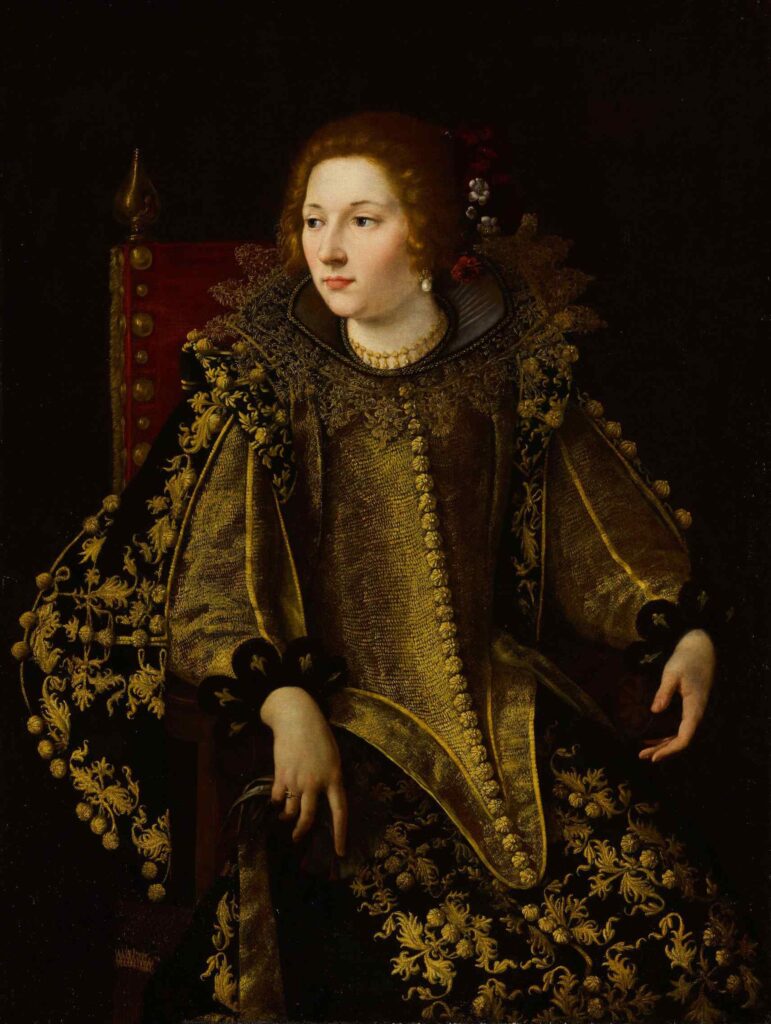 Women artists also took the stage in sometimes rousing fashion, including two large-scale 17th-century works by Artemisia Gentileschi. Her Portrait of a Seated Lady, 3/4 length in an elaborate and gold-embroidered costume, possibly Caterina Savelli, Principessa di Albano rose to $2.2m ($2.6m with fees), within its $2m-3m estimate. And the large, multi-figured outdoor scene Susanna and the Elders brought $1.75m ($2.1 with fees), just under its $1.8m-2.5m estimate. The portrait last sold at Sotheby’s London in July 1999 for $155,500 and the nude Susanna sold at the same house in December 1995 for £194,000 (both including fees). Both works were backed by irrevocable bids.

On the closely watched restitution front, Nicolas de Largillière’s elaborately styled, Regency period Portrait of a lady as Pomona, traditionally identified as the Marquise de Parabère, recently restituted to the heirs of Jules Strauss, sold for $1m ($1.2m with fees). It also came to market with an irrevocable bid.

An outlier, both in terms of era and category, was the sale’s 17th lot, an ancient Egyptian limestone figure from the late Fifth Dynasty (around 2440-2355BCE), featuring a well-muscled male figure clothed in a short wrap-around kilt, soared past its $3m-5m estimate to $8.4m ($9.9m with fees). 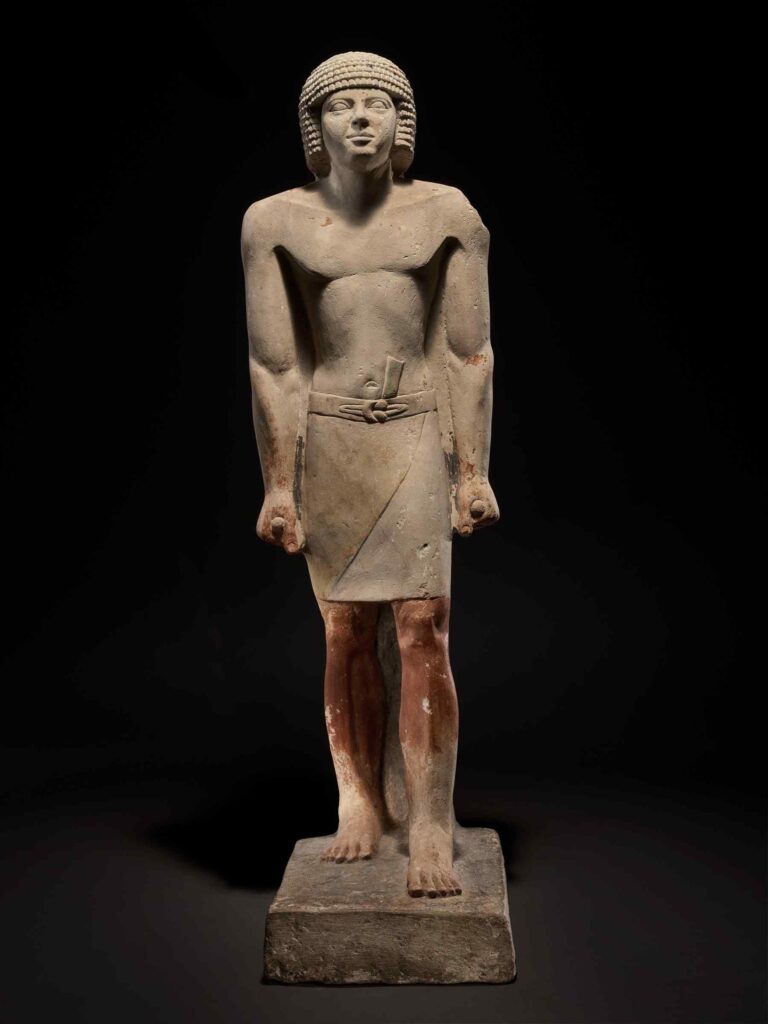 Sotheby’s stopped its antiquities auctions in New York in 2016, moving that category to London and away from the hawkish eyes of the Manhattan District Attorney’s antiquities trafficking unit. There was no worry with this sculpture, long on loan to the Metropolitan Museum of Art, which was excavated at Giza by an archaeology team from the Harvard University Museum of Fine Arts in 1921. It was awarded to the museum by the Egyptian Government Antiquities Service that same year and later became the property of the British Rail Pension Fund before selling at Sotheby’s London in 1996.