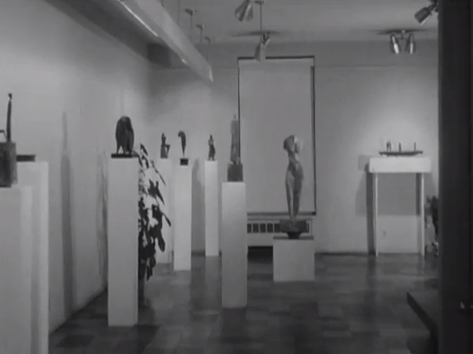 At least nine signed Franz Klines that have traded over the past five years at major auction houses — including Christie’s London and New York; Koller, in Zurich; and Tajan, in Paris — may be fakes. All are untitled ink-on-paper works from the early 1950s, and all have identical block-letter Kline signatures. On the reverse of each is a label from the Grace Borgenicht Gallery, at 1018 Madison Avenue, in New York.

That provenance is suspect, according to William Mac Chambers, a New York private dealer who was a Borgenicht employee for 23 years. “The label is not our label,” he states. “It’s a fake label.” Chambers will not provide a facsimile of the genuine article, explaining that that would make further forgeries easier. He notes, however, that the size and typeface of the ones on the Klines are incorrect. In any case, a former colleague of his recently examined the gallery’s sold-works archive and no Klines were recorded during its existence, from 1951 to 1995 (Grace Borgenicht died in 2001).

Chambers, who has alerted several auction houses when Klines bearing the Borgenicht label have come up for sale, says he found out about the putative counterfeits by chance several years ago when the New York dealer Mary-Anne Martin called him about four such works that had been brought to the gallery for possible consignment. After he cast doubt on the labels, Martin turned down the deal. “I remember those,” confirms Martin. “They came from Italy, and there was a batch of them.”

The priciest of the disputed Klines, Untitled (1953), brought £82,850 ($165,000) at Christie’s London in July 2008. (The artist’s works on paper with other provenances have fetched as much as $665,000 at auction.) In 2004 two others went for more than $100,000 each in separate sales at Christie’s New York. “Christie’s upholds the highest standards when establishing the authenticity of the works that we sell and to date has not received any concerns questioning the provenance of any of these works,” says a spokesperson for the firm. “We are investigating the matter further.”

Last November, a Kline with the Borgenicht provenance was withdrawn by the seller at the 11th hour from a sale at Vienna’s Dorotheum. Another of the suspect Klines sold in October 2007 for approximately $5,000 at the Cobbs Auctioneers, in Peterborough, New Hampshire. The buyer was the Massachusetts private dealer John Raimondi. He subsequently consigned the drawing to New York’s L & M Arts, where, aggressively priced at $250,000, it found no buyer. He then consigned it to the Chicago auctioneer Leslie Hindman, which made the work the cover lot of its December 2008 sale. Estimated at $50,000 to $70,000, the drawing again failed to sell. “Nobody questioned the authenticity,” says Hindman.

The Kline is now back on Raimondi’s wall. “I still think it’s great,” he says, though he does recall that he was initially dubious of the its authenticity because Cobbs is better known for antiques than for postwar art. But the firm’s owner assured him that the work was from a reputable collector.

Two more of the suspect Klines have appeared at Cobbs since Raimondi’s acquisition, including one that was hammered down at $25,000 in July 2009 and another that sold for $28,750 in October 2009. The July buyer returned the drawing to the house on the advice of the New York dealer Armand Bartos, who had seen another Kline with the same provenance in the booth of an American dealer at Art Basel in 2007 and found the label unconvincing. Cobbs took the piece back but resold it to a buyer whom CFO Dudley Cobb characterizes as “one of the major New York art dealers,” who had missed it at the July sale.

“The first buyer said he didn’t want to put it in his collection with that label on it,” says Cobb. “If we thought something was signed Kline and was bogus, we wouldn’t handle it.”

“The trade in Kline forgeries is extensive, and there have been a lot of Klines offered by major auction houses that are extremely questionable,” says the Kline scholar and author Stephen Foster, who while declining to comment on any of the Borgenicht-labeled works, adds, “To tell a person who spent $100,000 on a work that it’s worthless is pretty harsh.”

It may seem strange that so much doubt is possible about the oeuvre of so well-known an artist. But, remarkably for someone of Kline’s stature, he has no catalogue raisonné and his estate is not active. This leaves the field vulnerable to disreputable dealing. “There are a lot of troubled Klines in the market, and nobody knows where they’re from. It’s a buyer-beware situation,” says New York dealer David McKee, who represented the Kline estate in the ’70s and for years, together with the late New York dealer Allan Stone, informally vetted the artist’s works for Christie’s and Sotheby’s.

“What we are left with now is opinions, because there’s no constituted entity that can write certificates for Kline,” says Foster. “I hope that changes in the future.