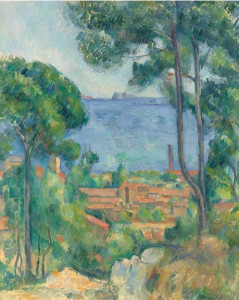 LONDON — The seemingly unstoppable strength of the global art market continued its serial buying surge at Christie’s Impressionist/Modern and Art of the Surreal evening sale, tallying £147,031,000/$222,751,965. Only 10 of the 80 lots offered failed to find buyers for a slender and impressive buy-in rate by lot of 12 percent.

The tally easily hurdled the £92.8-133.8/$140.6-202.7 million pre-sale estimate, thanks to a surprising number of super-charged performing lots crossing a broad spectrum of art epochs. Estimates do not reflect buyer premium fees tacked on to the final hammer price and calculated at 25 percent up to £50,000, 20 percent for anything above £50,000, and up to a million pounds and 12 percent for anything beyond that. For the moment, Christie’s buyer premium charges are slightly lower than Sotheby’s recent increase, though that probably won’t last long.

Thirty-six works of the 70 that sold made over a million pounds and 45 sold for over a million dollars. Of those, two made over £10 million and five made over $10 million. One artist record was set for a German Expressionist work.

All eyes in the King Street salesroom were glued on the evening’s cover lot (lot 8), Paul Cezanne’s masterful and jewel like composition, “Vue sure L’Estaque et le Chateau d’If” from circa 1883-85, acquired in 1936 by Samuel Courtauld of the eponymous gallery fame and one of Britain’s greatest French Impressionist art collectors. The vertical format picture depicting the 16th-century fortress across the bay in the gorgeous distance had been on long-term loan to the Fitzwilliam Museum in Cambridge from 1985 through 2014. It sold to New York private dealer Nancy Whyte for £13,522,500/$20,486,588 (est. £8-12 million). International dealer David Nahmad was the underbidder.

Back in the high-value arena, (lot 15) Amedeo Modigliani’s pensive double-portrait, “Les deux filles” from 1918, painted in the south of France after the artist and his pregnant mistress fled war-torn Paris, sold to another telephone bidder for £7,586500/$11,493,548 (est. £6-8 million). It last sold at Christie’s London in February 2009 for £6,537,250 and this round was packaged as part of a private European collection dubbed by Christie’s “Reality & Surreality — A 20th Century Dialogue.” It remains unclear whether the laborious heading spurred bidding.

A second Giacometti bronze from a different collection, (lot 14) “Diego au chandail,” a 19 ¼-inch high lifetime cast from 1954 and featuring the artist’s brother and close collaborator, sold for £2,490,500/$3,773,108 (est. £2-3 million). The title refers to Diego’s bulky jumper, a practical accessory for warding off the winter chill of the artist’s studio.

“It had a very low estimate,” said Malingue as he departed the salesroom, “and my client was very happy to buy it.”

That seemed to be the evening’s theme — happy buyers consuming in a carefully prepared market.

The sale also included a number of German Expressionist works from the storied collection of the late Carl Hagemann, an enterprising chemist whose collection of officially proclaimed Degenerate Art was hidden from the Nazis at the Stadel Museum during World War II and emerged unscathed.

“There’s plenty of demand out there for first-rate things,” said Acquavella as he headed down the stairs to the fresh air. “People seem to be looking for some of the older things now, moving to the classic and modern.”

The same provenance accompanied Rene Magritte’s other worldly composition, “Les Compagnons de la peur” from 1942, depicting five owls/plant creatures nestled together on a rocky promontory. The painting sold for £4,114,500/$6,233,468 (est. £2.7-3.5 million). This important and early “leaf-bird” painting had been on loan to the Musee Magritte in Brussels since 2009.

“The Belgians are making Magritte into their saint,” said New York-based Surrealist specialist and private dealer Timothy Baum, as he watched the Magritte prices fly, especially the small-scaled gouaches on paper. Of those, (lot 114) the remarkable seated seer like figure in “Le therapeute” from 1962 sold to New York advisor Abigail Asher of Guggenheim Asher for £,986,500/$3,009,548 (est. £600-900,000). It hailed from the storied Belgian collection of Margaret Krebs and has been in a private collection since 1965. Referring to the Magritte gouaches, Asher said, “They’re the most iconic objects, small jewels of the 20th century, fresh and in gorgeous condition. It’s what everyone would like to have. “

The evening action resumes in London next Tuesday with Sotheby’s contemporary art sale.