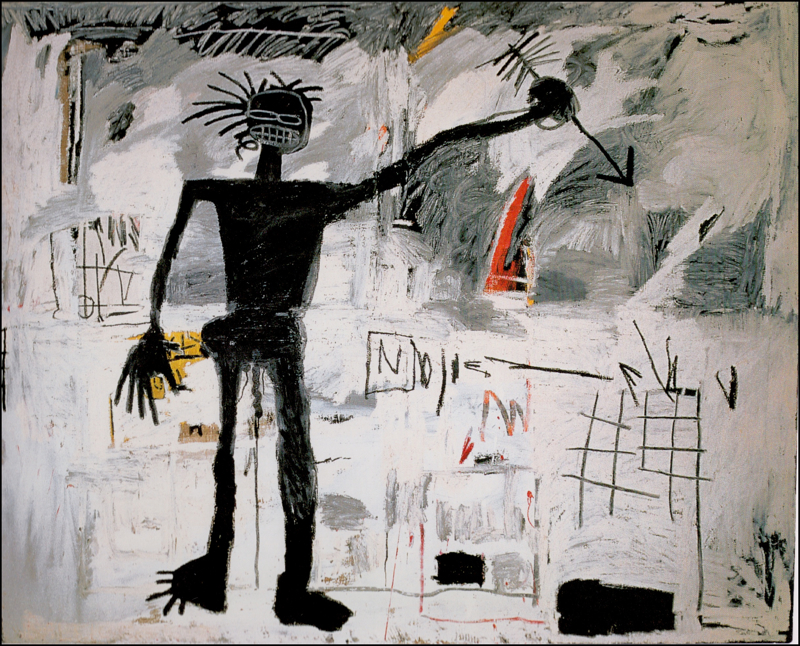 In Christie’s posh salesroom on Park Avenue last week, “Self-Portrait” by Jean-Michel Basquiat, the onetime graffiti artist who died of a drug overdose at the age of 27 in 1988, rocketed to $3.3 million, five times as much as had ever been paid for a Basquiat creation.

The Basquiat sale is only the latest example of the power that flickering fame has in the world of art auctions, where who’s hot is measured by the most exact of all instruments: cold cash.

Basquiat’s hotness is fueled by mixed ingredients. His New York waiflike wildness, good looks, primitivist energies and high Warholian credentials (he and Andy were painting pals) are part of what one buys when one buys his pictures. That he was a celebrity means he also adds flash. They’ve made movies about him. He painted jaggedly, lived jaggedly and died that way as well, and all of this is present in his best paintings.

The huge 1982 painting of a dreadlocked, black stick figure wielding an arrow against a stormy background sold to an anonymous buyer on the telephone. And it brought more than important works by Alexander Calder, Jasper Johns, Robert Rauschenberg and Warhol at Sotheby’s contemporary sale held a few days later.

The Basquiat even brought more than several oil paintings by such modern masters as Claude Monet, Camille Pissarro, Pierre Auguste Renoir and Pablo Picasso that were offered for sale at Sotheby’s impressionist and modern evening sale held Nov. 16.

“It’s a huge price for a great painting,” says Philippe Segalot, the new international head of Christie’s contemporary art department. “This price represents an anticipation of the market.”

“Whoever bought it understood the painting. It’s a major, major work,” says Anina Nosei, the Chelsea dealer who first exhibited Basquiat in New York in the early ’80s. She recalled selling the painting fresh from the artist’s subterranean studio “for under $5,000” to a Swiss collector in 1982. Bruce N. Whitman Jr., senior director of Passion of Art, a Manhattan gallery, lost out in the bidding for “Self-Portrait” when he quit at $2.7 million, and then went on to buy Basquiat’s “Untitled (Chinese Man, Orange)” from 1981 for a bargain basement $200,500.

So far, Christie’s has not divulged the identity of the anonymous phone buyer for the Basquiat, apart from saying the buyer is “a private collector.” Trade rumors have ranged from publishing magnate S.I. Newhouse Jr. to Philip Niarchos, the eldest son of the late Greek shipping tycoon and storied art collector Stavros Niarchos. Asked to explain the enormous gap between “Self-Portrait” and “Untitled (Chinese Man, Orange),” Segalot said, “the second was a good painting which got a normal price and the other one was a masterpiece and had a conservative estimate. This gap will be more and more common since the market is already selective.”

Regardless of any art market intrigue about the true buyer of “Self-Portrait,” no artist at the moment, living or dead, is hotter than Basquiat, except perhaps Vincent van Gogh, whose 1889 “Portrait of the Artist Without Beard” fetched a staggering $71.5 million at Christie’s Thursday, making it the third most expensive work of art to sell at an auction. In fact, a kind of frenzy for Basquiat’s work is in full gear, judging by the staggering $717,500 price realized for an even later untitled work from 1984-85 that sold at Sotheby’s to an anonymous telephone bidder on Tuesday.

The art market, while not a popularity contest, elicits instant judgments. Last June at Christie’s New York “Seascape,” a large-scale, photo-enhanced oil painting by the German superstar Gerhard Richter, sold for a record $2.53 million. This round at Christie’s, another version, “Seascape With Bird,” fizzled at $600,000, failing to find a buyer.

Both paintings carried the identical estimates of $800,000-$1.2 million, but the more recent entry had condition problems. The surface on the lower portion of the painting was visibly crackled as if it were a 300-year-old Old Master. But cracked paint is not always an issue. Sometimes it’s the artist’s reputation, waning or gaining.

At Sotheby’s contemporary sale Tuesday evening, Cy Twombly’s “Untitled” pencil, oil and crayon on canvas abstraction from 1964 sold for $662,500. The last time it appeared at auction, also at Sotheby’s but in November 1989 at the height of the ’80s art boom, the picture fetched $1.7 million. In a decade, the market value of the picture dropped more than half.

Former artist heavyweights, such as the minimalist sculptor Carl Andre, have suffered worse fates under the gladiator-like conditions of auction rooms, in which potential buyers have seconds to make decisions on the value of a work. Last week at Christie’s, for example, New York collector Joel Mallin bought Andre’s huge sculpture of pine blocks, “Sphinges,” for $96,000, a little more than Christie’s expected to get. But another Andre that night, “39th Copper Cardinal,” and two more works offered at Sotheby’s the following week all failed to sell.

So in the contemporary pecking order, Andre is definitely not hot while the fortysomething sculptor Robert Gober sizzles. Gober’s startling installation piece from 1993-94, “Untitled (Man in Drain),” for example, fetched a record $552,500 at the Christie’s sale, going again to collector Mallin. Even when Christie’s star auctioneer Christopher Burge explained to the audience before the auction that another Gober, “Dollhouse” from 1978, was “made as a work of carpentry and not as a work of art,” someone bought the dollhouse for $68,500. 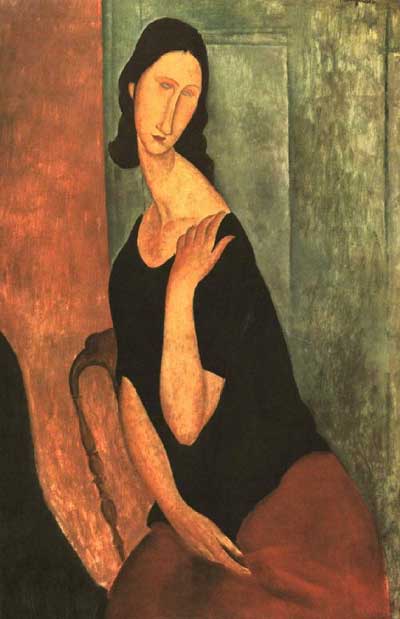 The recent contemporary sales have also jacked up the values of Matthew Barney, Richard Diebenkorn, Martin Puryear, Cindy Sherman and, of course, Andy Warhol, whose market seems to grow as if it were a hot technology stock.

“Warhol’s market is only going to get stronger,” says New York dealer Andrew Fabricant, director of the Richard Gray Gallery. Fabricant bid on Warhol’s “16 Jackies,” which sold for $1.87 million, half a million more than the auction house estimated.

Similar pecking orders can be ordained for members of the impressionist and modern fraternity. At Sotheby’s $86.5 million sale of the Reader’s Digest Collection on Monday, Amedeo Modigliani’s “Jeanne Hebuterne With Hand on Left Shoulder” from 1919 made a record $15.1 million and its stunning pendant portrait “Jeanne Hebuterne, Seated in a Soft Arm Chair” from 1918 made $9.9 million. Both pictures were estimated at $9 million-$12 million. While Modigliani excelled that evening, Edgar Degas’ circa 1878 pastel “Dancers on the Stage,” offered at Sotheby’s that same evening, flopped at $1.7 million, less than the $1.8-$2.2 million it was expected to bring.

In the auction rooms, Modigliani is on the ascendant while Degas is stuck in the fourth position.