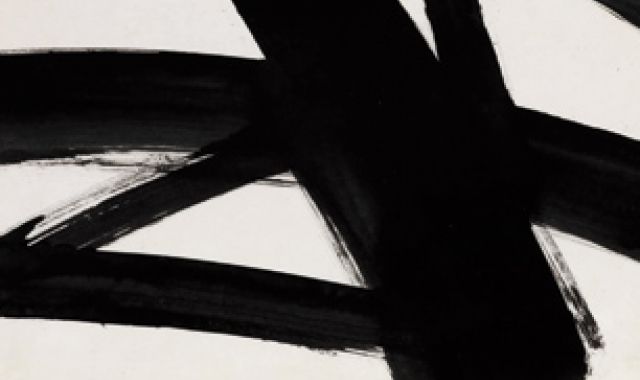 At the 11th hour on Thursday, Swann Galleries withdrew one of its featured lots in today’s contemporary art auction, a 1955 Franz Kline that was estimated at $60-90,000. It was no wonder: the painting has a convoluted history, and is probably a fake.

Signed in pencil on the lower right corner, the 12 5/8-by-16 ¼ inch abstraction — crisply executed in executed in brush and black ink on cream wove paper — caught the attention of New York dealer Armand Bartos who communicated his suspicion aboutthe piece’s authenticity to Swann’s prints and drawings specialist Todd Weyman.

“I have seen four Klines that look very much like this, the same clean look, all signed the same way, as if they were almost toogood for Franz Kline,” said Bartos in a phone interview. “He was a dirtypainter,” the dealer said of Kline’s rough-and-tumble Abstract Expressionist style.”He wasn’t a clean painter.”

Though the double-page gatefold spread for the work in the Swann catalogue — where it is listed as lot #214 — gave no indication of provenance or previous sales history, ARTINFO has learned that the painting last sold for $28,750 in October 2009 at Cobbs Auctioneers in Peterborough, New Hampshire, a regional auction housebetter known for selling needlepoint portraits and 19th-century American art than postwar or contemporary fare.

That Cobbs catalogue entry for the Kline — then lot #30 — is still posted on the firm’s Web site andincludes photographs of the back of the work on paper, clearly showing apaper label with manual typewriter lettering from the now defunct Grace Borgenicht Gallery of New York.

The work withdrawn from today’s sale at Swann had no label on its backside.

In fact, an article about the Kline fakes publishedby Art + Auction earlier this year documented at least nine works that had successfully sold at auction in the past five years as authentic Kline works on paper, at venues ranging from Christie’sLondon to Tajan in Paris — all bearing the Grace Borgenicht label. One at Christie’s fetched $165,000. A former employee at the gallery, however, had examined the labels and pronounced them as fake, strongly casting the works’ authenticity in doubt.

Another wannabe Kline — also untitled, similarly sized, and bearing the bogus gallery label — was withdrawn without any explanation from a Dorothemcontemporary art sale in Vienna last December, where it had been estimated to sell for €40-60,000.The auction’s catalogue entry for the work noted it hailed from a “private collection, Europe.”

As Bartos notes of the Kline removed from the Swann sale, “If it was genuine, its worth would be somewhere between $150-200,000.”

With or without the issue of the label, the Kline at Swann was indeed problematic to the trained eye. “I can say I have serious reservations about this one,” Stephen Foster, a New York dealer who is an authority on Kline’s work, told ARTINFO after viewing the work on Swann’s Web site,

Faced with a fusillade of evidence, Weyman pulled the work from the sale. “That seals it,” he said. “We’re withdrawing the lot.”

This entry was posted in Auctions and tagged fakes, Franz Kline, Swann Galleries. Bookmark the permalink.