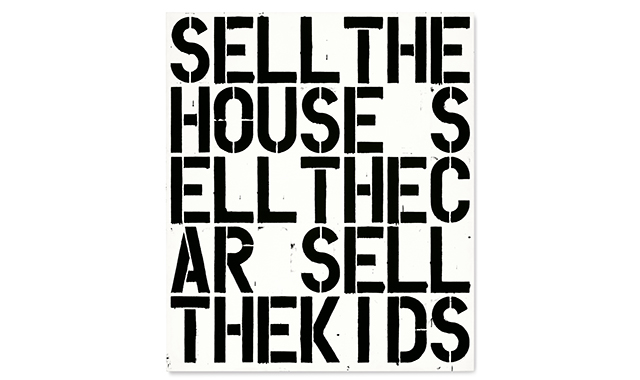 Christopher Wool’s highly anticipated retrospective at the Guggenheim Museum, opening October 25, will be missing what is arguably the artist’s seminal text-based painting: “Apocalypse Now,” from 1998.

The painting’s withdrawal by an anonymous private collector was confirmed yesterday. The large-scale work featuring the iconic run-on, bold-face black type “SELLTHEHOUSE SELLTHECAR SELLTHE KIDS,” in alkyd and flashe on aluminum-and-steel painting, will be hitting the sales floor at Christie’s New York rather than headlining uptown.

The work will be up for sale at Post-War and Contemporary evening auction on November 12, at an estimate of $15-20 million.

First shown at 303 Gallery in 1988 in a collaborative exhibition and installation by Wool and Robert Gober, Wool’s work features words from a famous line in Francis Ford Coppola’s film “Apocalypse Now,” based on the Joseph Conrad novel “Heart of Darkness.” The original show was acquired in its entirety by the late, cutting-edge philanthropic collector Elaine Dannheisser. When it was broken up, Wool’s painting was sold to collector Donald Bryant and then to Francois Pinault, the owner of Christie’s, and finally to former hedge fund manager David Ganek, a supporter and former trustee of the Guggenheim. (It is understood that Ganek made the private deal with Christie’s.)

The museum was able to scramble around this last-minute change, according to two sources, and received an 11th-hour loan of the work-on-paper version of “Apocalypse Now” from collector Peter Brant.

The painting has not previously appeared at auction. “At that price level,” said New York dealer Roland Augustine of Luhring Augustine — Wool’s longtime dealer — “there are buyers for it, for sure.”

The painting will be previewed at Christie’s London from October 13-18. Augustine noted, “it is the seminal work of Christopher’s, absolutely, without a doubt.” And it’s bound to obliterate the current artist record set at Christie’s London, in February 2012, when “Untitled,” a later word painting from 1990 bearing the broken word FOOL, that sold for £4.9 million ($7.7 million).

This entry was posted in Auctions and tagged Christie’s, Christopher Wool. Bookmark the permalink.