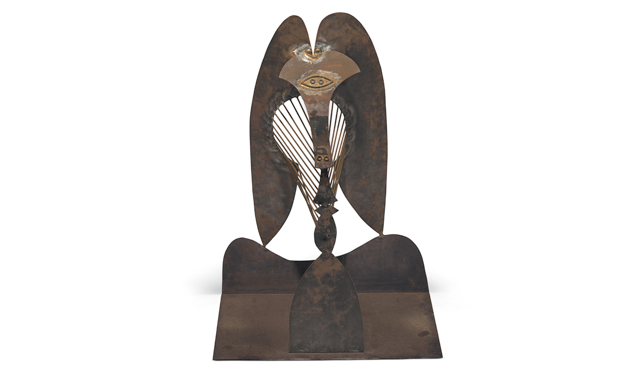 NEW YORK — In a dud of an evening sale and that was especially disappointing in its role as a major fall-season opener, Christie’s single-owner auction from the Jan Krugier collection brought just $92.5 million, far below the pre-sale expectations of $157.8-224.5 million.

Seventeen of the 62 lots offered failed to sell, for a buy-in rate of 27.5 percent by lot and a whopping 46 percent by value.

Krugier who died in 2008 at the age of 82, was a consummate collector and lionized art dealer, best known for dealing in the work of top global artists ranging from Balthus, Picasso and Giacometti to Basquiat and Bacon.

A one-time Polish resistance fighter and a survivor of Auschwitz, Krugier opened his first gallery in Geneva in 1962 and a large branch in New York in 1987.

Perhaps his greatest art-world coup came shortly after Picasso’s death in 1973, when he became the exclusive agent and advisor of the artist’s granddaughter Marina Picasso, and helped her choose inherited works from the estate. With that key role, Krugier became one of the premier Picasso dealers of his era.

Sotheby’s competed fiercely for the Krugier trove but lost out to Christie’s. Though the collection is not guaranteed by either Christie’s or a third party, it is understood the estate will receive a percentage of the buyer’s premium, or what is known in the auction trade as “enhanced hammer.”

Despite that win, the evening fell flat overall, with works that were perceived as too familiar — having appeared at art fairs like Art Basel and the TEFAF in Maastricht during Krugier’s time — and overpriced.

Only two maquettes were made for the 65-foot-high welded steel sculpture that stands in the Civic Center Plaza in downtown Chicago: Krugier’s example, which Picasso kept till his death and Krugier later acquired from Marina Picasso, and one in the collection of the Art Institute of Chicago, a gift of the artist. Picasso made a gift of the final sculpture, turning down a $100,000 fee.

But for all its history and rarity, it was simply too expensively priced, and auctioneer Jussi Pylkkanen was met with stony silence as he gamely tried to elicit bids, before being bough in after a chandelier bid (aka imaginary bid) of $19 million.

A shocked looking Conor Jordan, Christie’s deputy chairman of Impressionist and Modern art, later said “we didn’t see any dissent from our clients at the price levels” leading into tonight’s heavily marketed sale, whose pre-sale presentation included an apartment-like installation of the Krugier highlights at Christie’s by the starchitect Annabelle Selldorf.

Some of the Picasso paintings did make waves, led by the joyous “Claude et Paloma” (1950) in oil and ripolin on panel, which captures the artist’s children at play. It which sold to an anonymous telephone bidder for a whopping $28,165,000 (est. $9-12 million), becoming the top lot of the night.

New York dealer Nancy Whyte was the underbidder, having dropped out after her competition on the telephone pushed the bid from $22.5 to $25 million, apparently in a rush to get the contest over.

Both pictures came from Marina Picasso, and as estate works, neither bears the artist’s signature; he never signed his paintings until they left his studio for the marketplace.

The provenance of Marina Picasso appears as solid or more so than a Picasso signature.

But another major Picasso painting, this one sourced from the auction rooms, the large-scale “Femme dans un rocking-chair” (1956) — depicting Jacqueline Roque, the artist’s last significant lover and muse, seated in Picasso’s favorite Thonet rocker — bought in without a real bid at $5.8 million (est. $8-12 million).

Krugier acquired that work at Christie’s New York in November 1997 for $2.2 million. In fact, of the 62 lots offered, 40 had been acquired by Krugier at auction, a wide range of top-class works from Eugene Delacroix and Paul Cezanne to anonymous African tribal artists.

Of his tribal art holdings, the stunning and strikingly sculptural Ivory Coast “Baule Mask” in wood, once owned by the great French critic and Surrealist champion Andre Breton, before Picasso acquired it, fetched a hefty $1,445,000 (est. $500-$800,000). In this case, too, Nancy Whyte was the underbidder.

During the sale, you could almost conjure up the elegant image of the impeccably tailored Krugier, cane in one hand and cigar in the other, nodding in approval at least at some of the prices.

The number of high-priced lots that failed to sell mounted as the auction wore on, with a Giacometti oil on canvas, “Nu debout” (1958), colored in ghostly gray and depicting a full-length nude image of the artist’s wife Annette, expired at $4.8 million (est. $8-12 million).

The superb provenance of the Kandinsky, once owned by architect Mies van der Rohe, didn’t seem to help, nor did the fact that Krugier bought it at Sotheby’s New York in May 1989 for $3.96 million. Call it sticker shock.

There were various theories about what went wrong at Christie’s.

“A great man, a great eye,” said New York dealer Dominique Levy as she charged out of the salesroom. “But these were not his best pieces.”

“I think it shows you can’t sell things at any price,” said New York private dealer Emmanuel Benador, a former longtime employee Krugier, where he was head of its graphic division. “It was a connoisseur’s sale but unfortunately, people want decorative pieces.”

Taking a somewhat different view, London dealer Ofer Waterman observed, “I think they did ok. A lot of these pieces were at art fairs and familiar, but the good things sold even though at prices below the estimates.”