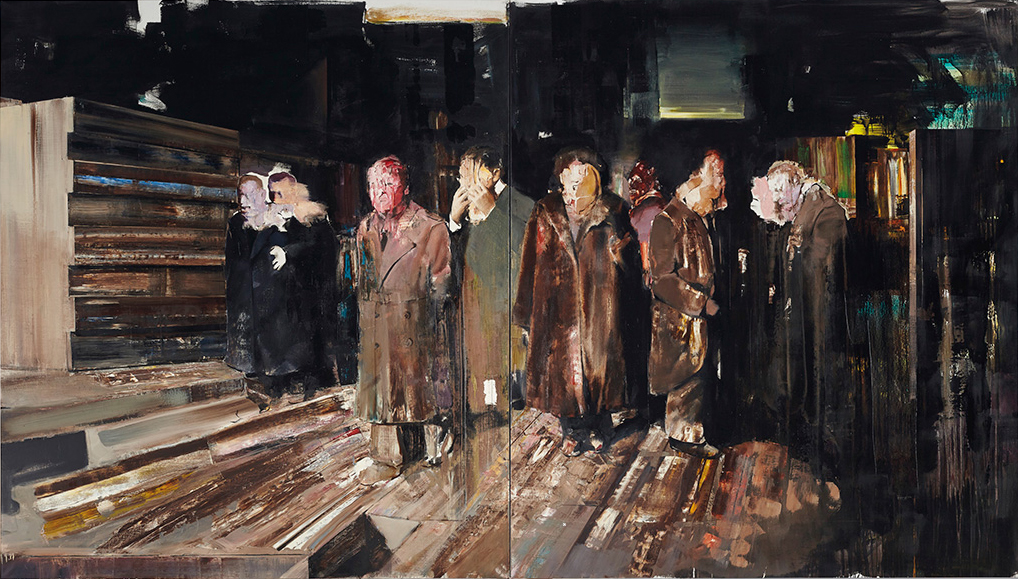 The tally motored past pre-sale expectations of £14.8-21.8 million, thanks to several super-charged lots. Only four of the 41 lots offered failed to sell for a trim fit buy-in rate by lot of 10 percent. The result came close to last October’s £35.5 ($55 million) sale for the 46 lots that sold. Four artist records were set in the first 10 minutes of the sale.

Conversely, the Italian Sale that immediately followed, a combination that Christie’s and Sotheby’s stage during London’s Frieze week, struggled. It brought in a total of £18.6 million ($23.7 million) for the 45 lots that sold. 14 failed to sell for a less convincing buy-in rate by lot of 24 percent. It lagged far behind last October’s £43.3 million ($67 million) result for the 53 lots that sold. The bigger gap in dollars is due to the sinking value of the British Pound post-Brexit.

Estimates do not include the buyer’s premium, calculated for each lot sold at 25 percent of the hammer (final bid) price up to and including £100,000, 20 percent on that part of the hammer price over that and up to £2 million and 12 percent for anything above that amount.

A more menacing composition, Adrian Ghenie’s huge oil and acrylic “Nickelodeon” from 2008, which portrays a thickly impasto’d lineup of eight overcoat-draped male figures standing in a bare, barnlike interior, triggered intense bidding. It finally sold to an anonymous phone bidder for a record-shattering £7,109,000 ($9,028,430) (est. £1-1.5 million). The sale was backed by a third party guarantee, meaning an anonymous backer placed a minimum bid for the work before the auction, assuring its sale, which in hindsight seemed completely absurd. Although Christie’s didn’t identify the buyer, quarter market buzz pointed to the Japanese online retail magnate Yusaku Maezawa, the same person who famously bought Jean-Michel Basquiat’s 1982 “Untitled” painting at Christie’s in May for a record-obliterating $57.3 million. That remains a speculative guess for anyone to challenge.

If there was any question about the uber performance, take note that 22 of the 41 lots that sold in this category met or exceeded the high estimate before the buyer’s premium was applied.

Though Christie’s cleverly banked on some younger and lesser-established artists whose work is hard to get, they also scored with Jean Dubuffet’s classic 1949 composition, “La Vie Agreste (The Rural Life),” whgich also went to Simchowitz —prominently seated and hard to miss at the front of the salesroom — for £2,629,000 ($3,338,830) (est. £1-1.5 million). Reached immediately after the marathon evening, Simchowitz sounded uncharacteristically modest, stating, “I bought a few things. The market is unbelievable — it’s healthy and not hysterical. People aren’t priced out like they were a year ago; it’s in within reach now.”

Rare to market and seemingly outlier works also sparked competition, as evidenced by Gerald Laing’s Benday dot-patterned Pop Art masterwork, “Beach Wear” from 1964, which sold for a record £1,565,000 ($1,987,550). Remarkably, the painting has been in the same private collection since 1965, when the collector acquired it from New York dealer Richard Feigen who — perhaps even more remarkably, is still going strong in New York.

After a short recess, the Italian Sale commenced with less horsepower, though it did have some notable performances, including seven artist records in total. Among them, Gilberto Zorio’s Arte Povera-styled “Untitled” from 1967, a sculpture consisting of asbestos pipe, plaster, and cobalt chloride, brought in £281,000 ($356,870) (est. £70-100,000.)

The evening action resumes on Friday at Sotheby’s, with another double-header Contemporary and Italian Sale.