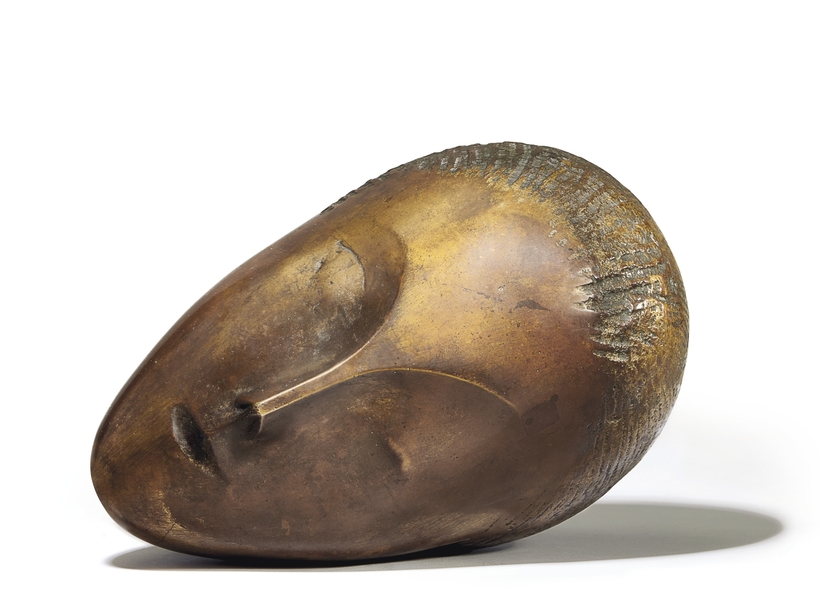 Powered in part by a stunning and rare to market Constantin Brancusi bronze sculpture, Christie’s Impressionist and Modern evening sale opened the New York auction season with a stellar $289,178,500 result.

Twelve of the 55 lots offered failed to sell for a decent buy-in rate by lot of 22 percent.

The result climbed to the upper end of pre-sale expectations pegged at $207-307 million.

It easily hurdled last May’s $141.5 million tally for the 44 lots that sold, representing an impressive 104 percent increase and was the highest mark for an Impressionist & Modern sale for Christie’s since 2010 when an equivalent category evening sale made $335.5 million.

Thirty-four of the 43 lots sold made over one million dollars and of those, five made over $10 million and three made over $30 million.

Estimates do include the buyer’s premium.

One artist record was set.

American and Asian buyers dominated with 42 percent of the lots sold going to America and 23 percent to Asia.

The evening opened with Francis Picabia’s [lot 2] Greek legend themed ‘transparence’ painting, “Xanthe” from circa 1929 that made $907,500 (est. $700-900,000) and well-timed, market wise, given the recent Picabia retrospective at the Museum of Modern Art.

It formerly resided in the collection of Nelson Rockefeller.

Georges Braque’s austere and masterful Cubist composition, “Le Gueridon,” an oil on canvas from 1911 featured in the Museum of Modern Art’s epic “Picasso and Braque Pioneering Cubism” exhibition back in 1990 sparked a bidding war and sold to a telephone bidder for $10,103,500 (est. $4-6 million). It was backed by an anonymous third party guarantee.

New York private dealer Andrea Crane was part of the posse of underbidders.

It was Braque who famously spoke of his experimental alliance with Picasso in Montmartre, “…we were rather like a pair of climbers roped together.”

A suite of six works offered from the Cleveland Clinic [lot 6] and donated by collector/philanthropist Sydell Miller made some hay, as Marc Chagall’s uplifting and romantic “Les trois cierges” from 1939 sold to Cambridge England based art advisor Libby Howie for $14,583,500 (est. $8-12 million).

“It’s a beautiful picture,” said Howie as she exited the salesroom, “it was unvarnished and had an emotional quality to it like some of the early works. I’ve never bought a Chagall before and it’s going to a very good European collection.”

“We were thrilled to have the money going to the Cleveland Clinic” said Asher, who acquired the work for a private client, “and we got an extraordinary picture. It’s a double win for us and we were prepared to go much higher.”

The elegant and complex Picasso depicted his wife, the Russian ballerina Olga Khokhlova and was backed by an anonymous third party guarantee.

Five of the six Cleveland Clinic offerings made $55.7 million against pre-sale expectations of $35-53 million.

Three telephone bidders vied for the work, which was won by an otherwise anonymous Asian client.

The painting carries a fabled back story in that it was looted by the Nazis from the Paris dealer Paul Rosenberg in 1940 and miraculously recovered by the dealer’s son Alexandre Rosenberg, a U.S. Army lieutenant who commanded a unit that recovered 148 crates of stolen art including the Picasso in 1944. The story became a Hollywood movie, “The Train” in 1965, starring Burt Lancaster.

The estate of Pittsburgh uber-collector G. David Thompson sold the painting at Sotheby’s Parke Bernet in New York in 1966 for $52,500.

Greek investor Dimitri Mavrommatis acquired the painting at Christie’s London in June 2011 for £17.9/$29.1 million and took on a third party guarantee for its resale, and realizing a 55 percent increase in seven years.

The Cezanne is listed in the recently launched online Cezanne catalogue raisonne of paintings as No. 107. (www.cezannecatalogue.com).

The Henderson brood made $30.5 million.

Back on the Modern front, Fernand Leger’s brawny and geometric “Nature morte aux elements mecaniques” [lot 18] from 1918, once owned by Alexander Calder and sold over the decades through a succession of blue chip dealers, realized $11,447,500 (est. $10-15 million) and the widely exhibited Bauhaus era Wassily Kandinsky [lot 29], “Oben und links (Above and left)” from 1925, executed in oil on board and bristling with choreographed shapes and symbols, made a sizzling $8,311,500 (est. $5-7 million).

The Kandinsky was backed by a house guarantee.

Among a small group of paintings from the estate of screen legend Greta Garbo, Robert Delaunay’s [lot 27] color banded yet easily recognizable composition, “Femme a l’ombrelle ou La Parisienne” from 1913, sold to another telephone bidder for $3,607,500 (est. $3.5-6 million).

Garbo acquired it from M. Knoedler & Co gallery in 1964, according to the catalogue notes.

Back on the busy Picasso front, another seated woman, [lot 31] “Femme dans un fauteuil,” this time featuring his Spanish wife, Jacqueline Roque from 1956, made $6,407,500 (est. $5-7million.) It was once in the collection of Gary Cooper, another silver screen legend and came to market tonight with a third party guarantee. The work sold to Geneva private dealer Thomas Seydoux.

Of all the entries, the rare, life-time cast, [lot 32] Constantin Brancusi’s patinated bronze with delicate gold leaf, “La muse endormie” from circa 1913 and based on the model and Brancusi friend Baroness Renee-Irana Frachon, won the evening’s beauty contest.

It shattered the previous record for the artist’s work set by the unique marble and stone “Oiseau dans l’espace” from 1922-23 which sold for $27.4 million at Christie’s New York in May 2005.

The work ranks as the sixth most expensive sculpture to sell at auction, only to be exceeded by three Alberto Giacometti works, one Amedeo Modigliani and a Jeff Koons balloon dog.

Nancy Whyte was one of the determined underbidders who placed at least a dozen bids for the prize.

Meyer entered the fray at $34 million and soldiered on, beating back at least four competing bidders.

The original marble was carved in 1909-1910 and resides in the Hirshhorn Museum & Sculpture Garden in Washington, D.C.

The bronze hails from an unnumbered edition of six, all of them different in various ways, under the genius hand of Brancusi.

“They plowed through the sale very well,” said Thomas Seydoux, the private art advisor, referring to Christie’s, his former employer and who underbid Henry Moore’s monumental bronze, “Large Four piece Reclining Figure” [lot 41] from 1972-73 that was parked in front of Christie’s Rockefeller Center entrance and that sold for $8,199,500 (est. $6-8 million).