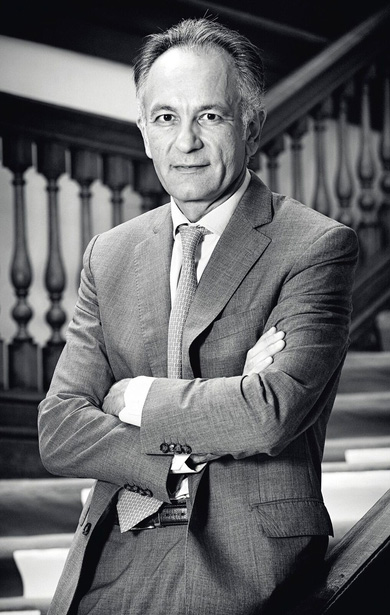 Guillaume Cerutti is the Chief Executive Officer of Christie’s.

As expected, Christie’s released diminished sales figures for 2016 on Thursday, showing that the privately held company had $4.4 billion in auction turnover, down 22 percent when compared to 2015 figures of $6.5 billion.

That overall picture looks bleaker in comparison to 2014, when Christie’s had record auction sales of $6.8 billion, and $1.5 billion in private transactions.

“Last year was more challenging, not on the buyers’ side but on the supply side,” said Guillaume Cerutti, Christie’s freshly installed chief executive, who took over the company reins last month from Patricia Barbizet. “It’s true,” he added, “that last year, probably because of the economic and political context, we found that potential consignors were more cautious and were waiting while the appetite from the buyers and the presence of the buyers were still obvious.”

Cerutti also pointed to a “very good” sell through rate on average by lot across the board of 79 percent, as well as a hefty jump in online sales of 84 percent that totaled $67.1 million over 2015 figures.

Christie’s captured four of the top five auction prices for the year, including the record Claude Monet “Meule (Grainstack)” from 1891 that sold in New York last November for $81,447,500.

In addition, Cerutti, the former CEO of Sotheby’s France, noted an encouraging statistic in the 32 percent of the buyers last year that Christie’s said were new to the house, and of whom around 20 percent came from Asia.

“The art market is evolving so quickly that we have to adapt by being present in new territories and in parts of the world where we feel there’s a potential of new buyers, as was the case when we opened a new office in Beijing last year,” Cerutti said in a phone interview from his London office.”

In that regard, Christie’s also announced on Thursday that is expanding its West Coast footprint, opening a new flagship gallery in Beverly Hills in April.

Asked about 2017 prospects, Cerutti was cautious: “I’ve been in this industry too long to predict anything,” he said. “We are in a very sensitive market.”

Still, he added, “overall, we have all the ingredients to have this year a better start than last year.”

Asked to name the biggest market challenge for Christie’s, Cerutti replied, “without a doubt, last year we tried to demonstrate to our clients on the selling side that the market was still strong and that’s what we’re trying to do as well in the beginning of this year.”

Christie’s arch-rival Sotheby’s, which recently scooped up rainmaking talent from its competitor, won’t release its full figures for 2016 until later in the month, the publicly traded company realized auction sales of $4.1 billion, down 30 percent from 2015, when the figure was $6 billion. Private sale figures weren’t available but will be in a few weeks time.

Sotheby’s realized two of its top auction prices of 2016 ranged with Orazio Gentileschi’s Baroque-era beauty, “Danae,” which sold for a record $30.5 million last January to the J. Paul Getty Museum, and Gerhard Richter’s iconic abstract “A B, Still” from 1986, which made $34 million in November as part of the $131-million Stephen and Ann Ames collection.