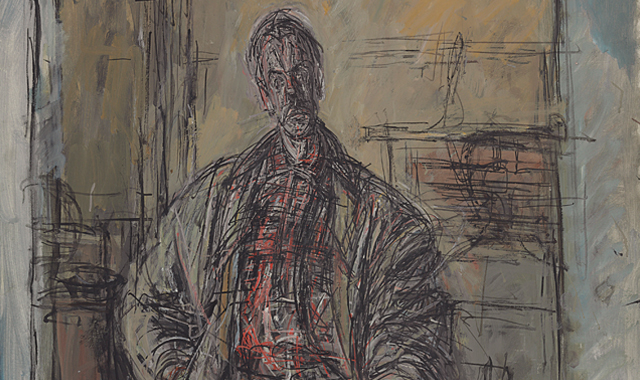 NEW YORK — Thanks to strong Asian telephone bidding, Christie’s recovered a bit of art market traction on Tuesday, raising $144,299,000 in its Impressionist and Modern evening sale after a poor seasonal start the night before.

But echoing Monday evening’s troubles with selling big-ticket items in the Jan Krugier single owner estate sale, the house lagged far behind pre-sale expectations of $188.8-$277.7 million. Eleven of the 46 lots offered went unsold for a decent buy-in rate by lot of 24 percent but a less impressive 35 percent by value, largely due to two pictures with identical estimates of $25-$35 million both tanking.

Twenty-six of the 35 works sold exceeded the million-dollar mark and of those, three brought more than five million dollars.

Works on paper, a rising area of the market, shined, as Henry Moore’s concentrated figure “Woman Knitting” (1949), executed in watercolor, black chalk, colored wax crayon and pencil, sold for a hefty $1,325,000 (est. $500,000-700,000) to an unidentified bidder seated in the front of the salesroom. London dealer Hugh Gibson was the underbidder.

But the strong showing for works on paper came to a momentary stop with Egon Schiele’s entwined nudes, “Mann und Frau (Umarmung)” (1917) in gouache and black crayon, which sold for just $4.8 million (est. $5 million-$7 million). It had last appeared at auction at Christie’s New York in November 2010, when it made a happier $7,362,500.

Pablo Picasso’s, “La femme qui pleure, I” (1937), meanwhile, a relatively large etching, aquatint, drypoint and scraper that is part of his remarkable ‘weeping women’ series, sold to an unidentified Asian telephone bidder for $2,629,000 (est. $1.5-2.5 million). Though a print and therefore far from unique, being number eight of an edition of 15, it brilliantly made the cut as an evening sale entry. New York private dealer Nancy Whyte was the underbidder.

There was also, of course, a range of blue-chip of paintings, including the gaunt and ghostly Amedeo Modigliani portrait “Monsieur Baranowski” (1918) depicting a fellow bohemian artist émigré seated at a table and wearing a forlorn expression. The widely exhibited portrait, formerly in the collection of Sir Robert and Lady Sainsbury, last sold at Sotheby’s London in June 1998 for £4,291,500, but it went unsold on Tuesday at an imaginary bid of $19 million (est. $25 million-35 million).

Another pre-1920s work, Juan Gris’s Cubist constructed composition “Guitare sur une table” (1916), featuring a sensually shaped guitar set against a richly colored pontillist background, and big enough to qualify as a trophy piece, sold to another anonymous telephone bidder for $9,125,000 (est. $10 million-$15 million). It had last sold in the single owner William McCarty Cooper auction at Christie’s New York in May 1992 for $1,485,000.

Bearing an astronomical estimate of $30-50 million, but insured to sell thanks to a so-called third-party guarantee — in which a party outside Christie’s guarantees a minimum price for the work — Alberto Giacometti’s stunning portrait of his brother, “Diego en chemise écossaise” (1954), ended up selling as the top lot on a single bid, for $32,645,000, including fees.

Giacometti paintings are, for the most part, gray and ghost-like, but this rare example features vivid reddish shades rather thickly painted. It came from Jeffrey Loria, the New York private dealer and Miami Marlins’ baseball franchise owner.

For Picasso aficionados, the date of the work is rather significant, coming close to his “Guernica” masterpiece and painted while the artist was juggling affairs with Dora Maar and newbie Marie-Therese Walter.

The artist-model-studio theme was a favorite of Picasso’s in the early 1960’s, according to the catalogue entry, and one instantly recognizes him in the male figure, left thumb stuck in palette, right hand wielding a brush, while the fleshy nude model contorts to show all of her parts.

After the sale, auctioneer and deputy chairman senior specialist Andreas Rumbler said the consigner was happy to put the picture back on his wall, adding, “and who knows — it may come back to the market in a few years.”

There were several standouts on the sculpture front, including Henry Moore’s masterful outdoor-scaled “Reclining Figure” (circa 1970) in cast bronze with a dark brown patina, which sold to another Asian bidder by telephone for $6,101,000 (est. $6 million-$8 million). The Moore was impossible to miss, temporarily parked out in front on the sidewalk of Christie’s Rockefeller Center headquarters.

There was even a burst of auction fever as Wassily Kandinsky’s geometric and color charged composition, “Schwarz und Violett” (1923) ignited a surprise bidding war, finally selling to David Nahmad for $12,597,000 (est. $4.5 million-$7.5 million).

“It was a long battle,” said Simon Capstick-Dale, a London and New York dealer and the underbidder on the uber-performing Kandinsky. “And it’s a great painting, but it was time to let it go.” After starting his quest at $5.5 million he finally dropped out at $11 million, a hundred thousand dollars shy of the winning hammer bid before fees were added.

“There wasn’t a lot of exceptional material,” said New York art advisor Mary Hoeveler as she exited the salesroom, happy to have bought the less expensive Kandinsky, “Scharf im dumpf” (1929) for $1,085,000 (est. $1 million-$1.5 million). “It does feel to me like things are slowing down a bit and collectors are a little bit more sober about the market right now. There’s still plenty of money out there but people are being highly selective. Material has to be exceptional and properly estimated.”

The evening actions for Impressionist and Modern art resume for the finale at Sotheby’s on Wednesday.