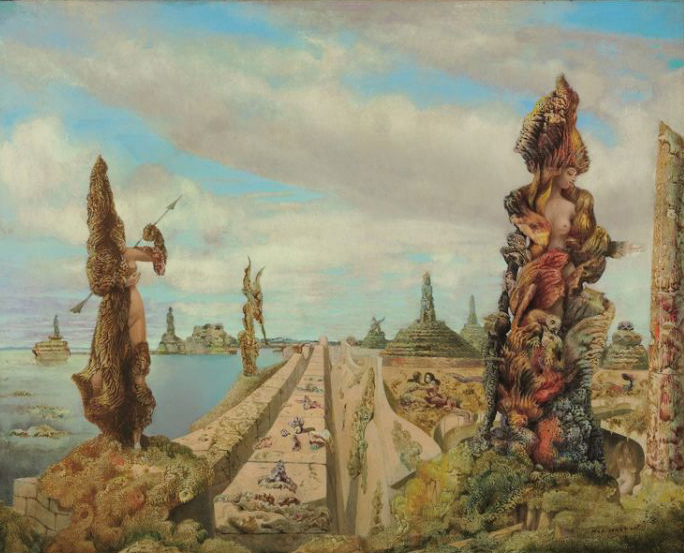 Twenty-two of those 89 lots failed to sell, for a fair-to-middling buy-in rate by lot of 25 percent.

Twenty-seven works sold for over a million pounds and of those, six exceeded £5 million; 34 lots sold for more than one million dollars and nine made over $5 million.

It was quickly apparent that deliberately low estimates were opening wallets in the room.

Though the artist is rarely seen in evening sales territory, a stunning and incredibly detailed George Scholz painting in the Neue Sachlichkeit style, “Badische Kleinstadt bei Tage” from 1922-23, showing an aerial view of a busy village, sold to New York’s Acquavella Galleries for £1,202,500/$1,730.398 (est. £300-500,000).

German works were in high demand as Ernst Ludwig Kirchner’s power-packed “Bahnhof Konigstein” from 1916, a city scene in oil on canvas hailing from the collection of chemist/collector extraordinaire Carl Hagemann, sold to a telephone bidder for £2,434,500/$3,503,246 (est. £1.5-2 million).

Results like that seemed to erase concerns in the room that this Impressionist/Modern side of the market might be sliding downwards in a correction. It is clearly still churning away, at least when attractive property is offered.

“I bought the Chagall for a private European collector,” said Seydoux in a phone interview after the sale. “We’re very happy and we thought that was a good picture for that price.”

Reflecting on the evening, Seydoux, the former European head of Christie’s Impressionist and Modern departments, noted, “I thought it was a typical, old-fashioned February sale, like the kind of sale you saw a couple of years ago. Overall, the market is still there but it isn’t really a sexy season.”

Other highlights included a second Egon Schiele, “Selbstbildnis mit gespreizten Fingern” from 1909, executed in oil and metallic paint on canvas and featuring the artist’s famously elongated fingers, which sold to a telephone bidder for £7,250,500/$10,433,470 (est. £6-8 million). It had last sold at auction at Christie’s London in February 2007, arguably at the height of that era’s art market, for £4.5 million.

The long sale was divided into two parts, with the latter, focusing on “Art of the Surreal,” seeming softer in parts due to relatively lower quality and some rehashed material. It racked up ten of the 22 unsold lots in the evening.

Even though it suffered in comparison to its last outing — when it fetched a super-charged $16,322,500 at Christie’s New York in November 2011 — the evening’s standout and top lot was Max Ernst’s extraordinary “The Stolen Mirror” from 1941, featuring references to the Statue of Liberty and Ernst’s narrow escape from Nazi occupied Europe. It sold to telephone bidder for £7,642,500/$10,997,558 (est. £7-10 million). Luckily for the seller, the picture was backed by a Christie’s/Third Party guarantee and it seemingly sold on a single bid.

It was the evening’s big thud.

Another Surrealist offering, though dated way past that movement’s prime, Joan Miro’s “Femme et oiseaux dans la nuit” from 1968, brashly colored in blue, red, yellow and green, sold to dealer David Nahmad after a spirited bidding battle for £5,794,500/$8,38,286 (est. £3-5 million). It was a strong result against the estimate, but it barely exceeded the £5,193,250 result it made at Christie’s London in June 2010, affirming, it would seem, that this was a premature re-entry to the auction market.

One of the evening’s wildest looking entries was Salvador Dali’s “Le voyage fantastique” from 1965, a large-scale gouache and watercolor on paper mounted on board that was commissioned for the 1966 film “Fantastic Voyage,” and that looked more like a Sigmar Polke concoction than anything else (despite the closeup of Raquel Welch’s face). It brought £1,426,500/$2,052,734 (est. £1.2-1.8 million).

“The sale was pretty in line with what I expected, really,” said Jay Vincze, the head of Impressionist and Modern art at Christie’s London. “There was strong bidding at all levels and in all periods. I think we gave the market a pretty encouraging and assuring sale this evening.”