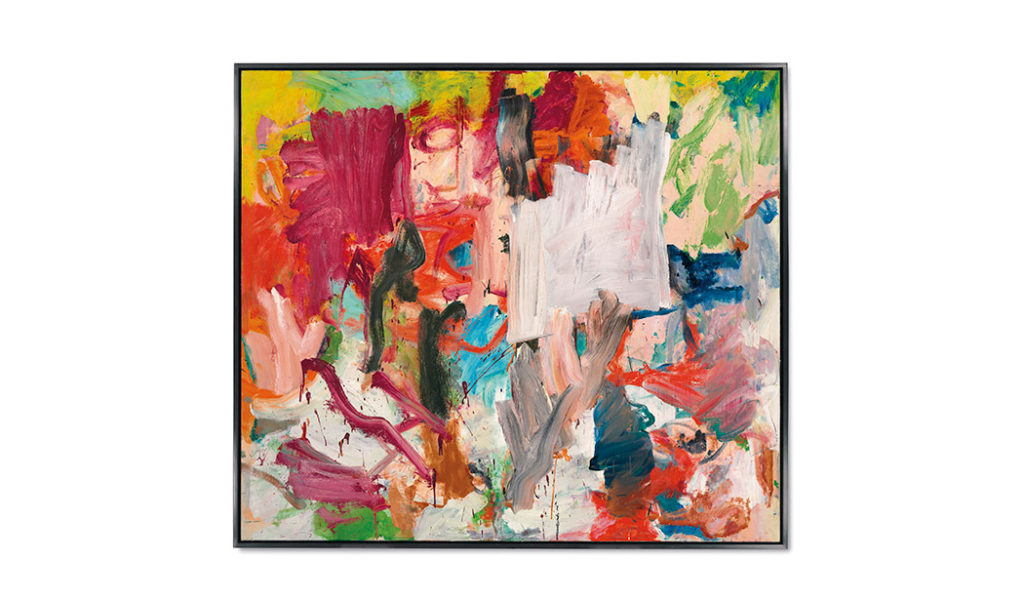 Powered by a record-shattering Willem de Kooning painting that sold for more that $66 million, Christie’s racked up an impressive $276,972,500 in a market-stabilizing Post-War and Contemporary art auction on Tuesday night.

Only seven of the 61 lots offered went unsold, making for a crisp 11 percent buy-in rate by lot.

The tally surged towards the upper end of pre-sale expectations, which ranged from $216.6 to 306.6 million.

Forty-three of the 54 lots that sold made over a million dollars and of those, five exceeded $10 million. Five artist records were set.

The evening got off to a historical start with Jonathan Horowitz’s “Obama ’08,” a wall sized installation of 43 digital chromogenic prints of all the American presidents, from George Washington to Barack Obama, mounted in individual artist frames. The group sold for a record $223,500 (est. $100,000-150,000).

Ghenie, at 40, has become a darling of the secondary market, as evidenced last month at Christie’s London when his “Nickelodeon” from 2008 sold for a record £7.1/$8.9 million.

The price points continued to climb with Christopher Wool’s brawny, black on white word painting “Untitled” from 1990, executed in enamel on paper, which sold to a telephone bidder for $3,127,500 (est. $2-3 million). New York dealer Stellan Holm was the underbidder.

On the increasingly rare-to-market Pop Art front, Andy Warhol’s “Statue of Liberty” from 1986, reprised from a close up photograph of Lady Liberty’s head and transformed in a camouflage pattern, sold to Zurich dealer Doris Ammann for $3,719,500 (est. $3-6 million). The 72-inch-square painting last sold at Phillips, de Pury & Luxembourg New York in May 2002 for $574,000.

An earlier and decidedly iconic work, Warhol’s “Self-Portrait” from 1966, featuring the artist thoughtfully posed with fingers touching his chin against a fire-engine red ground, sold to New York private dealer Neal Meltzer for $6,519,500 (est. $4-6 million). The self-portrait last sold at Sotheby’s New York in May 2002 for $1,769,000.

But Lichtenstein’s “Double Mirror,” an optically dizzying oil and Magna on two stretched canvases from 1970, bought in at $1.5 million (est. $2.2-2.8 million), as did “Reverie/Color Separation Drawing” from 1965, comprised of tempera, felt-tip pen, printed paper and paper collage, which tanked at $3.2 million (est. $4-6 million).

“Double Mirror” was backed in full by a Christie’s guarantee, so the house, in effect, took ownership of the spurned painting.

Doig made headlines earlier this year after he was sued in Chicago by a former corrections officer for denying that he was the artist “Pete Doige,” the maker of a juvenile desert landscape painting that the owner wanted to sell. The judge ultimately ruled in Doig’s favor.

Of the outlier star lot offerings, Willem de Kooning’s masterful and luscious abstraction “Untitled XXV” from 1977, royally scaled at 77 by 88 inches, set off an epic bidding battle, finally selling to the telephone for a record-shattering and phenomenal $66,327,500 (unpublished estimate in excess of $40 million).

Another version, “Untitled VII” from 1977, hit a record $32 million at Christie’s New York in November 2013, in an earlier sign of how rare and in-demand these stellar abstractions have become. Remarkably, Tuesday night’s painting more than doubled that record.

“It’s always fun to have a passionate collector who loves to buy,” said Brett Gorvy, Christie’s world-wide chairman of Post-War and Contemporary art and who took the winning de Kooning bid.

The only rival to the magnificent de Kooning and the big Richter for top billing was Jean Dubuffet’s extraordinary and joyous street scape, “Les Grandes Arteres” from 1961, comprised of Parisian shop fronts, a promenade of all sorts of ambling characters and a parade of American and French cars, complete with etched license plate numbers. It sold to an anonymous telephone bidder for $23,767,500 (est. $15-20 million) and came backed with a third party guarantee. The seller acquired the painting from the Cordier & Ekstrom Gallery in 1964.

Other important lots included Jean-Michel Basquiat’s fierce “Untitled” from 1982, executed in acrylic and enamel on blanket and mounted on a tied wood support with twine. The painting, of a halo-headed figure, also carried a third party backing and sold to a telephone bidder for $5,847,500 (est. $5-7 million). It last sold at Christie’s Paris in December 2010 for €1,465,000.

You can still see her retrospective at the Guggenheim Museum (through January 11) and check how it compares to rest of the oeuvre.

There were pockets of strength percolating throughout the long evening, as evidenced by a small group of Italian works from the collection of Chiara and Francesco Carraro, led by Alberto Burri’s scorched and melted “Rosso Combustione Plastica” from 1957, which sold for $4,951,500 (est. $3-4 million), and a sublime Alighiero Boetti “Mappa” from 1990, executed in embroidery on linen, which sold to New York/L.A. advisors Guggenheim Asher for $2,167,500 (est. $800,000-1.2 million).

“We were thrilled to get it at that price level,” said partner Abigail Asher, “and were prepared to go much higher.”

What is the take-away from tonight’s strong yet at times beleaguered sale?

“I have one thing to say,” said New York private dealer Alberto Mugrabi who bought Damien Hirst’s “Do You Know What I like About You?,” an 84-square-inch Butterfly painting from 1994, which made $1,039,500 (est. $900,000-1.2 million). “Great pictures sold for great prices. These are the things we have to focus on. Look at the de Kooning — that tells you where the market is.”

The auction action resumes on Wednesday with a double-header of evening sales, Phillips’ 20th Century and Contemporary Art and Christie’s Impressionist and Modern.