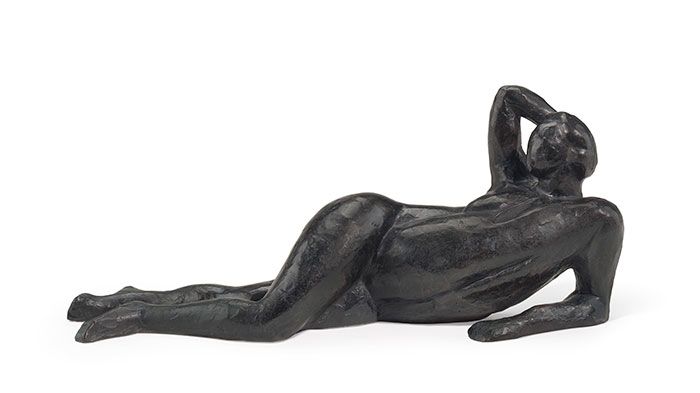 The Impressionist and Modern market continued to show signs of weakness on Thursday night, with a Christie’s evening sale tally of $141,532,000 — just above the low end of pre-sale expectations of $134.3 to 197.4 million.

Perhaps the lackluster result was partly a product of market fatigue, after a gauntlet of sales that began on Sunday, but one couldn’t help notice the empty seats in Christie’s Rockefeller Center salesroom. Compared to the buoyant atmosphere at Sotheby’s contemporary evening sale the night before, the mood was sleepy.

But other indicators were more positive, as seven of the 51 lots offered failed to sell for a crisp buy-in rate by lot of 14 percent. The total came very close to the $144.5 million made by Sotheby’s Impressionist and Modern sale on Monday evening, but with fewer casualties.

Thirty-four of the 44 lots that sold made over a million dollars, and of those, seven exceeded $5 million. One artist record was set.

Still, Thursday’s auction at Christie’s lagged behind its May 2015 equivalent, which brought $202.6 million for 40 lots sold, and which was led by Piet Mondrian’s “Composition No. III,” a 1929 work that fetched $50.5 million. On Thursday, the top price for a single lot was $27 million.

Only one of the works carried a third-party financial guarantee, so the results were about as transparent as one can hope for given the current state of the auction world.

That second Moore was part of a group of works from the Philadelphia based Pincus Collection, as was Barbara Hepworth’s widely exhibited 23 ¼ inch high “Sculpture with Colour (Eos)” from 1946, carved and painted in hopton wood stone with grey and blue paint, which soared to $5,429,000 thanks to the four bidders who chased it (est. $1.2-1.8 million). Gerry and David Pincus had bought the Hepworth from the Martha Jackson Gallery in New York in 1962.

All three of these works appeared to sell to Asian telephone buyers — the two Moores to the same one — judging by the client service specialists and experts who manned the phones.

The portrait is thought to be likeness of Modigliani’s sister, who adopted the artist’s daughter after his death in 1920 and the subsequent suicide of his pregnant wife, Jeanne Hébuterne. It had last sold at Sotheby’s New York in May 2000 for $3,195,750.

“We thought it would sell in the $15 million range,” said Altman as he exited the salesroom.

“I’m so excited,” Altman said. “I just think it’s a marvelous modern masterpiece and you can hang it in a contemporary collection.”

World-class provenance didn’t seem to be much help in driving interest for the cover lot, Claude Monet’s “Au Petit-Gennevilliers” from 1874, an Impressionist jewel suffused with the shimmering light and water reflections of a passing flotilla of sailboats. It sold on what appeared to be a single bid for $11,365,000 (est. $12-18 million). The hammer price before fees was $10 million, two million dollars shy of the low estimate. Obviously, the seller was convinced to accept a lower reserve.

The painting hails from the family of H.O. Havemeyer, a giant name among early American collectors of French Impressionism, who acquired the work in 1901 from a Paris gallery. The family eventually owned thirty paintings by Monet, accumulated in annual trips to Paris led by the American expatriate painter Mary Cassatt, who was close friends with H.O.’s wife Louisine, a passionate collector and early feminist active in the Suffragette movement.

The Monet had originally belonged to the even more famed French collector Victor Chocquet, an early champion of Impressionism and later Paul Cézanne.

A radically more modern late Monet from 1919 (and from a different consignor), “Le basin aux nymphéas,” sold in the room on a single bid to Glenn Fuller of London’s Gladwell & Patterson for the top lot price of $27,045,000 (est. $25-35 million). In its 39-by-41-inch square format, it bore little likeness to the 1874 scene of the Seine, and in fact looked as if it had been painted by a different artist.

The painting — one of some 60 made between 1914 and 1918 that depict the fantastic water garden that Monet tended for years and that served as his outdoor atelier — featured a gorgeous play of light and mirror-like reflections of the landscape. But it was a somewhat dark example, and rather skimpy in the number of flowers it showed floating on the majestic pond—factors that may have led to the single bid interest.

It had first been exhibited in Paris at the artist’s dealer, Durand-Ruel, in 1928, two years after the Monet’s death and perhaps most importantly, signed and dated by the artist.

After a rough go at Sotheby’s on Monday evening, when four of the eight Pablo Picasso works failed to sell, the atmosphere changed for the better on Thursday, with all nine at Christie’s selling, including “Homme assis” from 1969, a late and richly colored Mousqetaire swordsman outfitted in a yellow doublet, which sold to international dealer David Nahmad for $8,005,000 (est. $8-12 million).

Georges Braque’s large-scale interior, “Mandoline à la partition (Le Banjo)” from 1941, featuring some of the artist’s favorite still life elements, triggered a bidding battle among five contenders, and sold to a telephone bidder for $10,245,000 (est. $7-9 million). Dealers David Nahmad and Ben Frija were among of the posse of underbidders.

Two other Margrittes failed to find buyers, including “Les profondeurs du plaisir/The Depths of Pleasure” from 1947, featuring a partially draped nude woman seen from the back and drinking from a water glass as she looks out at a crescent moon. It flopped at a chandelier bid of $3.5 million (est. $4.5-6.5 million).

The estimate was clearly too steep for this sparse crowd of sophisticated collectors and international dealers and advisors.

Though usually offered in auctions dedicated to Latin American art — where she is always a star — Frida Kahlo was represented here as a Modernist with the exotic and lush page-sized “Dos desnudos en el bosque (La tierra misma)/Two Nudes in a Forest” from 1939. A work in oil on metal, it sold to a telephone bidder on a single bid for a record-breaking $8,005,000 (est. $8-12 million).

In the painting, one of the nudes, a pale-skinned figure, reclines against the stomach of her darker-skinned, seated companion, who clasps her hand against a lock of the reclining figure’s hair. It is set against a dense and tropical jungle of sorts, with a wide-eyed monkey staring at the women.

It had last sold to New York Latin American art dealer Mary-Anne Martin at Christie’s New York in November 1989 for $506,000 and subsequently changed hands to a private buyer, who consigned the painting to Christie’s.

It now ranks as the most expensive work by any Latin American artist, including Kahlo’s famed and larger-than-life husband, Diego Rivera. It shattered the mark set by Kahlo’s “Roots” from 1943, which sold at Sotheby’s New York in May 2006 for $5,616,000.

“It wasn’t a bad sale,” said New York dealer David Benrimon, assessing the auction as a whole as he exited the salesroom. “I thought it would be much worse.” He credited the better-than-he-expected results with 11th-hour lowering of reserves.

“I snatched it!,” crowed the dealer.

Overall, “it wasn’t a bad sale,” Benrimon said, assessing the auction as a whole as he exited the salesroom. “I thought it would be much worse.” He credited the better-than-he-expected results with 11th-hour lowering of reserves.

And London private dealer Hugo Nathan of Beaumont Nathan opined that “it’s a buyer’s market.” Nathan acquired a Sam Francis painting from 1953 for $1.6 million hammer at Christie’s Post-War/Contemporary Art evening sale on Tuesday. “It’s very thin over $20 million at auction,” he said. “The Impressionist and Modern market is beginning to feel like Old Masters, and these were weak sales.”

Christie’s mild mannered evening concluded a packed week of six evening sales, including a double-header on Sunday, that cumulatively realized $971 million. With the combined day sale results in the same categories, the tally easily exceeds one billion dollars.

The houses are already scrambling to close their June sales in London in both contemporary and Impressionist and Modern categories.

The market soldiers on.