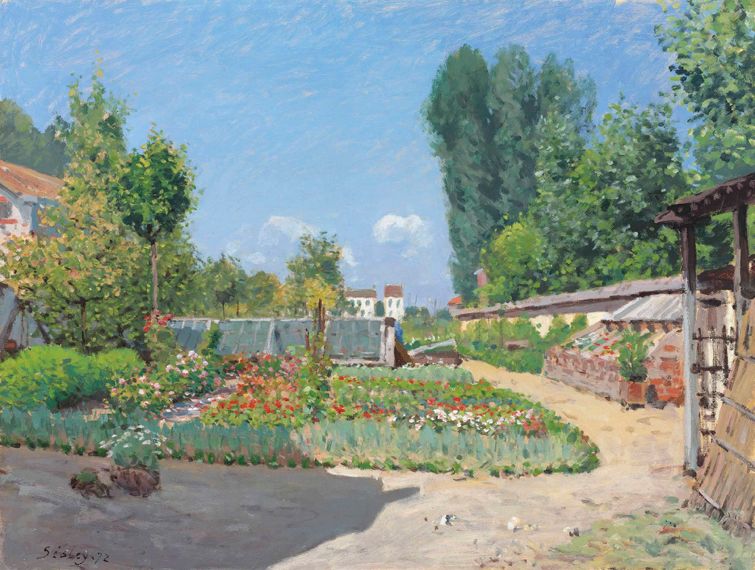 The London auction season opened at Christie’s Impressionist and Modern sale Tuesday evening with solid results, though art market fire works were missing due to a lack of standout offerings. The sale tallied £71,461,000/$112,908,380.

Four Surrealist flavored Rene Magritte gouache on paper offerings, representing a robust slice of his heated market, sold like hot cakes, led by “Le Basier” from circa 1957, depicting a blue bodied dove in flight over a shadowed beach with a crescent moon and stars occupying her extended wingspan — it realized £1,986,500/$3,156,549 (est. £1.2-1.8 million). The work last sold at Christie’s London in February 2010 for £1,217,250, not exactly an inflation fighter.

Of the bare handful of prime, Impressionist era offerings, Alfred Sisley’s beautifully shadowed summer garden, “Le Potager” from 1872, originally acquired by Galerie Durand-Ruel in Paris in 1890 and later exhibited as part of a Sisley solo at its New York outpost in 1914, sold to London dealer James Roundell of Dickinson Gallery for £2,210,500/$3,512,485 (est. £1.5-2 million).

A charming domestic scene, Camille Pissarro’s watchful “La servant assise dans le jardin d’Eragny” from 1884, depicting two of the artist’s eight children minded by a nearby nanny, brought £1,762,500/$2,800,613 (est. £1.6-2.2 million). The painting was backed by a third party guarantee and represents a settlement between the seller and the heirs of the previous owner, storied art dealer and French Resistance fighter Rene Gimpel, who perished in a Nazi concentration camp in 1945. It last sold at auction at Christie’s London in June 1990 at the height of that era’s art market bubble, for £1,650,000.

The modest evening offerings were led by the cover lot, Claude Monet’s “Iris mauves” from 1914-17, a grandly scaled (78 7/8 by 39 1/2 inches) vertical format composition stamped (not signed) with the artist’s signature. It sold to a telephone bidder for the top lot price of £10,834,500/$17,216,021 (est. £6-9 million). It is one of some 20 views of irises Monet painted that flanked the banks of his beloved lily pond and was included in the traveling exhibition “Monet’s Years at Giverny: Beyond Impressionism,” which landed at the Metropolitan Museum of Art in 1978. The picture last sold at Christie’s New York in May 1997 for $3,852,500. Telephone bidders from America, Asia, and Russia chased the big painting, according to Christie’s.

Lesser examples by great French painters of the 19th century was evidenced by Paul Gauguin’s slumbering Tahitian picture “Le reve, Moe Moea” from 1892, which sold over estimate for £1,930,500/$3,050,190 (est. £1-1.5 million). That qualitative difference was evident if you saw the ongoing and spectacular Gauguin exhibition at Fondation Beyeler, where an assortment of potential $100 million and beyond masterpieces are on view.

Other Modern highlights included Pablo Picasso’s late and vibrant “Tete” from 1969, showing off the head and shoulders of one of his virile musketeers, which sold to an anonymous telephone bidder for a bargain basement £4,450,500/$7,071,845 (est. £4.8-6.5 million). The Christie’s backed picture made a hammer price of £3.9 million, £900,000 shy of its low estimate. It last sold at Christie’s New York in May 2010 for $6,802,500. When the last bid came in, auctioneer Jussi Pylkkanen, global president of the firm, said, “I’ll take it,” and banged his gavel on the wooden rostrum. Still, it carried an impressive exhibition note, as it was included in the now historic Palais de Papes exhibition in Avignon in 1970, featuring the artist’s paintings from 1969-70.

The evening had one woman artist represented, the Russian avant garde painter Natalia Goncharova as “Voilier,” undated though undisputed in terms of its dynamic authenticity, bought in at £1.3 million (est. £1.5-2 million). The quick-moving sailboat with the artist’s initials N G emblazoned on the main sail last sold at Bonhams London in June 2008 for £1,700,000. This time, there wasn’t enough wind to get it across the finish line.

“It felt like a nice, tidy, tight sale,” said Jay Vincze, head of Christie’s London Impressionist and Modern department, “and we saw a really good range of bidding from lots of different countries.”

The evening action resumes at Sotheby’s London on Wednesday, highlighted by a rare to market painting by Kazimir Malevich, another Russian avant garde master, carrying pre-sale expectations of £20-30 million.