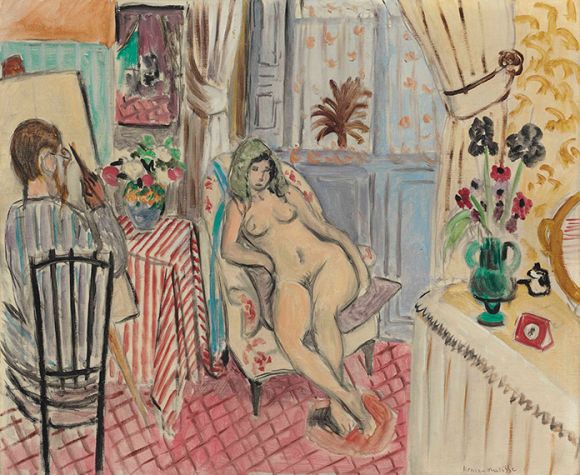 Burdened with what appeared to be too many ambitiously estimated works, Christie’s London major evening sale of Impressionist and Modern art stumbled badly on Tuesday, delivering a disappointing £85,784,000/$146,004,368.

Tonight, one artist record was set and it was a doozy, with a rare and large-scaled Kurt Schwitters (lot 8) “Merzbild” relief painting from 1920, titled “Ja-Was?-Bild,” which sold to an anonymous telephone bidder for the top lot price of £13,970,500/$23,777,791 (est. £4-6 million). Executed in a mixed-media, found object array of oil, paper, corrugate card, cardboard, fabric, wood and nails on board in an artist’s frame, the Dadaist-inspired piece was as fascinating on both its front and back sides, a kind of early Rauschenberg combine, but made in Berlin. It smashed the artist’s previous mark set at Christie’s London in June 2012, when “Merzbild 9 A Bild mit Damestein (L Merzbild L5),” from 1919, made £1,273,250/$2,004,802.

“It shows,” said Jay Vincze, London department head of Impressionist and Modern art, of the record-breaking Schwitters, “that when something that is so unique and so ground breakingly important comes up, people respond in kind.”

It was one of nine works from the storied German collection of Viktor and Marian Langen previously housed at the Langen Foundation in Dusseldorf that made £20,335,000/$34,610,170, easily outstripping pre-sale estimates of £9.6-14.1 million. But that monumental amount of bidding that started off at £3 million and slowly climbed to its final hammer price of £12.4 million (before fees) was a prime example of what the market appetite is for top-class works.

There was a less hearty reception for lesser examples by famous names, even fresh to the market ones, such as (lot 7) Henri Matisse’s Nice period self-portrait, “L’artiste et le modele nu” from 1921, that sold to another telephone bidder for £6,802,500/$11,577,855 (est. £7-10 million). It last sold at auction back in November 1985 at Sotheby’s New York for $1.15 million. Jussi Pylkkanen, the auctioneer and president of Christie’s Europe, egged the audience on with snippets of art historical information about the painting, informing the audience it was once owned by famed American art collector John Quinn, but the pitch didn’t do much.

But trouble brewed moments later when a fresh to market Piet Mondrian painting, “Composition A, with Double Line and Yellow” from 1935 and still encased in the artist’s frame, came up and died at £4.2 million, well shy of its £5-8 million estimate. Even the great James Johnson Sweeney provenance didn’t help achieve the ambitious estimate.

More trouble hit moments later with a group of four works by Alberto Giacometti, including the striking cover lot bronze, “La Main” from a 1947 cast and shown in the artist’s breakout show at the Pierre Matisse Gallery in New York in 1948. It last came up at auction at Sotheby’s New York in May 1985, when it sold for $214,500. Tonight, bidding opened at £7 million and stalled out at an imaginary £9.5 offer off the chandelier, and Pylkkanen murmured “passed,” the auction term for unsold.

Overall, there were nine Giacometti’s offered during the evening, with four failing to sell, evidently too many for the current market taste to absorb. But Vincze, in a post-sale interview, didn’t attribute the cover lot buy-in as a victim of its estimate. “I honestly don’t think it was a question of price. It’s a challenging piece.”

Early Modernist works fared favorably for the most part, as (lot 30) Franz Marc’s dynamic and Fauve like colored “Kinderbild (Katze hinter einem Baum)/Cat Behind a Tree” from 1910-11, a once restituted work and most recently on long-term loan to the Franz Marc Museum in Kochel am See, sold to the telephone for £6,242,500/$10,624735 (est. £5-7 million). The Blue Rider group painting has a mystical air to the composition, executed before the onslaught of World War I.

There were certainly moments of more energetic bidding as a generously scaled (lot 52) Joan Miro painting from 1925, “Painting (The Circus Horse),” dominated by a gold/brown background and formerly in the Rene Gaffe collection, sold to Zurich dealer Mathias Rastorfer of Galerie Gmurzynska. It made £2,994,500/$5,096,639 (est. £1.4-2 million).

“Anything that was fresh and important,” said Rastorfer after the sale, “did extremely well.”

Still, the sale left a flat taste to some observers.

This entry was posted in Auctions and tagged Christie’s, Henri Matisse, Kurt Schwitters, Viktor and Marian Langen. Bookmark the permalink.