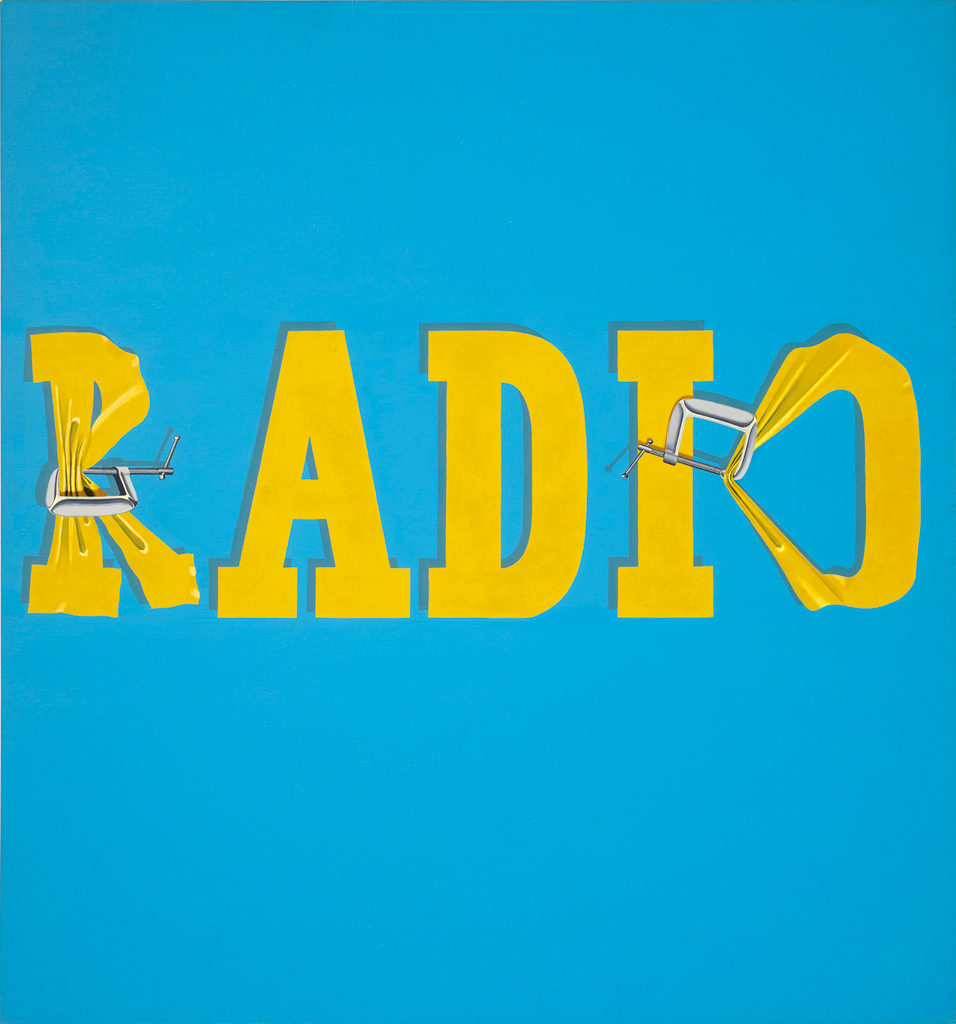 Christie’s postwar and contemporary art evening sale racked up a strong tally of $325.3 million on Wednesday night at Rockefeller Center in New York, thanks in part to some stellar, fresh-to-market property and a rich abundance of pre-arranged financial guarantees. That tally fell comfortably between presale expectations of $267.8 million to $394.3 million. (The total hammer price—the total before buyer’s premium—for the evening was $279.9 million.)

The result trailed by just $32 million last November’s $357.6 million result for a sale that included David Hockney’s Portrait of an Artist (Pools with Two Figures), 1972, which fetched a record $90.3 million.

Only six of the 54 lots offered failed to sell tonight, for a trim buy-in rate by lot of 11 percent. Forty-five of the 48 lots sold for over $1 million dollars, and of those, eight exceeded $10 million, and three made over $20 million. Four artist records were set.

On the financing front, 24 of the 48 lots that sold were backed by third-party guarantees, meaning that, in effect, half of the deals were pre-made.

The action began on a strong note with Rashid Johnson’s close to 8-foot-wide Untitled Anxious Audience (2018), executed in black soap and wax on ceramic tiles and bearing a graffiti rush of three rows of isolated faces. It attracted seven bidders and sold for $879,000 (est. $200,000–$300,000), coming to market the day after Johnson’s latest solo show opened Hauser & Wirth in Chelsea.

The second lot, Dana Schutz’s Shooting on the Air (2016) is an expressionist reprise of the murder of two television reporters near Roanoke, Virginia, in 2016, and brings to mind Andy Warhol’s roster of “Disaster Paintings.” It sold in the room to an unidentified woman for $1.1 million (est. $600,000–$800,000).

Mark Bradford’s monumentally scaled composition Promise Land (2012), comprised of text, paint, and torn paper collage on canvas spanning 8-and-a-½ by 12 feet, sold to a telephone bidder for $7.54 million (est. $6.5 million–$8.5 million). It was backed by a third-party guarantee. If you stand far enough away from the work, the words “Sober Living” pop out in numerous places, a phrase the artist appropriated from a billboard in his Los Angeles neighborhood. 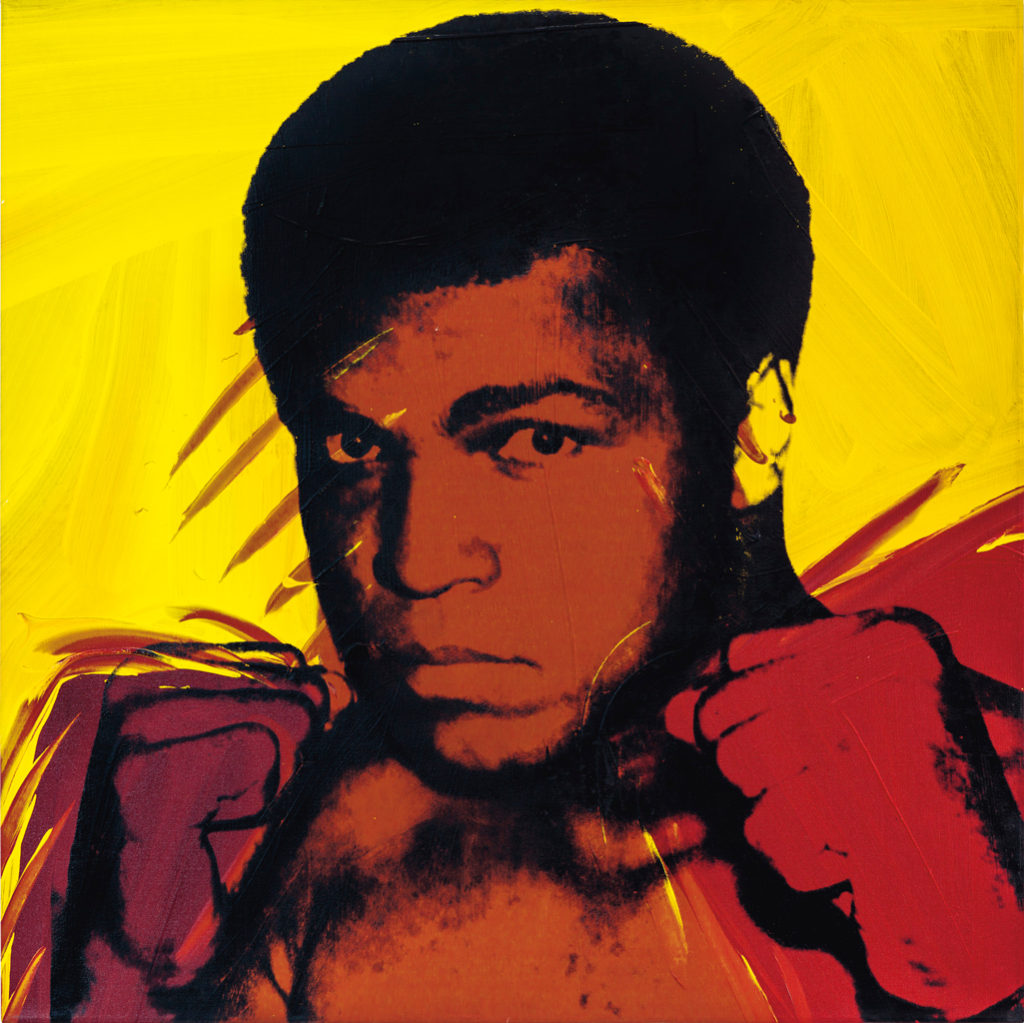 But the crown for the Prince of Pop, at least for tonight, was Ed Ruscha. His extraordinary, rare, and pristine word painting Hurting the Word Radio #2 (1964) sold to an anonymous telephone bidder for a record-shattering $52.5 million (est. $30 million–$40 million).

The competition opened at $22 million and quickly attracted a trio of rapid-fire telephone bidders; at the $46 million mark, auctioneer Jussi Pylkkanen quipped to the packed salesroom, “Who needs an auctioneer?” Marc Porter, chairman of Christie’s Americas, took the winning phone bid.

The lemon-yellow capitalized letters of RADIO dominate the center of the sky-blue canvas, with the letters R and O graphically squished in trompe l’oeil fashion by a pair of metal C-clamps.

The painting was sold by L.A. collectors Joan and Jack Quinn, who acquired it directly from Ruscha in the early 1970s, a half-dozen years or so after it debuted at the storied Ferus Gallery. Two other versions are squirreled away at the Menil Collection in Houston and the Museum Brandhorst in Munich. 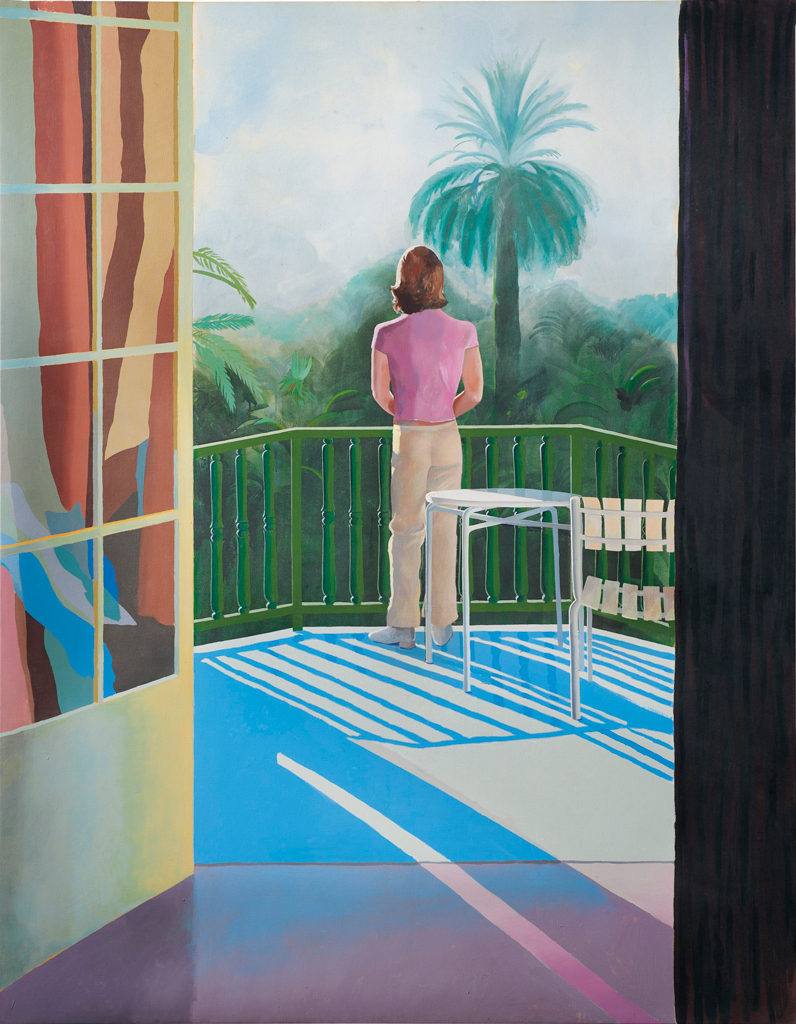 During the public viewing of sale’s offerings at Christie’s New York headquarters, the Ruscha was enshrined in a room where Jeff Koons’s stainless steel Rabbit (1986) was displayed last May before it fetched $91.1 million, the most ever paid at auction for a work by a living artist. For this round, the room was wired for sound, playing rock music from the ‘60s from bands like the Kinks. You get the idea.

The Ruscha shattered the previous high mark for the artist, set by Smash (1963) when it sold for $30.4 million at Christie’s New York in November 2014.

In a very different vein, David Hockney’s stunning and large-scale painting Sur la Terrasse (1971) is more Matisse-like than Pop, depicting a standing man looking out from a shadowed terrace at beautiful surroundings. For the viewer (or voyeur), it’s as if you are in the subject’s hotel bedroom, peering through the open French doors.

In fact, it is an autobiographical work, partially based on photographs; the unseen artist is looking at the back of his young lover and muse Peter Schlesinger during a stay in Marrakesh. The beautiful light and view disguise the disintegration of their relationship.

The painting, never before offered at auction and consigned from a European collection without a guarantee, sold to a telephone bidder for $29.5 million (est. $25 million–$45 million).

As a palette cleanser to the sturm und drang of lost love, Robert Ryman’s 39-inch-square white canvas, Times (2000), instantly induces a trance-like meditation from its seemingly infinite expanse of gestural strokes. It sold to another telephone bidder for $5.72 million (est. $3 million–$4 million).

In related abstract fashion, Cy Twombly’s late, milky mélange of coiled markings, Untitled (2006), in acrylic on canvas, scaled at about 85 by 66 inches, went to another telephone bidder for $9.7 million (est. $10 million–$15 million). It last sold at Sotheby’s New York in May 2014 for $10.2 million, making it another instance of a great work of art being a lousy investment.

By contrast, Ellsworth Kelly’s huge, stunning oil Red Curve VII (1982), the canvas perfectly divided diagonally into separate fields of red and white, went to another telephone bidder for an artist-record $9.81 million (est. $5 million–$7 million). The seller acquired the work in 1983 from the famed-long-ago and now-long-shuttered Blum Helman Gallery.

Seemingly out of place in the American-weighted mix of Pop and abstract art, Francis Bacon’s 14-by-12 inch Study for Self-Portrait (1979) sold to Bona Montagu of New York/London’s Skarstedt Gallery for $9.01 million (est. $8 million–$12 million). 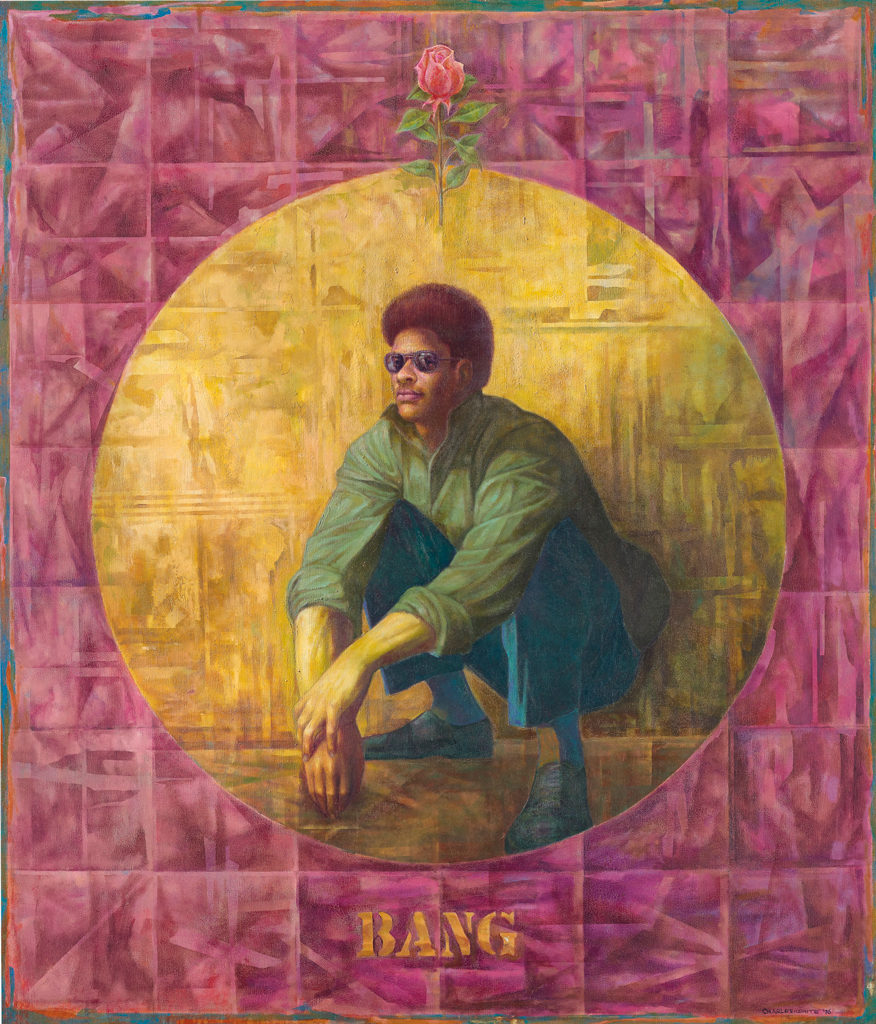 Growing some in both scale and dollars, Joan Mitchell’s serenely colored mural-sized triptych, Plowed Field (1971), wall hugging at 112 by 213 inches, went to a bidder in the room for $13.3 million (est. $12 million–$18 million). It last sold at auction at Christie’s New York in November 2003 for $657,100, making tonight’s result only the latest sign of her grandly expanded market power.

Less familiar but also growing in stature posthumously, following a 2016 traveling retrospective and a recent exhibition at Mnuchin Gallery in New York, Alma Thomas had her radiant abstraction and aptly titled A Fantastic Sunset (1970) sell for an artist-record $2.66 million (est. $2.2 million–$2.8 million). Like the Mitchell, it was backed by a third-party guarantee, but carried a rather sketchy provenance detail, having been in the collection of convicted sex offender Bill Cosby.

Also appearing for a first time in an evening auction, American artist Charles White debuted with Banner for Willie J (1976), which depicts in masterly fashion a kneeling figure with an Afro and sunglasses. It sold to a telephone bidder for an artist-record $1.22 million (est. $1 million–$1.5 million). A single rose floats over the figure’s head and the word BANG is painted in stencil at the bottom of the canvas.

Exhibited in the recent White retrospective that began its tour in the artist’s hometown, at the Art Institute of Chicago, the figure in the painting is a cousin of White, killed as an innocent bystander by gunfire in a bar holdup.

A contemporary art auction would not be complete without at least one Jean-Michel Basquiat painting, and the artist’s early Extra Cigarette (1982), executed in acrylic and oil stick on wood and glass window with chain, realized $5.64 million (est. $5.5 million–$7.5 million). Each of the blacked-out windowpanes features a quickly drawn word and a picture, whether a car or the artist’s trademark crown. The title of the work is printed in large letters at the top of the found window frame. It has appeared three times at auction, the last being at Christie’s New York in May 2010 when it made $1.54 million.

Similarly omnipresent at auctions these days, Gerhard Richter was on hand with two works, led by the blurred-photo painting Vogelfluglinie (1967), based on a found photograph of a passenger train entering the giant maw of a Baltic ferry terminal. Fresh to the auction market, it fetched $20.5 million (est. $18 million–$25 million) and came insured with a third-party guarantee.

Dashing out of the salesroom, Francis Outred, Christie’s former head of postwar and contemporary art in Europe and now a private dealer, said, “What I saw was a strong night, with deep bidding and global activity. It was also my first time bidding as an observer.”

The evening action resumes, and concludes for the week, on Thursday, with back-to-back sales at Phillips and Sotheby’s.