Skip to contentSkip to content
Blouin Artinfo
Christie’s Breaks Another Record With an Assist From Asian Bidders
May 15, 2014 by Judd Tully 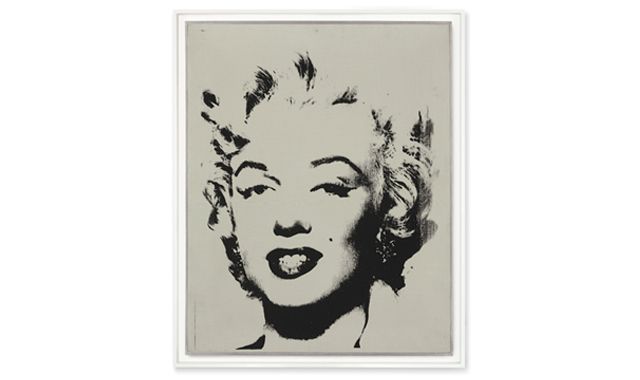 In a night rich in $20 million-plus offerings, Christie’s brought in a mind-boggling $744,944,000 in its Post-War and contemporary art evening sale at Rockefeller Center on Tuesday, the highest tally ever for any auction.

Seventy-two lots were offered, with pre-sale expectations in the region of $500 million (Christie’s didn’t release exact figures, since five of the big, $30 million-plus lots carried “estimate on request” descriptions, meaning the house wasn’t divulging what it expected for those works). Of those 72, only four failed to find buyers, for an extraordinary buy-in rate of six percent by lot and two percent by value.

Forty of the lots were guaranteed, with the majority, 34, financed directly by Christie’s, six by anonymous third parties.

The whopping tally smashed both last May’s record of $495,021,500, also set by Christie’s New York at post-war and contemporary evening sale, and the house’s more recent world record, from November, of $691.5 million, in an evening sale in the same category that brought $142.4 million for Francis Bacon’s “Three Studies of Lucian Freud.”

On Tuesday, 63 of the 68 lots that sold made over a million dollars and of those, four exceeded the $50 million mark and two made more than $80 million. Ten artist records were set.

Fourteen standout works from the storied collection of Chicagoans Edwin A. and Lindy Bergman started the evening, with Joseph Cornell’s Hollywood homage “Untitled (Penny Arcade Portrait of Lauren Bacall)” from circa 1945-46—consisting of the wood box construction as well as the paperboard folder working model—selling to a telephone bidder for $5,317,000 (est. $4-6 million). Larry Gagosian was the underbidder.

Another of Surrealist-influenced Cornell box, the 14-inch high “Medici Slot Machine” from 1943, sold to another telephone bidder for $7,781,000 (est. $2.5-3.5 million). The New York art advisory team of Ruth Catone were part of the large posse of underbidders.

During a marathon bidding duel, the magnificent mobile, seemingly energized by the bidding, began to spin lazily in its spot over the center of the jam-packed salesroom.

The Bergman collection also a Picasso work, the rigorously dark and powerful oil “Tete de femme a deux profils” from 1939. Though the artist is usually found at Impressionist and Modern sales, he did well in this contemporary venue, bringing $9,013,000 from another anonymous telephone bidder (est. $4-6 million).

All of the Bergman lots were guaranteed by Christie’s, and overall they made $65.5 against pre-sale estimates of $30-40 million.

The first of the evening’s mega lots came up next: Gerhard Richter’s large-scale “Abstrakts Bild (712)” from 1990. Squeegeed with great elan and color-bursting effects, it sold for $ 29,285,000, once again to a bidder on the phone with Xin Li (est. $22-28 million). It was protected by a third-party financial guarantee.

The painting had last come up at Sotheby’s New York in November 2012, when it sold for $17,442,500 against an unpublished estimate. The increase—nearly $12 million in less than two years—seems a reflection how crazily the Post-War market has grown.

At different moments in the two-and-a-half hour marathon, Li wielded two, and at one point three, telephones, juggling her clients with the ease of a circus performer, or at least it seemed so.

The big daddy of the Basquiat entries was an “Untitled” from 1981, a mural scaled at 68 by 103 inches and executed in acrylic, oilstick and metallic spray enamel on canvas, which fetched $34,885,000 (est. $20-30 million). A crowned and naked warrior figure dominates the center of the canvas, brandishing a sword in one hand and a cluster of arrows in the other, obviously ready for combat. Basquiat’s graffiti-like writings cover the composition, which is further animated by its electric orange, pink and yellow hues.

It was offered without a guarantee from the Washington, D.C.-area estate of collector Anita Reiner, who acquired it from the Anina Nosei Gallery in New York in 1982.

The roster of heavyweight lots continued in lockstep as Francis Bacon’s gold-framed triptych “Three Studies for Portrait of John Edwards,” from 1984, sold to a Li phone bidder for $80,805,000 (unpublished estimate in the region of $75 million).

Brett Gorvy, Christie’s worldwide head of Post-War and Contemporary art and arguably one of the most influential players in the global art market, was the underbidder.

Another standout offering, the four-part Andy Warhol “Race Riot” from 1964, executed in acrylic and silkscreen ink on linen, drew intense competition, going to Larry Gagosian for $62,885,000 (unpublished estimated in the region of $45 million). Private dealer Jose Mugrabi was one of the posse of underbidders. Three of that posse were still in the action above fifty million dollars.

The still-shocking serial image of a black man being attacked by a police dog in segregated Birmingham, appropriated from a Charles Moore photograph, last sold at auction at Christie’s New York in November 1992 for $627,000—just about 100 times less than it made on Tuesday.

The night reached another peak in the Abstract Expressionist realm, with Barnett Newman’s magisterial black and white painting “Black Fire I” from 1961, grandly scaled at 114 by 84 inches, selling for a record setting, top-lot figure, $84,165,000 (unpublished estimate in the region of $50 million).

The anonymous seller acquired the work from the Mayor Gallery in London in 1975 for approximately $150,000 barely a year after it fetched $95,000 at Sotheby’s Parke Bernet in New York, according to James Mayor, who sold the picture to the consignor. Tonight it sold without the backing of a guarantee.

“I think certain paintings, whatever you pay, is cheap,” Mayor said when he was buttonholed in the salesroom shortly after the Newman sold.

Another Ab-Ex master also brought a very big result, with Mark Rothko’s radiant and large-scaled “Untitled” from 1952 selling to a Li telephone bidder for $66,245,000 (unpublished estimated in the region of $50 million).

It might be cheesy to say that Chinese bidding has accounted for a great leap forward in the global art market, but it would not be an exaggeration. On Tuesday, Li’s clients accounted for 214,185,000 of the evening’s total.

The painting, which last appeared in the artist’s posthumous retrospective at the Museum of Modern Art in 1978, came ‘bare,’ that is, without a guarantee. So too did Jackson Pollock’s non-drip, black and white “Number 5, 1951/Elegant Lady,” which sold from the German based E.ON Art collection for a tame $11,365,00 (est. $12-18 million).

Pollock reportedly traded the painting to New York dealer Martha Jackson in 1954 in exchange for a brand new Oldsmobile convertible, the very car he died in two years later. While the provenance trail lists the Knoedler Gallery, a possible concern for wary buyers, the painting is listed and illustrated in the definitive Jackson Pollock catalogue raisonné.

Of the suite of lots that set artist records, Joan Mitchell’s vibrant and color-charged abstraction “Untitled” from 1960, which triggered a torrent of bidding to $11,925,000 (est. $6-9 million), was notable for also becoming the most expensive work of art by a woman artist ever sold at auction.

There were plenty of other juicy paintings on offer, including Willem de Kooning’s bravura composition “Untitled XXXI” from 1977, one of eight works from the Phillip Schrager Collection, which went for $21,165,000 (est. $8-12 million).

“I tried,” said New York dealer Robert Mnuchin, one of the underbidders on the de Kooning. “But I didn’t buy anything.”

That was a refrain expressed by a number of frustrated bidders, blown away by the depth of this market.

Among the bright and shiny offerings, Jeff Koons’s eye-popping, mirror-finish sculpture “Jim Beam-J.B. Turner Train” from 1986, cast in stainless steel and containing bottles of now vintage Jim Beam bourbon, sold to a Li phone bidder for $33,765,000 (unpublished estimate in the region of $30 million).

The train, envisioned after Koons saw a plastic and porcelain model of it in a shop front on Fifth Avenue, and eventually cast it in stainless steel, was his first effort in that medium. It was originally exhibited in the East Village at International with Monument Gallery as part of Koons’s early solo, “Luxury and Degradation.” Major collectors, including Eli Broad, Stefan Edlis and Dakis Joannou, own other sets from the edition of three plus one artist proof.

At the (relatively) low end of this sale, Robert Gober’s top-class “The Silent Sink,” in plaster, wire lath, wood and semi-gloss enamel paint, also did well, selling to curator/advisor Skarlet Smatana on behalf of collector George Economou for $4,197,000 (est. $2-3 million). David Zwirner was the underbidder.

“I think that was a good deal,” said Smatana as she left the salesroom, “but gone are the days of opportunities.”

As if on cue, George Economou rushed by, noting, “we’re always happy when we buy something.”

It’s getting tougher for most people to do that these days. “It’s a bull market sale,” said New York advisor Todd Levin as he exited Christie’s for some fresh air on West 49th Street. “And its bull market art.”

The evening contemporary art action resumes at Sotheby’s on Wednesday.