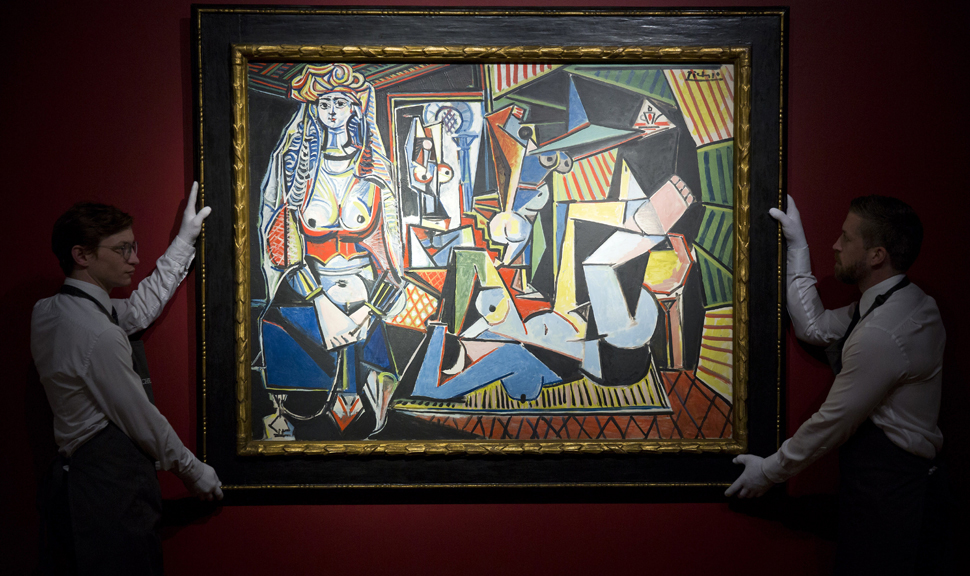 Though the art market continues to post huge gains, six-month figures released by Christie’s today show at $4.5 billion a flat line and close to virtual tie for what the market leader firm achieved for the same period in 2014. That jumbo figure includes both auction and private sales, the latter contributing $515 million to the overall tally, substantially down from $828.2 million achieved for the same period in 2014.

By contrast, Sotheby’s realized $3.16 billion for the same period in auction sales alone and virtually pulled in the same amount for the corresponding period in 2014. Sotheby’s, a publicly traded company and the oldest firm registered on the New York Stock Exchange, releases its full first half results in early August.

Christie’s is privately traded, and hence not governed by more stringent and detail oriented reporting standards mandated by the SEC (Securities Exchange Commission), including quarterly reporting of profit and loss figures.

Sotheby’s figures, unofficially released today, do not include private sales for the company, including a reported £35 million private sale of a Rembrandt masterpiece, “Portrait of Catrina Hooghsaet” from 1657, that took place earlier this summer.

Christie’s continued dominance in the Post-War/Contemporary arenas accounted for much of that substantial gap between arch-rival Sotheby’s, as did the firm’s unprecedented $1.7 billion cross-category sale week in May that included two 20th-century masterworks, Pablo Picasso’s “Femmes d’Alger (Version “O”)” from 1955 and Alberto Giacometti’s “Point Man” from 1947, which together pulled in $320.7 million. Both of those works were included in the one-off “Looking Forward to the Past” evening sale at Christie’s on May 11, which included both Modern and Contemporary periods and realized $705.8 million.

Post-War and Contemporary art at Christie’s raked in $1.4 billion for the first six months of 2015, up 8 percent from the same period in 2014. The house’s numbers were equally impressive in the shrinking world of Impressionist and Modern art, as the firm sold $1.19 billion in the first half, a 33 percent increase over the $939.3 million sold for the same period in 2014.

Not to quibble over that statistic, it is still interesting to note that $320.7 million of that 2015 figure accounted for two works of art (the Giacometti at $141.3 million and the Picasso at $179.3 million), neither of which sold in Christie’s May 14 Impressionist & Modern evening sale but broke individual artist records in the aforementioned “Looking Forward to the Past” evening sale on May 11. (The top lot in Christie’s Impressionist & Modern evening sale on May 14 was Piet Mondrian’s “Composition No. III, with Red, Blue, Yellow and Black, 1929,” which sold for a record $50.5 million to New York art advisor Amy Cappellazzo; overall, that sale tallied $202.6 million.)

Another upbeat arena for Christie’s was in the category of Asian art, which realized $461.4 million for the first half, 25 percent higher than the same period in 2014. A big chunk of that figure came from the series of single owner sales from the esteemed collection of Robert Hatfield Ellsworth, known as the “emperor of the Asian art world,” which fetched $134 million at Christie’s New York in March, four times over pre-sale expectations.

Speaking to Christie’s continued market share lead and the undiluted strength of the American buyer, Marc Porter, chairman of Christie’s America, said, “Thirty-four percent of overall buying in our first half globally was from American buyers, disproving the presumption that American buyers are no longer the dominant force in the market. The fact is, they are and continue to be. Overall, they represent about a quarter of the new buyers at Christie’s and they buy over one-third of what we do.”

There’s still no crystal ball for what’s in store for the second half of 2015, including the much anticipated round of New York auctions in November, though the raging battle between the auction duopoly for the juicy estate prize of A. Alfred Taubman’s collection, the late and one-time owner of Sotheby’s, will tell part of the tale.

This entry was posted in Auctions and tagged A. Alfred Taubman, Christie’s, Marc Porter, Pablo Picasso, Sotheby’s. Bookmark the permalink.