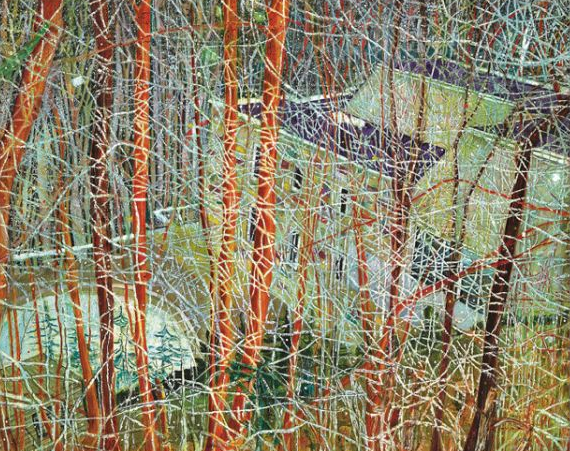 Only seven of the 61 lots offered failed to sell, for a crisp buy-in rate by lot of 11 percent.

The sale got off to an energetic start thanks to a trio of fresh-to-market Alexander Calder works from the estate collection of New Yorkers Arthur and Anita Kahn.

David Nahmad was the underbidder.

The Crag had been acquired from Calder’s primary American dealer at the storied Perls Gallery in New York in 1974, the year it was created.

The presence of prime estate material in the sale added the needed charge to elicit bidding that often went beyond the mostly conservative pre-sale estimates. Christie’s got it right in that department.

A grouping of Minimalist minded works from the collection of Marc and Frederique Corbiau, the former a reknowned Belgian architect, was well received, including Jan Schoonhoven’s Zero Group-era constructed “Relief” from 1971, executed in painted white cardboard, which went for £458,500/$665,284 (est. £180-250,000), and Lucio Fontana’s matching white “Concetto Spaziale Attese” from 1964, bearing five vertical slashes, which sold above estimate to another anonymous telephone bidder for £1,762,500/$2,557,388 (est. £1.2-1.8 million).

Fernando Mignoni of Madrid’s Galelria Elvira Gonzalez was the underbidder.

All ten works from Corbiau were backed by third party guarantees, and together contributed £5.8/$8.4 million to the evening total, well above the £3.6-5.1 million pre-sale expectations.

Beyond Corbiau, Christie’s solely guaranteed two lots, a big drop from the guarantees it arranged for last November’s $331.8 million Post-War/Contemporary Art sale in New York and perhaps another indication that such risk-taking is less appealing in a changing market.

That absence certainly killed one of the evening’s highest valued lots, Yves Klein’s action packed “Anthropometrie sans titre (ANT 118)/(Untitled Athropometry, (ANT 118)” from 1960, executed in dry pigment and synthetic resin on paper laid down on canvas and bearing the indelible body print of two nude figures in Klein’s signature blue. It bought in at a chandelier bid of £7.5 million (est. £8-14 million).

But apart from the rejected Klein, nine of the top ten valued lots found buyers.

If you haven’t already guessed, Fontana is the European Post-War market equivalent of Warhol at auction, with multiple works appearing in every evening venue.

“I bought it on behalf of a collector who is a big Man Ray fan and a big Warhol fan,” said Maclean as he exited the packed salesroom. “So it’s the perfect piece for him.”

Other highlights included Gerhard Richter’s blurry, deliberately faulty photographic image “Kleine Sekretarin (Little Secretary)” from 1965, in oil on canvas, featuring a young secretary seated at a modern desk. Part of the artist’s Capitalist Realist paintings series, it sold to London/Hong Kong dealer Ben Brown for £626,500/$909,052 (est. £500-700,000). The anonymous seller had acquired the petite canvas directly from the artist in 1965.

Both paintings had been included in major Freud exhibitions, including his breakout U.S. retrospective at the Hirshhorn Museum and Sculpture Garden in Washington, D.C., in 1987-88, and his National Portrait Gallery (London) show in 2012.

Fellow School of London star Francis Bacon was represented by the dynamically intertwined “Two Figures” from 1975, a slender, 78-by-27 ¾-inch canvas depicting Bacon and his lover George Dyer, locked in an embrace.

Dyer committed suicide in 1971, on the eve of Bacon’s important exhibition at the Grand Palais in Paris, and this work is from the tail end of a series referred to as the Black Triptychs that memorialized the relationship and that event. It sold to an unidentified bidder standing at the back of the salesroom for £5,458,500/$7,920,284 (est. £5-7 million).

Long in the collection of writer and Bacon confidant Michael Peppiatt, to whom the artist gave it to in 1975, the work was literally split in two by Bacon sometime later, removing what had been the third figure in the composition, a voyeuristic dwarf. That painting is now in a private Australian collection.

Another major offering from the British Isles, Peter Doig’s celebrated and large-scaled “The Architect’s Home in the Ravine” from 1991, replete with references to Le Corbusier, sold to another telephone bidder in a brief two-bid duel for the top lot price of £11,282,500/$16,370,908 (est. £10-15 million).

It had last sold at Christie’s London in February 2013 for £7,657,250 against a £4-6 million pre-sale estimate. This time it came to market backed by a third party guarantee, assuring it would sell.

Nick Maclean was the underbidder.

“We really had the right sale for this moment,” said Edmond Francey, Christie’s London head of Post-War and Contemporary Art.

Christie’s was the final evening sale of the week and the chatty community of numbers crunchers and art-market pundits will have plenty of time to analyze the mixed results before the next big round of auctions take place across the pond in May.