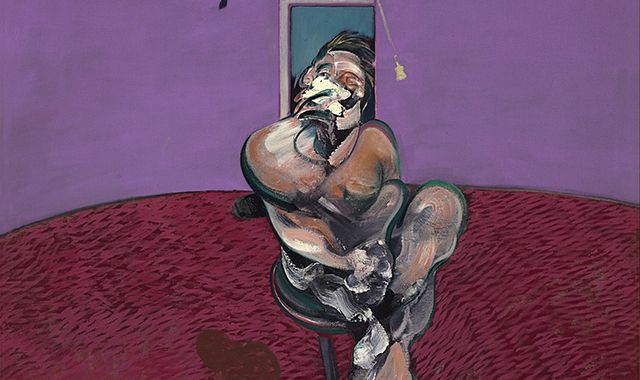 Seventeen works sold for over a million pounds, 25 hurdled the million dollar mark, and seven artist records were set. Only eight of the 48 lots offered failed to sell, for a trim buy-in rate by lot of seventeen percent and five percent by value.

Thursday’s auction started with the sale for charity of Damien Hirst’s personally donated “Mickey” from 2012, a spot painting in household gloss on canvas that depicts an abstracted version of the Disney mouse. It sold for an impressive £902,500 ($1,498,150; est. £300-500,000/$500-820,000) and benefitted Kids Company, a UK-based organization providing support to vulnerable inner-city youth.

In a surreal moment of marketing, all of the specialists and client service reps manning the banks of telephones donned black Mickey Mouse ears for the Hirst, which made for a light mood in the jam-packed salesroom.

The evening also included a group of several paintings and a sculpture by artists made famous by ther inclusion in the epoch-making 1997 show “Sensation: Young British Artists from the Saatchi Collection.”

Though not the hot commodities they were in the late ’90s, the group seems to have some legs for future appreciation.

“Sensation” aside, the biggest drama of the sale swirled around Francis Bacon’s “Portrait of George Dyer Talking,” from 1966, a seminal and rare-to-market depiction of the artist’s lover and muse seated cross-legged on a bar stool in the middle of an otherwise empty studio—a scene dominated by a bare hanging light bulb, a red carpet and monochrome wall painted in an eye-popping shade of lilac. Dyer tragically committed suicide just hours before the opening of Bacon’s retrospective at the Grand Palais in 1971. This work was included in that exhibition, and its history no doubt fueled the competition to own it, which ended with whopping top-lot bid of £42,194,,500 ($70,042,870; est. on request in the region of £28/$47 million).

The Bacon last sold at auction at Christie’s New York in November 2000 for $6.6 million, a record at the time. On Thursday night it carried a third-party financial guarantee.

Brett Gorvy, Christie’s world-wide head of contemporary art, took the winning bid, which beat back six other contenders. After the sale, Gorvy acknowledged the buyer was American but declined to give further details, apart from saying, “he’s a very good poker player and has great taste.”

Though two Bacon triptychs have sold for more, including ‘Three Studies of Lucian Freud” from 1969 that made a record $142.4 million at Christie’s New York in November, this portrait stands as the most expensive single Bacon canvas, vanquishing “Study from Innocent X” from 1962, which sold at Sotheby’s New York in May 2007 for $52,68,000.

Asked about the price, veteran dealer David Nahmad, who watched the action from the front row of the salesroom but didn’t bid on the picture, said, “I don’t know anymore, but I bought my first Bacon, a portrait of a businessman, at auction in London in 1964 for £800.” Thursday at Christie’s, he added, “was another crazy night at the auctions.”

Other standout offerings included Gerhard Richter’s “Abstraktes Bild” from 1989, tapestry-like in its scale and richly marbled in a cacophony of colors, which fetched £19,570,500 ($32,487,030; est. on request in the region of £15 million). It too carried a third-party financial guarantee, meaning the seller wanted insurance that the painting would sell for a certain price no matter what transpired in the salesroom. Xin Li, Christie’s deputy chairman of Asia, took the winning telephone bid.

Another Richter, “Portrait Schniewind” from 1965, a grainy and cropped example of the artist’s photo-realist black and white work, failed to sell at £1.4 million—just not sexy enough, it seemed, for current taste (est. £2-3 million/$3.3-4.9 mllion).

More remarkable was the fevered bidding for Domenico Gnoli’s Pop Art-like figurative painting “Black Hair” from 1969, in acrylic and sand on canvas, which ultimately sold to London dealer Guya Bertoni, who apparently beat out a determined Chinese telephone bidder. Bertoni acknowledged that she had bought the painting on behalf of a client as she raced out of the salesroom.

Jeff Koons’s perfectly cast “Cracked Egg (Magenta)” from 1994-2006, fabricated as one of five unique versions in mirror-polished stainless steel with transparent color coating, sold to another telephone bidder for £14,082,500 ($23,376,950; est. £10-15/$17-25 million). Part of Koons’s storied “Celebration” series, this version of the pristine egg was part of his 2008 retrospective at the Museum of Contemporary Art in Chicago. It was the first appearance of a Cracked Egg at auction.