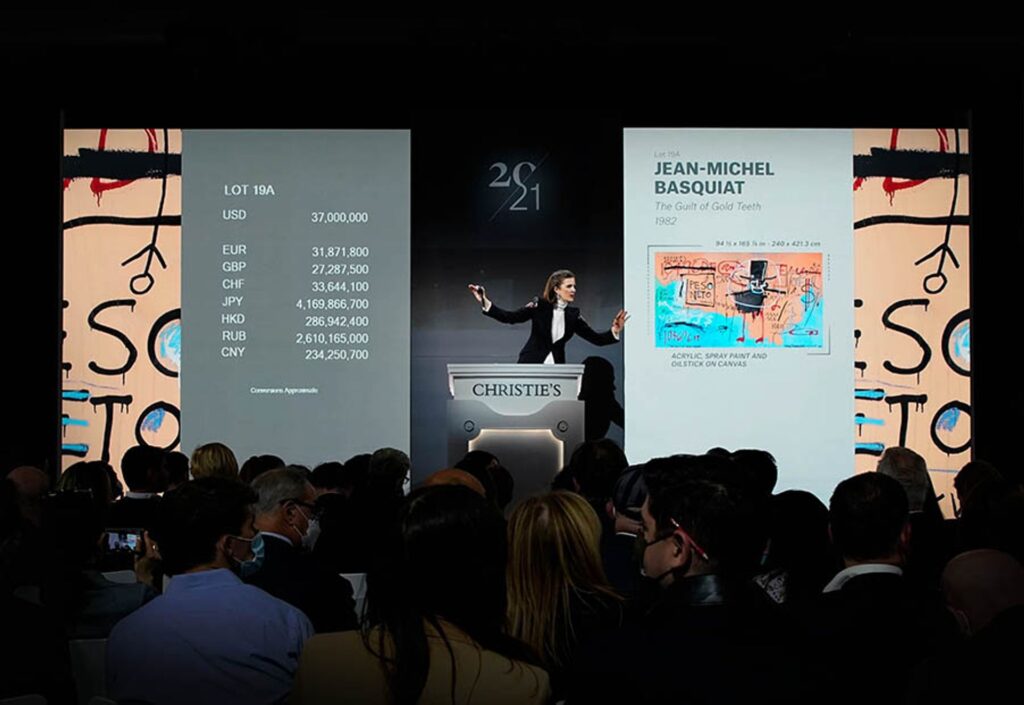 Christie’s pulled off a rare, white glove, 100%-sold evening sale of 21st-century art, and with it, injected the market with a reaffirming blast of bullish buying.

Remarkably by any account, all 40 lots sold and ten artist records were set.

Christie’s freshly hatched category of ‘21st Century’ sales was inaugurated in May with a $210.4m result led by Jean-Michel Basquiat’s In the Case that fetched $93.1m.

Last night, 20 of the 40 lots offered were backed by third-party guarantees and two carried house-backed guarantees, assuring the success of more than half the entries before the sale commenced. 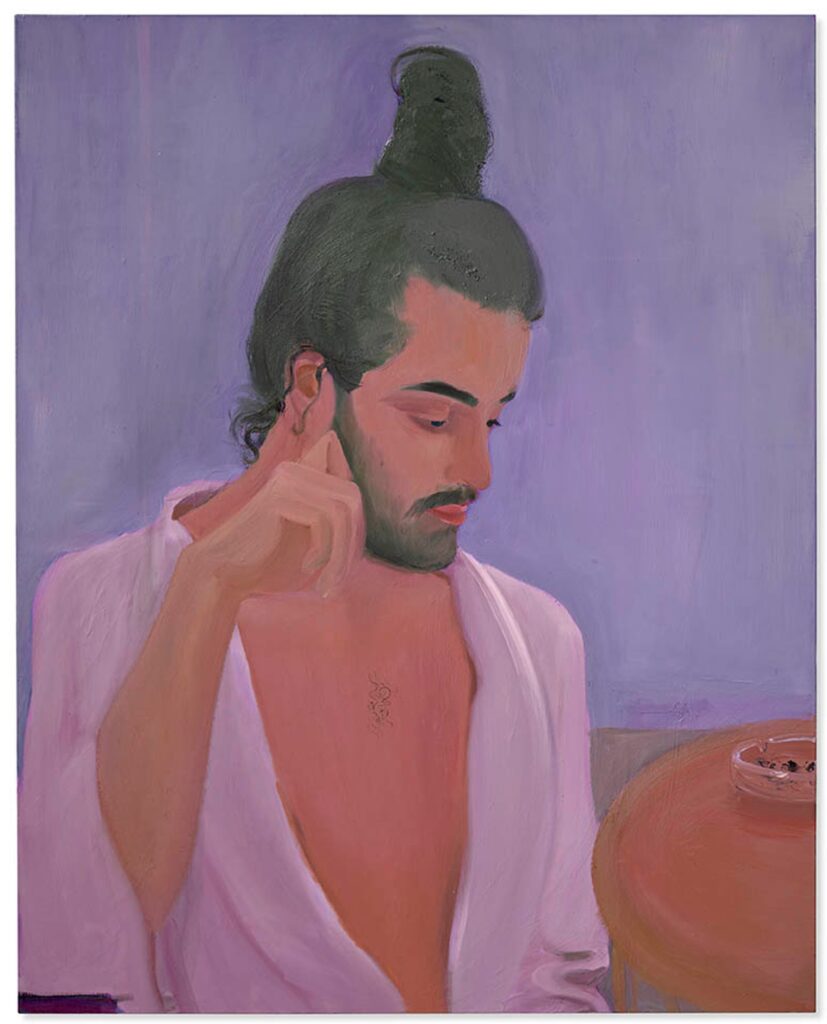 The price points shifted sky higher with Beeple’s kinetic video sculpture Human One from 2021, billed as the artist’s first “physical artwork” and dominated by a striding, nearly seven-foot-high figure outfitted in a kind of other worldly space suit. Also comprised of four video screens, polished aluminum metal framework and what Christie’s described as “endless video with corresponding dynamic non-fungible token,“ blasted to $25m ($29m with fees) against an unpublished estimate in the region of $15m. It came backed by a third-party guarantee.

The work was acquired by the tech entrepreneur Ryan Zurrer, who enthusiastically announced on Twitter that he had “secured the ONE”. Beeple responded to Zurrer’s post saying he was “insanely honoured” to be in his collection. 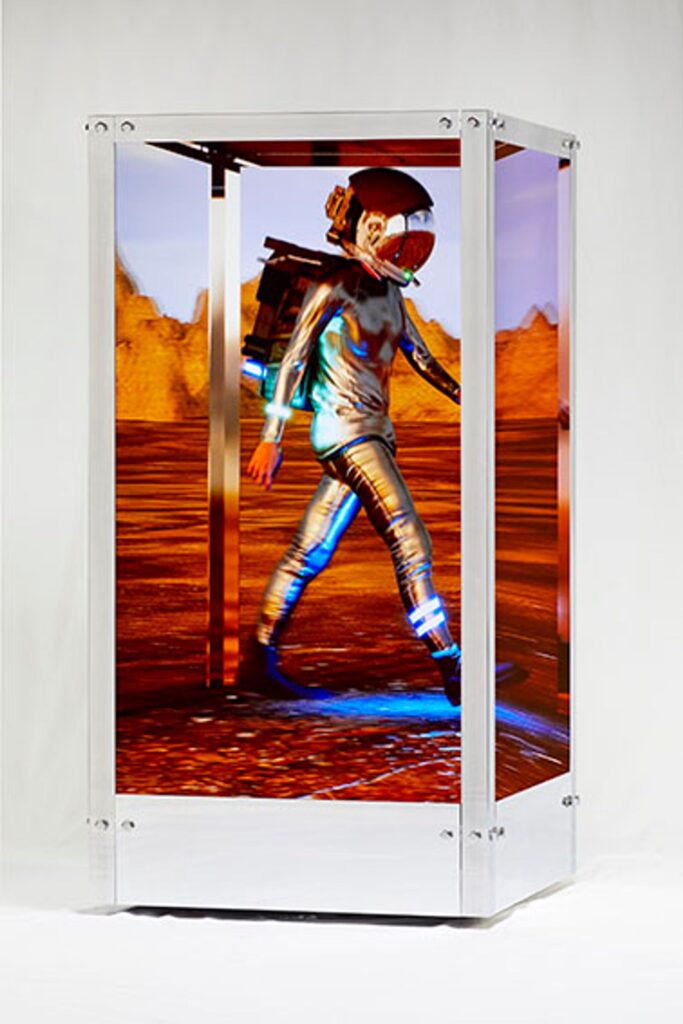 In the more established and keenly sought after painting arena, Stanley Whitney’s jazzy and geometrically colour-charged, Untitled from 1999 made $1m (a record $1.2m with fees) and Peter Doig’s richly impastoed and convincingly reflective Swamped from 1990 with its centrepiece white canoe, floated to a record $34.5m ($40m with fees) against an unpublished estimate in excess of $35m.

It came to market backed by a third-party guarantee. 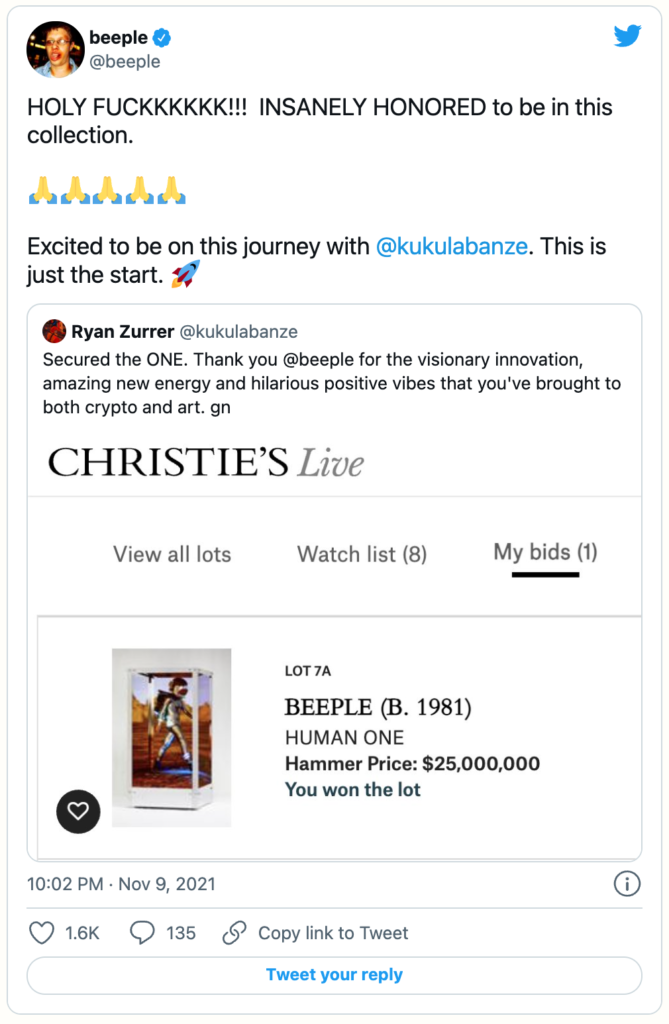 Before the drum roll of the evening’s top lot, Banksy’s fume-polluted ode to Van Gogh, Sunflowers from Petrol Station from 2005 and bearing the Pest Control certificate of authenticity, barely bloomed at $12.4m ($14.6m with fees) against an estimate of $12m-$18m.

The seller, none other than the haberdasher supreme Paul Smith, acquired it from a temporary gallery at 100 Westbourne Grove in London in 2005 at the time of Banksy’s solo show Crude Oils: A Gallery of Re-mixed Masterpieces, Vandalism and Vermin.

It also was backed by a third party guarantee. 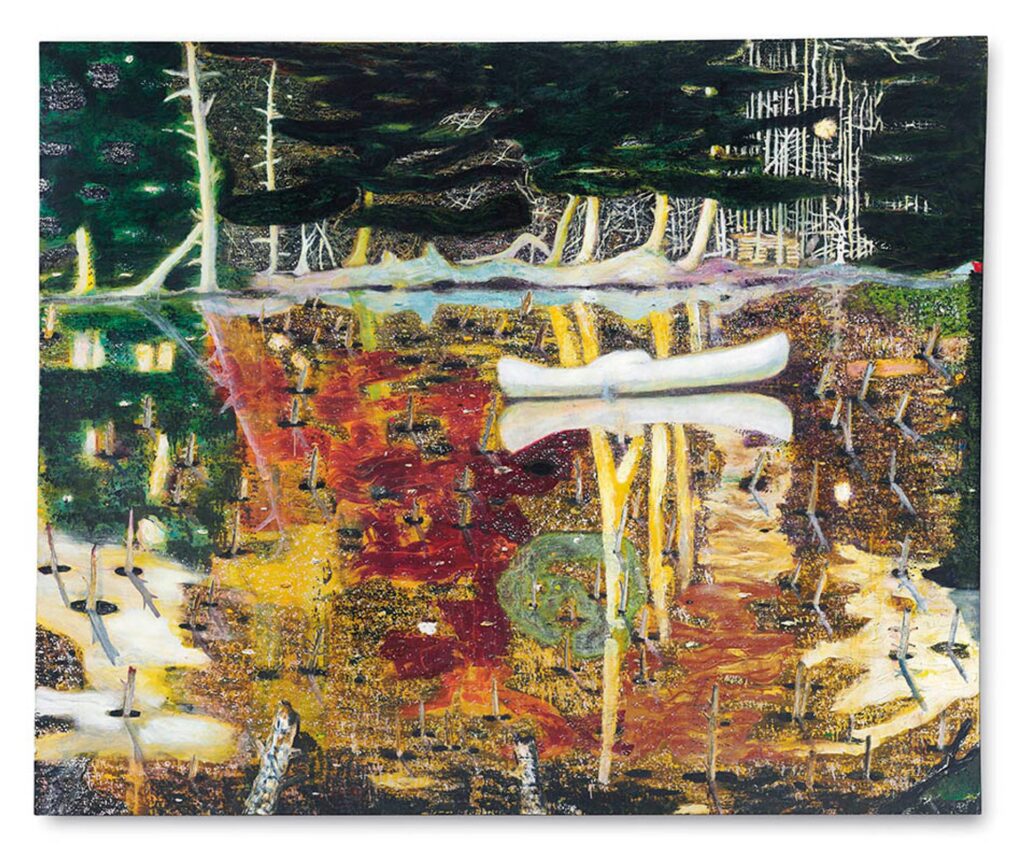 The split-decision entry of the live auction evening went to Jean-Michel Basquiat’s massive and arresting The Guilt of Gold Teeth from 1982 and painted in Modena Italy during the wunderkind artist’s first foray in Europe, fetched $37m ($40m with fees), barely beating the Doig. It came backed by a third-party guarantee and a very broad estimate range of $40m-$80m.

“Our job is to sell as much as we can for as much as we can”
The central figure, with its painted white face, black top hat and blood-red, stick-figure legs is a chilling homage to the Haitian voodoo figure of Baron Samedi, a master of the dead. 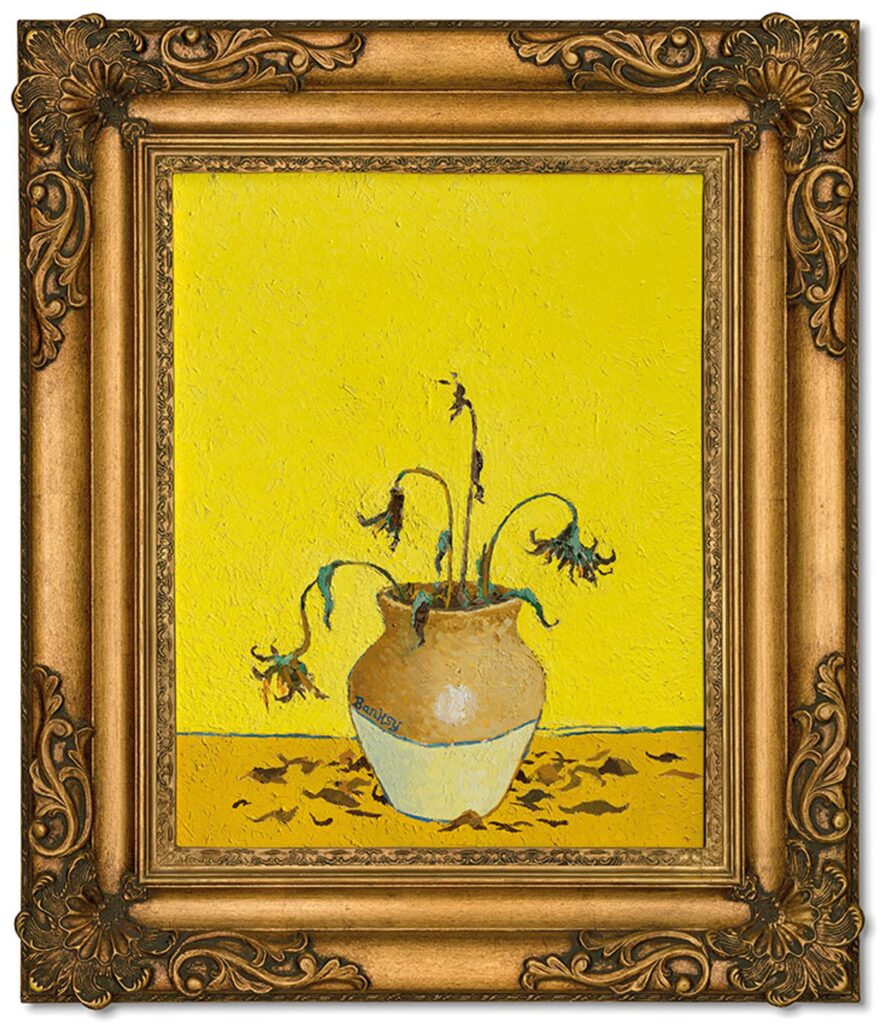 A second Basquiat offering, also bearing an Italian flavour, Flash in Naples from 1983 and displaying the same electric ingredients of acrylic, oil and oilstick on canvas, realised a more robust $17m ($20m with fees) against a $14m-$18m. Amy Cappellazzo of the art advisory Art Intelligence Global was the underbidder for the work.

It last sold at Sotheby’s New York in November 2017 for $8.1m, a stellar indicator of the artist’s gold standard market might. 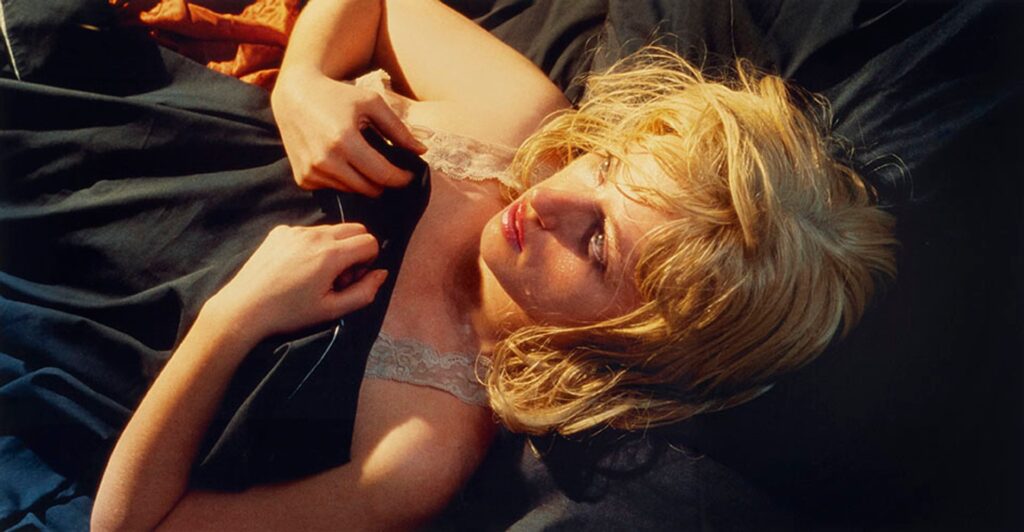 Of the three offerings of Cindy Sherman works, Untitled from 1981 from her widely exhibited Centerfolds series and featuring the artist posed under silk bed sheets, hit $2.6m ($3.1m with fees) against an estimate of $2m-$3m.

In the sculpture arena, David Hammons’s stunning wall mounted mélange of 13 African masks and assorted detritus sold to the dealers Lévy Gorvy for $3.1m ($3.7m with fees) against an estimate of $3m-$5m.