Skip to contentSkip to content
Blouin Artinfo
Auction Report: “If I Live I’ll See You Tuesday” at Christie’s
May 12, 2014 by Judd Tully 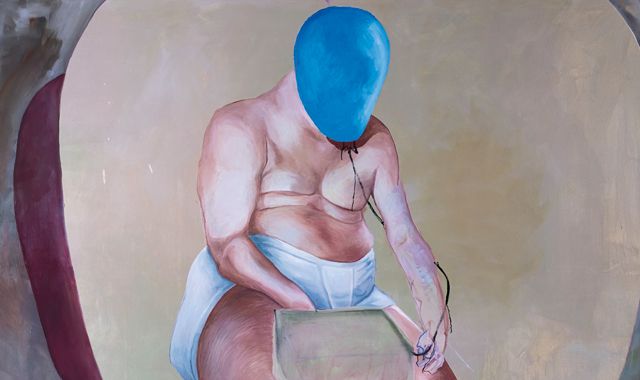 The contemporary art auction season opened during happy hour on Monday with a loud bang at Christie’s, as the bespoke and trendy “If I Live I’ll See You Tuesday” sale made $134,630,000. Of the 35 lots offered, all but one sold for a skinny buy-in rate by lot of five percent and 99.5-by value. The tally resoundingly beat pre-sale expectations of $92,960,000-124,080,00, that is, before the post-sale add-ons of the individual buyer’s premium.

Twenty of the 34 works sold went for over $1 million and of those, eight exceeded $5 million and four hurdled the $10 million mark. More impressively, or so it would seem, 14 artist records were set, from newbie painter Alex Israel to the late Martin Kippenberger.

Since this is a one-off sale, “curated” by Christie’s, there are no direct comparisons, though Phillips de Pury’s toppy and customized “Carte Blanche” auction, organized by private dealer Philippe Segalot in November 2010, made $137 million for the 52 lots that sold.

The raison d’etre of this effort, according to Loic Gouzer, the Christie’s specialist who organized the sale, was to give bigger play to artists who largely came to fame in the 1980s and ’90s, yet are sometimes squeezed out of klieg light attention due to pricier offerings in the Ab-Ex , London School, and Pop Art arenas.

“It’s a risk mission,” said Gouzer earlier this spring as the sale was coming together. “These evening sales have become so big that a classic from the ’80s almost has no room in these sales anymore.”

Still, the “risky” sale was front-loaded with 14 guarantees or 39 percent of the lots offered, assuring sales of those works no matter how they performed in the salesroom. Of those, one was financed directly by Christie’s and 11 by anonymous third parties, the latter receiving undisclosed, deal-by-deal compensation for the risk-taking, including a percentage of the buyer’s premium.

“What happens,” questioned New York dealer Emmanuel Didonna as he joined the happy crowd of attendees waiting for limos and Uber cars immediately after the sale, “if none of this is guaranteed? That’s another question.”

In Christie’s fine print language at the back of the auction catalogue, for those successful third-party bidders, “the remuneration may be netted against the final purchase price.”

There was also a bit of scheduling drama, as the 6 p.m. scheduling of the sale forced boutique scaled Phillips to move its evening sale to Thursday, usually the time zone when European collectors jet back home in time for the weekend. None of those preliminary factors seemed to have any negative bearing on the evening, as Cady Noland’s (lot 1) edgy wall relief, “Percussion and Cartridge Revolvers,” from 1984, including police equipment and an illustrated guide book to pistols and revolvers, sold to dealer Larry Gagosian for $509,000 (est. $80-120,000). As auctioneer Jussi Pylkkannen hammered down the work at $420,000, he uttered, “Thank you, Larry.”

First name IDs are rarely used in the salesroom, but this was a kind of down home evening for contemporary art players.

The numbers quickly grew larger as (lot 2) Christopher Wool’s graphic alkyd and graphite “Untitled” work on paper and bearing the big block text “CATS INBAG BAGS IN RIVER,” from 1990, made $1,445,000 (est. $1-1.5 million), selling to a private bidder seated in the second row of the salesroom.

Richard Prince’s (lot 11) third party guaranteed “Nurse of Greenmeadow,” from 2002, appropriated from the lurid cover of a paperback romance novella and representing a large-scale 78- by 58 -1/2-inch example from his storied series, realized a record $8,565,000 (est. $7-9 million), going to an anonymous telephone bidder.

After the brief evening, representing half of what Christie’s will be offering on Tuesday, market-making dealer Alberto Mugrabi posited, “Richard Prince is the most important living artist in America.”

Indeed, it was a kind of post-market rehab night for Prince, who was represented by five works, all of which sold, although four were aided by third party guarantees. As for the Wool, the 32 3/8- by 22-inch work on paper last sold at Christie’s New York in May 2009 for $386,500, making it a big meow pleaser for the seller.

Another third party financed entry, (lot 12) David Hammons’s formal yet funky wall relief, “Untitled” from 1978 and comprised of spear shaped phonograph record fragments, colored string and hair, made $3,525,000 (est. $2-3 million), selling to the telephone via Christie’s glamorous Xin Li, deputy chairman, Asia. Xin’s telephone played a starring role in the evening, showing once again the growing and aggressive impact of Asian bidding in both the Impressionist/Modern and contemporary arenas.

David Zwirner was one of the underbidders — it has been part of his stable since 2004.

The choreography between newbies and blue chip veterans continued as the compelling Martin Kippenberger (lot 13) pseudo self-portrait, “Untitled” from 1988 and based on a famous photograph of Pablo Picasso posed in his skivvies with his Afghan hound by his side, brought a record smashing $18,645,000, selling to Xin’s telephone bidder after a protracted bidding war with another telephone contender (est. $9-12 million). It was another third party backed lot, assuredly a big pay day for the anonymous backer.

Bidding opened at $6.5 million and got serious after nine million, with Xin’s phone dueling with Christie’s Robert Manley, who made a gallant but ultimately second place fight for the big underwear prize. It smashed the previous record $6.4 million, set for an earlier “Untitled” work from 1981 that sold at Sotheby’s New York last November.

The big ticket items continued to animate the season opening sale as Jean-Michel Basquiat’s (lot 23) early and impressively fierce “Made in Japan I,” from 1982, in acrylic and oilstick on paper, mounted on canvas, sold to the telephone for a relatively mild, at least by current standards, $8,005,000 (est. $7-9 million). It refreshingly went without the insurance of a guarantee, thus reflecting a more level playing field price. The Basquiat last sold at Sotheby’s London in October 2002 for £468,500 ($723,448), roughly speaking, a 10th what it fetched tonight.

The carousel of multi-million dollar lots continued to gather speed as Jeff Koons’s now iconic and still spectacular (lot 7) “Two Ball Total Equilibrium Tank (Speaking of Dr. J. Silver Series)” sculpture in a bespoke and filled fish tank from 1985 and from an edition of two, sold to a telephone bidder for $6,885,000 (est. $4-6 million).

A second Koons up for grabs, (lot 15) “Aqualung,” a bronze artist proof replica of the device from 1985, part of an edition of three, and consigned by Christie’s owner Francois Pinault, realized $11,589,000, going to international dealer David Namhad (est. $9-12 million), usually known for aggressively ruling the Impressionist and Modern market.

Gagosian was the underbidder (again).

Yet another Richard Prince offering, (lot 6) “If I Die” joke painting from 1990 and the eponymous inspiration for the much-hyped title of the evening sale, sold to another telephone for $4,650,000 (est. 3.5-4.5 million). It too was third party backed.

Another kind of joke painting but one done by current market darling (lot 10) Dan Colen, “Boo Fuck’n Hoo” from 2006 and depicting a snuffed out candle with its smoky trail making out the words in the title, brought a record $3,077,000 (est. $2-3 million).

While Richard Prince appeared to be the main drawing card or inspiration as it were of the heavily marketed evening, a bow to the dark side of (lot 20) Andy Warhol’s disaster paintings also made a cameo appearance with the lemon yellow “Little Electric Chair” from 1965 and measuring 22- by 28-inches. It made $10,469,000 (est. $7.5-.9.5 million).

According to the catalogue, it was last exhibited in Abu Dhabi in 2010-11 in the exhibition “From the Private Collection of Larry Gagosian.”

As the crowd streamed out of Christie’s Rockefeller Center headquarters for a post happy hour dinner, storied octogenarian Chicago art collector Stefan Edlis was asked if there were any lessons learned from the brief evening sale.

The evening action resumes Tuesday, again at Christie’s, with a big bout of Postwar and Contemporary offerings saddled with a low-end estimate in excess of $500 million.