The May contemporary art auction at the New York houses of Christie’s and Sotheby’s snared a whopping $18.2 million with Sotheby’s taking the lion’s share and almost doubling their Novem-ber sales record with $13.4 million.

Though a number of artists bombed out with so-so works not meeting their inflated reserves (Motherwell, Warhol, Frankenthaler, Diebenkorn, and Duane Hanson), quite a few records were smashed. The star of both shows was Barnett Newman’s Ulysses, which fetched $1,595,000 at Sotheby’s. In a scene tailored for Dallas, collector Christophe de Menil’s 11-foot-high canvas icon was bought by her mother, Francois, the world-famous Texas art collector.

More incredible still was the odys-sey of the 1954 Clyfford Still that was gavelled down at $797,500. “Burned” is a popular expression among savvy players when referring to a work that’s been on the market without finding a buyer. Still’s untitled canvas was such a candi-date, and one prominent New York dealer had it languishing in his back room at a third off the price it nabbed at auction. Lucy Havelock-Allan, director of the Contemporary Art Department at Sotheby’s, explained, “Everybody had seen it and thought they’d get a bargain. I thought we’d have a terrific problem selling it. Psychology is quite important.”

Art dealer and major de Kooning collector, Allan Stone, put it another way: “The auction is a great place to sell but I’m not sure if it’s a great place to buy unless you really know what the hell you’re doing.”

More players have entered the contemporary arena, some of whom dropped out of the modern market due to a combination of scarcity of first-rate pictures and a glut of mediocre but expensive ones. “Collectors are selling their Picasso’s and Braque’s,” said Stone, “and buying de Kooning’s, Kline’s, Pollock’s and Gorky’s.”

Jeffrey Deitch, assistant vice-presi-dent at Citibank’s Art Advisory Depart-ment, observed, “The contemporary market has the biggest depth of interest. There is just not one player bidding against the reserve price. There are at least 30 collectors whom you would consider major players out there, vying for expensive pictures. A hundred more will attend one auction or another and buy something expensive.” 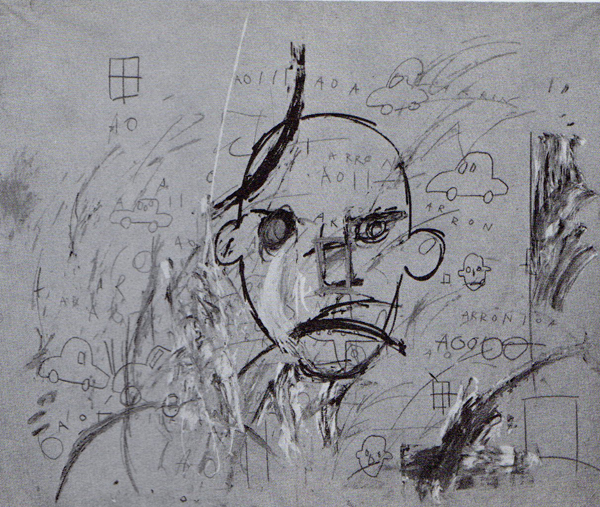 With the influx of new players, a batch of free-lance consultants have been hatched. “You have to be pretty good looking to get into it,” chuckled Allan Stone. “There’s a houseful of players who don’t know what to play on. That always surprises me. The wrong people have the money and are heavily advised. They should be collecting stamps.”

“At the middle levels,” noted Deitch, “there are people raising their hands that don’t know quite what they’re doing and that a better piece is available at a local gallery at half the price.”

But not all collectors comb the galleries month by month waiting for the best buy. “There are certain people,” continued Deitch, “big business people with tremendously busy schedules who pay more attention to auctions than to dealers. Dealers have to acknowledge that. The auction creates a certain discipline. You have to be there at a certain date and make a decision on the spot rather than drag it on for months.” A crop of young artists have stormed the auction ring with truckloads of figurative art. From Basquiat to Baselitz and Chia to Schnabel, the young ones have marched over the stripmined color fields and wrested the spotlight to their camp. “When I came into this business in 1978,” said Martha Baer, head of Christie’s Contemporary department and a senior vice-president “there wasn’t such a broad audience for art with so many painters out there and so much recent art being sold. The auction is not the best place for them to be sold,” continued Baer. “We’ve been offered paintings that were done last year. You have to be very careful about bringing in new artists so the auction price will meet or come close to the retail price. The market can get saturated. There can be an overkill.”

The biggest danger to the health of the contemporary market are greedy sellers asking for and getting inflated reserves from the auction houses. When more mediocre pictures enter the public forum and get hooted at, the market softens and eventually goes to pot. “It’s an inflation of expectation,” observed Deitch, “it happens every couple of years. The estimates keep creeping up resulting in lots of buy-ins” (when a picture doesn’t meet its reserve and returns to the seller). “Nobody’s going to pay $500,000 for a $300,000 picture.”

Well, that’s what the experts say. That the market is tight but buoyant. It has not gone crazy enough to swallow the $7,000-10,000 estimate at Sotheby’s for Jean-Michel Basquiat’s untitled oil and collage on the door of a battered Norge refrigerator. As Allan Stone says, “the nickel candy bar now costs 40 cents.” 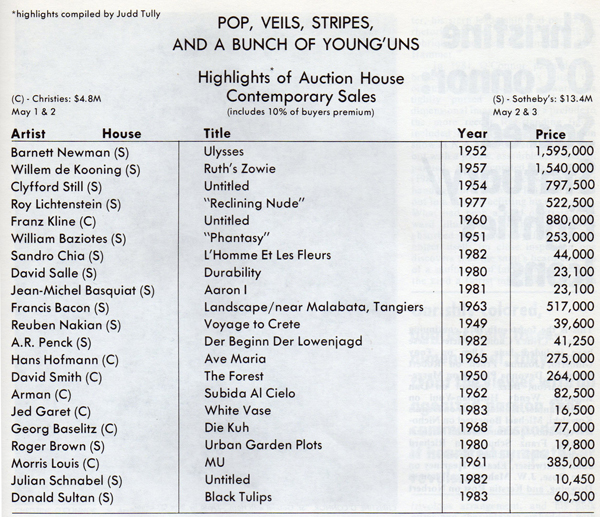