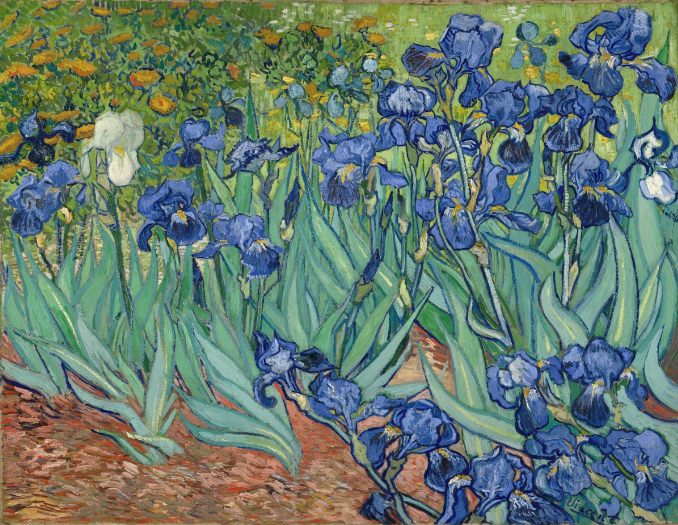 He looked like someone out of central casting, but Osamu Nakata was really the president of the Diamond Resort Corp. and he in fact bought two paintings by Joan Miro at Christie’s on the evening of Nov. 14 for $8.03 million, bringing along a TV crew to document the hotel magnate in his glory.

Through his interpreter, Nagata explained that it was only his second time buying art at auction and that he already owned 347 Picassos, 44 Chagalls, 20 Miros (not including the two new ones) and an unspecified number of Renoirs and Utrillos.

The surreal scene of the slight man in a powder-blue, three-piece denim suit holding up his auction catalogue with its Japanese translation under the glare of media lights matched the image of a global art market gone wild.

But Nagata proved to be an aberration of the now departed art boom, as evidenced by Sotheby’s and Christie’s wildly uneven two-week fall sales.

In the end, impressionist and modern artworks fared better than their younger brethren in the contemporary market, surprising no one. Each category took its lumps, with both houses ending up with stacks of unsold paintings and sculptures. They were returned to their owners in a collective state of disgrace.

In Sotheby’s case, the auction giant wound up owning 13 works from the estate of Henry Ford II since it had guaranteed — for undisclosed millions — the whole shebang of 36 artworks as a condition of the sale. The 13 spurned objects, ranging from a tiny seascape by Eugene Boudin to a large portrait by Amedeo Modigliani, carried a low-end pre-sale estimate of $23.4 million, quite a chunk of unsold canvas.

Sotheby’s, of course, can sell the art at some future date, assuming the market recovers sufficiently to absorb less than the highest quality work, but in the meantime, it must cold-storage the booty and listen to its shareholders scream.

Everybody talks about the Ford sale, what a failure it was and how Sotheby’s finally took it on the chin inits ferocious quest to dominate the auction market.

But neither Sotheby’s nor Christie’s is giving up guarantees as inducements to lure art-rich consignors, and neither house sounds contrite. “Yes, we’d consider it again,” said Christopher Burge, chief executive officer and president of Christie’s New York. “I don’t want to give Sotheby’s a competitive edge.”

Christie’s guaranteed three paintings from the Yaseen family collection during the recent round of sales and successfully sold them, including a Claude Monet from his epic waterlily series that snared $4.4 million (though it was significantly shy of its $6 million low estimate).

“We’ll continue to offer guarantees under the right circumstances,” said David Nash, fine arts director of Sotheby’s, “and obviously the level of guarantees will be very carefully calculated to be in line with market conditions. … I can tell you, seven times out of eight, we’ll make a lot of money out of them.”

During the boom of the late ’80s, art dealers, the so-called “retail trade,” had a hard time competing with the auction houses because, as Nash says, “it seemed like auction prices were going to reach up to the sky.”

“The auction houses won’t be able to tell somebody anymore, ‘Just put it at auction and it will go for a record.’ The results were far too dicey for that in the last two weeks,” said Larry Gagosian, the Madison Avenue super-dealer who bought a major load of contemporary works during the recent sales, including de Kooning’s “July” for $8.8 million at Christie’s.

Nash agreed that dealers suddenly had a leg up in the race to lure collectors. He gave the advantage to the “well-capitalized” dealer who could offer $6 million cash for a hypothetical Monet as opposed to the dealer taking the same painting on consignment for $8 million. Typically, Nash explained, the auction house would offer the same Monet for sale at $6 million to $8 million. “The guy who has cash will have a strong advantage,” said Nash, alluding to the new market. “It will make it slightly harder for us.”

Lawrence Rubin, president of M. Knoedler & Co., a major uptown gallery, disagrees. “The bulk of what will get sold by dealers in this new situation is certainly going to be sold by consignment,” he said.

Payson is far better known as the consignor of the world-famous “Irises” by van Gogh, which now resides — after a bumpy voyage — at the Getty Museum in Malibu. It sold for a stupendous and still controversial $53.9 million at Sotheby’s in November 1987, to the now financially adrift Australian tycoon Alan Bond. It is the third highest price achieved at auction for anything.

“Sellers,” said Payson, “will take a much closer look at private dealers. I think they’ll find the dealers will be able to offer as good or a better price than the auction houses estimate, especially when faced with the possibility of a large buy-in rate.”

Payson declined to say whether he would have held back “Irises” for sale and left it on the wall of the Joan Whitney Payson Gallery of Art at Westbrook College in Portland, Maine, if the market had been as queasy as the present one. He did point out that the picture would have been worth — at most — $5 million to $6 million in 1982, when the worldwide escalation of artwork started.

So where, exactly, is the art market headed and how can auction houses expect to attract first-rate material with so many caution lights flashing?

“As long as you don’t tweak the prices too high, it’s a healthy market,” insisted Christie’s Burge as he described a “nice Fernand Leger from 1919 that a hypothetical consignor bought in 1962 for $4,000” — not unlike the one that sold at Christie’s for $1.98 million on Nov. 14. “Yes,” he said, “you would certainly get more for it if you wait three or four years, but if you need the money this year” — and this is what the auction houses are counting on — “it’s probably the easiest way of actually finding this money. Selling your apartment would be a lot more difficult.

“We’re going to pay courtesy calls on all the old collectors,” he continued. “Bits and pieces will fall out of that … but we can’t go around creating obituaries.” Burge estimates that 30 to 40 percent of Christie’s business comes from estate sales.

Estates are ideal for an auction house since it doesn’t have to deal with balky consignors who might otherwise decide to keep the works on their walls if the prices aren’t right or, worse, take them to its arch-rival. “We’d like that percentage {of estate sales} to rise,” said Burge.

“A year ago you had the feeling you could put anything in the sale and it would bring over the high estimate no matter what the high estimate was,” said Nash of Sotheby’s. “What we get in May will depend on the financial needs of some collectors and the deaths of some important ones. These things are unpredictable.” Nash said that 70 of the 100 pictures offered in its evening impressionist-modern sales were from estates.

But other than oblige steep estate taxes (as in the recent mega-sale of Greta Garbo’s collection), what alternatives are left for living consignors with valuable artworks to dispose of in a downturning market? One option — just passed by Congress in an extraordinary measure introduced by Sen. Daniel Moynihan (D-N.Y.) — will allow the nation’s wealthiest taxpayers, who are also, historically, its biggest art collectors, a year-long window to deduct the full market value of donated works of art in 1991.

That vast picture window of museum donations was shattered in 1986 with the Tax Reform Act, virtually snuffing out the option among the mega-rich to give to museums. The new deal may turn out to be a cosmetic blip on the donation screen if the Treasury Department declines to allow this modification to “carry forward” these pricey deductions over a five-year period, as in the good old days, before 1986.

As John Whitney Payson says, “I can’t think of anybody in this country with a $50 million painting that could use the entire deduction in one year.”

“Because prices were rising at such a rate, people were tempted into the market to sell a picture, not really knowing what they were going to get for it,” commented Richard Oldenburg, director of the Museum of Modern Art. “Now, prices are somewhat more predictable and settled down, so someone can make a more rational choice: What will it cost me to give a picture to a museum or sell it at auction?”

Referring to the big chill of the 1986 Tax Reform Act, Oldenburg said, “You’d have to be a pretty philanthropic soul to completely forgo the difference between the cost of the painting and its current market value if you’re subject to that alternative minimum tax.”

MOMA’s uptown neighbor felt the brunt of that ratio during the height of the art boom. In a two-year period, the Metropolitan Museum of Art lost a cultural fortune from its walls. Paintings that had been on extended loan from potential donors were suddenly stripped away and sold at the highly profitable auction market.

There was van Gogh’s “Le Pont de Trinquetaille” from 1888, belonging to the estate of Siegfried Kramarsky, which sold at Christie’s London in June 1987 (five months before “Irises”) for $20.2 million. Last May another Kramarsky jewel, van Gogh’s magnificent portrait of “Dr. Gachet,” sold at Christie’s New York for $82.5 million to Japanese paper magnate Ryoei Saito.

Werner Kramarsky, the son of the late collector who bought “Dr. Gachet” in 1941 and who continues as trustee of the family estate, said, “My instinct — in order to get the best possible prices — would still have been to go to the auction market.” He said the change in the deduction law wouldn’t have made any difference with this particular picture.

Saito also purchased Renoir’s “At the Moulin de la Galette” at Sotheby’s the next evening for $78.1 million. The Renoir came from Betsey Cushing Whitney, the widow of John Hay Whitney, who had been a major donor to the National Gallery.

On that same night at Christie’s, the Met saw two other extended loan favorites disappear into the international anonymity of the auction market, with van Gogh’s “Autoportrait” from the Robert Lehman Collection (housed in a wing named after him at the Met) selling for $26.4 million and Edouard Manet’s “The Garden” fetching $16.5 million.

“What got me was the new owner of the ‘Gachet’ said he had admired it for so many years on the walls at the Met,” said William Luers, president of the Metropolitan Museum.

With dealers joyously nipping at the heels of Sotheby’s and Christie’s for plum property and museums positioning themselves once again as tax-protected repositories of donated art, what’s left for the auction houses?

“The thrust in the next season will be aimed at increasing our range of buyers and exploring new markets,” said Nash. Sotheby’s has opened new offices in Seoul and Berlin. “We’ll have more exhibitions in these places, as we do in Japan right now. It’s a number of small efforts.”