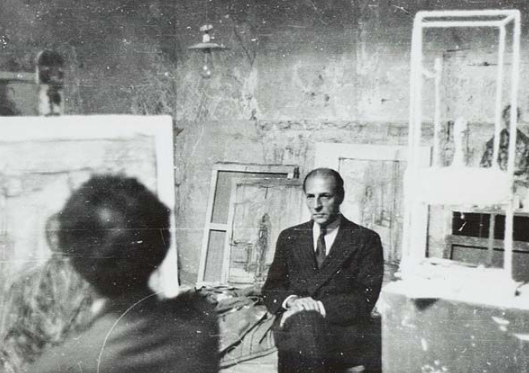 In an extraordinary art-world deal, a major international auction house and a powerful New York art gallery have jointly purchased the painting and sculpture inventory of the Pierre Matisse Gallery in New York for $142.8 million, the largest transaction of its kind.

Pierre Matisse, who died last August at the age of 89, was the son of the famous painter and a major force in the sale of modern works of art from his gallery on 57th Street. More than 2,300 works are represented in this unusual venture, including 20th-century modern masters from Joan Miro to Alberto Giacometti. There are no works in the inventory by his father, Henri Matisse, who had discouraged his son from entering the art business when he came to the United States in 1925. He wanted him, instead, to be a musician.

Sotheby’s will finance the transaction and art dealer William Acquavella will be the managing director of a new entity called Acquavella Modern Art.

“We will use a network of dealers worldwide and also use auctions to market the artworks,” said Acquavella in a phone interview. “I think it will take from three to five years. We’ll try to do it in an orderly fashion.”

Asked why he initiated the unprecedented step of joining forces with a major competitor, Acquavella answered, “It came about because of the size of the estate, the number of pictures, the enormous value, and the problems of marketing. The only sensible way was to get somebody like Sotheby’s involved. It was a good formula for us to make the best of a rather difficult but exciting situation.”

Normally, art dealers compete with auction houses for estates. Last year, for example, Acquavella reportedly offered $100 million to buy the pictures from the estate of Campbell Soup heir John T. Dorrance Jr. but lost out to Sotheby’s after the auction house guaranteed the sale of the paintings. They realized $116.18 million at auction in October. It is not unusual for dealers to pool funds to purchase works both privately and at auction. But the arrangement of an art gallery and an auction house merging to sell a block of artworks is virtually unheard of.

“It suddenly struck me — never in my wildest dreams — would I have expected to be in the back rooms of the Pierre Matisse Gallery flipping through pictures like library books,” said David Nash, a senior vice president of Sotheby’s. “Pierre Matisse was never anxious to sell the artists he represented and he accumulated an amazing inventory.” He characterized the deal as the “biggest private transaction that has ever been done in the art world.”

Nash would not speculate on how much the artworks will eventually fetch but said, “I can assure you we’ve looked at this with great care and it represents a tremendous profit potential. We have all the time in the world to do it. If the market isn’t strong during any particular time we can ride out the dips.”

The Matisse inventory breaks down to an average of $60,000 per artwork for the huge batch of paintings. According to both Nash and Acquavella, it will be some time before any work is sold either at auction or through galleries.

“It sounds like a smart move on Acquavella’s part,” said David Janis of the Sidney Janis Gallery. Janis said that in Europe dealers often sell works through auction houses.

However, in New York, dealers have been trying to counter the tremendous success of the auction houses by mounting annual art fairs of their own to gain a fatter share of the market.

Asked if the deal would spark other like partnerships, Janis, the grandson of the legendary dealer, responded, “I would imagine people will see more of this but I don’t think at this large of a scale. It’s a very risky proposition.”

Among the 61 or so artists represented in the cache are Marc Chagall, Yves Tanguy and Wifredo Lam. Many of these paintings were purchased directly from the artists’ studios by Matisse, who opened his gallery in New York in 1932. In a statement released by Sotheby’s today — the auction house is required to announce new ventures since it is a publicly traded company in both New York and London — Maria-Gaetana Matisse, widow of the dealer and an executor of his estate, said, “My husband had a lifelong association with most of his artists and was very concerned that the proper marketing of their work should continue after his death. We feel that the expertise of both Sotheby’s and Acquavella will be ideal to carry out my husband’s wishes.”

According to Sotheby’s Nash, a variety of tax consequences would have made it extremely disadvantageous to auction off the entire property. In addition, because some artists are represented with so many paintings, suddenly flooding the market with them could be disastrous to their prices.

“I hope Pierre Matisse would have been pleased,” remarked Acquavella. “I’m the managing partner of this venture and I can determine how things are sold and where and for how much. I’m going to treat the artists with care and reverence and make sure we don’t damage their market.”

Acquavella expects to mount exhibitions around the world with works from the inventory. Acquavella repeated a favorite phrase of Pierre Matisse: “My artists made me.”