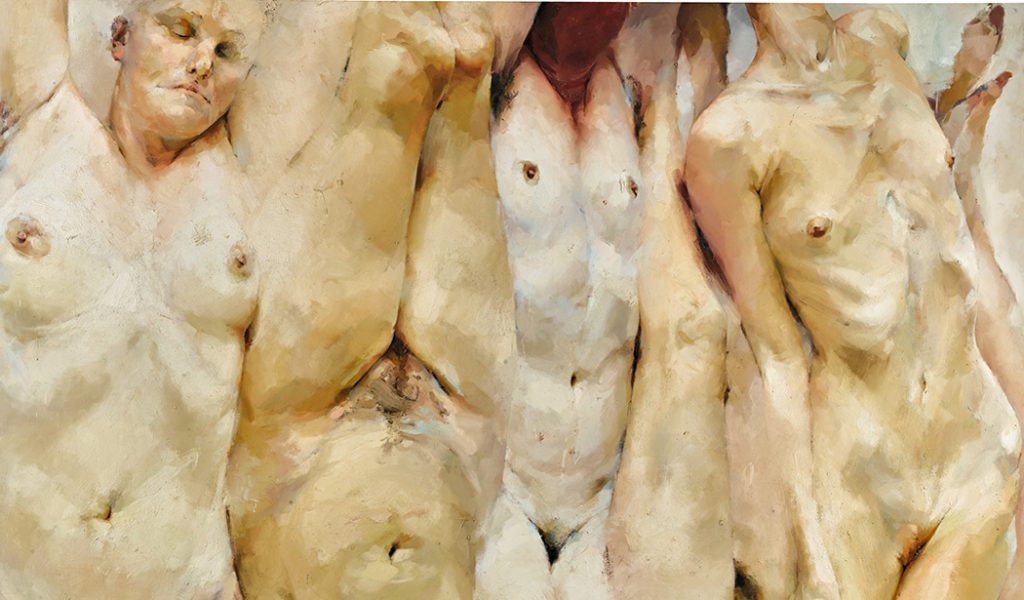 Showing that the contemporary art market in London can weather the early fallout from Brexit — and spurred in part by the weakened pound — Sotheby’s delivered a stunning result on Tuesday evening, taking in £52,194,000 ($69 million).

The sale contained several closely watched British entries (yes, everyone here is talking Brexit). Howard Hodgkin’s color-charged 1984-87 oil-on-wood abstraction “Portrait of the Artist” went for £653,000 ($868,000) against an estimate of £350,000 to £550,000 ($460-726,000) to a telephone bidder who beat out underbidder Larry Gagosian. Frank Auerbach’s 1989-90 expressionist oil-on-canvas cityscape “Mornington Crescent-First Light” failed to sell at a chandelier bid £1.1 million against an estimate of £1.2 million to £1.8 million ($1.6-2.4 million). The Auerbach came armed with a Sotheby’s guarantee, meaning the seller was assured a minimum price no matter what happened in the salesroom. In this instance, the house became the owner.

Former YBA (Young British Artist) star Jenny Saville was represented by one of the largest paintings in the sale, the 30-by-130-inch “Shift,” from 1996-97, depicting six seemingly vacuum-packed, right-side-up and upside-down nude female figures. It had been exhibited in the storied and groundbreaking “Sensation: Young British Artists from the Saatichi Collection” at the Royal Academy in 1997 and sold tonight to the Long Museum in Shanghai for £6,813,000 ($9 million) against an estimate of £1.5 million to £2 million ($2-2.6 million). Bidding opened at £1.1 million and quickly escalated, thanks to three competitors on the telephone who were joined by Larry Gagosian, also taking bids on his cell phone. The winning bid, taken by Sotheby’s Hong Kong specialist Jen Hua, was met with thunderous applause in the New Bond Street salesroom as an unmistakable sign that the market here, Post-Brexit, was still alive and well. The price achieved shattered the record set by the artist’s 1993 “Plan” at Christie’s London in February 2014, which sold for £2,098,500 ($3.5 million). “Shift” now boasts the third-highest price for a work by a woman artist at a Sotheby’s sale, as well as the second-highest for a living woman artist at auction. The record is held by Cady Noland’s “Bluewal,” which sold for $9.8 million at Christie’s New York in May 2015. At the Long Museum, the Saville will be in grand company, including Amedeo Modigliani’s 1917-18 “Nu couché,” bought at Christie’s New York in November 2015 for an artist record $170.4 million.

Keith Haring’s large and late acrylic and enamel on canvas “The Last Rain Forest,” from 1989, brought an artist record £4,181,000 ($5.5 million) against an estimate of £2 million to £3 million ($2.64-3.96 million). After being diagnosed with AIDS, Haring asked his dealer, Tony Shafrazi, for 100 canvases but completed only three, including this one, before his death in February 1990 at age 31. The seller was famed photographer David LaChapelle, who acquired the painting in 2001. Amy Cappellazzo, Sotheby’s co-chairman of the global fine art division, took the winning bid.

The shockingly successful evening included several other high-value lots. Among them, Rudolf Stingel’s huge and ornamental 2012 oil and enamel on canvas “Untitled,” part of his ongoing carpet-painting series, made £1,745,000 ($2.3 million) against an estimate of £1.5 million to £2 million ($2-2.6 million). More impressive still, Sigmar Polke’s wildly experimental and epic 121¼-by-160½-inch 1992 “Roter Fisch (Red Fish),” in acrylic on found woven fabric, sold on a single bid to an Asian telephone bidder for £3,117,000 ($4.2 million) against an estimate of £3.5 million to £4.5 million ($4.6-5.9 million). A central motif of the composition is an appropriated passage from a 16th-century drawing by Pieter Bruegel the Elder of figures on a ladder. The painting was exhibited last year in New York in Nahmad Contemporary’s “Threads of Metamorphosis: Fabric Pictures by Sigmar Polke.”

The sale did not contain many blue-chip post-war entries. Among the few offered, Andy Warhol’s 1964 20-by-16-inch “Jackie,” depicting the glamorous First Lady in a pillbox hat, smiling and partly obscuring the profile of President Kennedy smiling behind her, brought £1,445,000 ($1.9 million) against an estimate of £1.2 million to £1.8 million ($1.6-2.4 million). The image was taken from a photograph shot in Dallas on the day Kennedy was assassinated and probably represents one of the last images of the duo’s “Camelot” era. The painting last sold at auction at Christie’s Los Angeles in October 1998 for a mere $90,500.

A second Warhol, the siren-like “Four Marilyns (Reversal Series),” in acrylic and silkscreen ink on canvas and dated 1979-86, brought a stunning £2,893,000 ($3.8 million) against an estimate of £1.8 million to £2.5 million ($2.4-3.3 million). Seemingly fresh to market, it last sold at Sotheby’s New York in May 1999 for $299,500. Marc Gardner, a Detroit collector, was the underbidder. Buttonholed after the sale and asked why he stopped bidding, Gardner answered, “What a great question! It’s because the advice I received was to stop at a certain point, and I’m pretty disciplined.” He noted that the bidding was going like a long point at Wimbledon and added that he had been successful earlier, at the Phillips day sale, buying a 2011 Damien Hirst tondo painting: “In the NBA, I’d be shooting 500.”

A trio of Jean Dubuffets was also on offer. Among them was the cover lot, the 1959 oil and collage on canvas “Barbe de Lumière des Aveuglés (Beard of Blinding Light).” Strong bidding drove it to £3,173,000 ($4.2 million) against an estimate of £1.2 million to £1.8 million ($1.6-2.4 million). Included in the 1973 Guggenheim and Grand Palais retrospective, the painting is part of the artist’s acclaimed “Barbe” series, conveying an interwoven sense of the antique and the modern.

“London continues to be a very vibrant hub for the international art market,” said Alex Branczik, Sotheby’s head of contemporary art, Europe. Going by tonight’s action, that certainly seems to be the case.