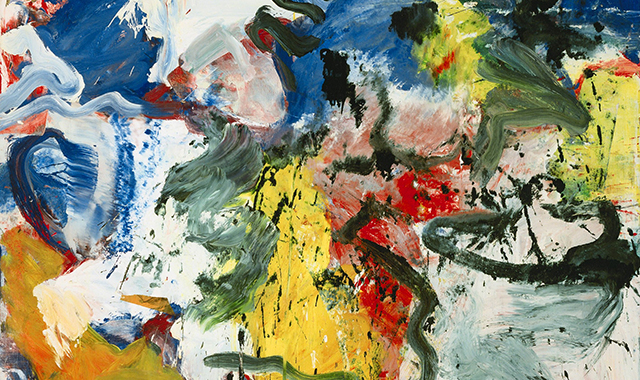 NEW YORK — A Willem de Kooning painting belonging to a rare and celebrated series from 1975, “Untitled V,” will head to the auction block at Sotheby’s in November. Estimated at $25-35 million, this work has not been seen in public since 1980.

First acquired by London dealer Anthony d’Offay when purchased from Xavier Fourcade Gallery in 1987, and subsequently sold to its current owner in 1989, the painting is both large-scale and rich in color: suffused with blazing hues of reds and yellows balanced by cooler blues and creamy whites, scaled at 70 by 80 inches.

Its debut at the Fourcade Droll Gallery in New York during the year it was created was one in a group of 20 paintings that had been completed in an explosive period of just six months, following an extended time in which the artist had abstained from painting, and delved instead into sculpture. It is understood that the primary original market for this series, when the works were first shown, was approximately $100,000.

“I made those paintings one after the other, no trouble at all,” de Kooning explained, looking back on that period in a 1981 interview, then aged 71. “I couldn’t miss.”

During what was a short-lived, but electric time in his career, the heavily loaded brushes and sharp palette knives the artist used to carve out his layered paintings enabled him to convey the shimmering light, water, and sky of his East Hampton location. Writing about the original Fourcade exhibition, New York art critic Dore Ashton observed, “In short, he offers a distinct, a unique realm in which imagination prevails.”

Other paintings from the acclaimed series have appeared at auction, including “Untitled XVI” (also from 1975 and identically scaled), which sold to L&M Arts for $15,696,000 (est. $6.5-8.5 million) at Sotheby’s New York in May 2006, underbid by New York private dealer Abigail Asher.

The auction record for any de Kooning work was achieved at Christie’s New York in November 2006, when his slightly later “Untitled XXV” (1977) sold for $27,120,000 to New York dealer Nicholas Maclean (unpublished estimate). This was the highest price for a Post-War work at the time.

“When you look at the MoMA retrospective,” said Robert Mnuchin, referencing a blockbuster de Kooning show organized by John Elderfield in 2011-2012, “and the room that had those pictures from the 1970’s, it really heightened the awareness of how the top pictures from that period are very major pictures in his career.”

“Untitled V” did not appear in that exhibition, of course, but two other paintings from the 1975 group — including “Screams of Children Come from the Seagulls” from the Glenstone collection and “Untitled VI” from the Art Institute of Chicago — were featured in the retrospective.

As de Kooning himself remarked about those paintings from 1975, “It’s like a man at a gambling table (who) feels that he can’t lose. But when he walks away with all the dough, he knows he can’t do that again.”

“Untitled V” will be unveiled at Sotheby’s London headquarters on New Bond Street this Saturday as a preview of the November 13 evening auction in New York.

“The unveiling of ‘Untitled V’ and the other Fourcade gallery exhibition paintings in the autumn of 1975, marked the renaissance of Willem de Kooning,” said Tobias Meyer, worldwide head of contemporary art at Sotheby’s. “Today, the force of the work is as powerful and affecting as it was 40 years ago.”