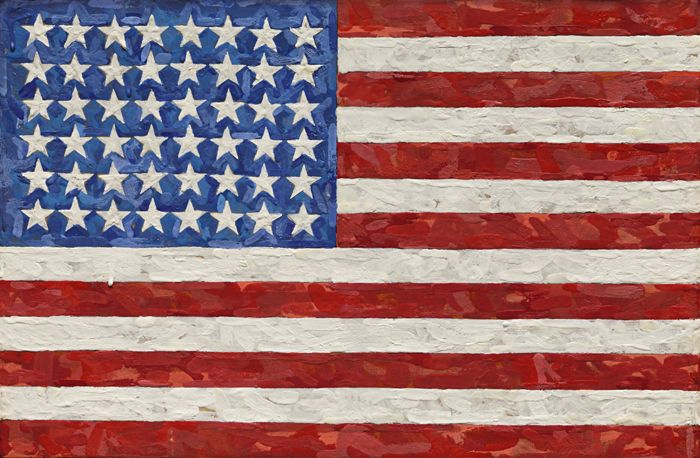 Though hobbled by a few expensive guarantees that flopped, Sotheby’s contemporary art sale on Tuesday brought respectable and at times high-octane results, with a final tally of $343,621,000.

Only eleven of the 78 lots offered failed to find buyers, for a trim buy-in rate by lot of 14 percent, and the total exceeded the low-end of pre-sale expectations, which ranged from $323.1-418.65 million. (Estimates reflect hammer prices and don’t include buyer premium charges pegged at 25 percent of the hammer price up to and including $100,000, 20 percent up to and including $2 million and 12 percent for anything above that.)

Fifty-three of the 67 works that sold made over a million dollars and of those, seven exceeded ten million. More importantly, four artist records were set. The night’s results easily vanquished those of the equivalent sale last November, when Sotheby’s made $293.6 million and the buy-in rate was 17 percent by lot. Historically speaking, it was the auction house’s fifth highest total for a contemporary sale.

Sotheby’s had insured at least a partially successful evening by directly guaranteeing 29 of the 78 lots on offer for undisclosed prices, assumed for the most part to be close to the lower end of pre-sale estimates.

The long evening got off to a torrid start with Glenn Ligon’s all-over white, 80-by-30-inch text based painting on panel “Untitled (I was Somebody)” from 1990/2003, which brought a record $3.973,000 (est. $1-1.5 million). The work, a wall relief appropriating a 1950s text by civil rights activist Reverend William Holmes Borders, was included in the artist’s acclaimed traveling retrospective, “Glenn Ligon: America” in 2012. It was backed by a Sotheby’s guarantee, making it a big money maker for the house.

The next lot, Mark Grotjahn’s large-scaled abstraction, “Untitled (Grey White and Yellow lined over Blue Green Face 809)” from 2009, carried a so-called Irrevocable Bid, meaning a third party backer had pledged a minimum bid on the lot, assuring its sale. It sold to an anonymous telephone bidder for $4,645,000 (est. $4-6 million).

The irrevocable bid armor also protected Louise Bourgeois’s creepy bronze “Spider 1” from 1995, part of an edition of six plus one artist’s proof, which sold to another telephone for a toppy $7,109,000 (est. $4-6 million). (Based on the catalogue and statements made by auctioneer Oliver Barker during the sale, there appeared to be seven irrevocable bids, bringing the overall number of guarantees to 36.)

The first of the $10 million-plus lots appeared early in the sale: Gerhard Richter’s square-format oil on canvas “Abstraktes Bild (747-4)” from 1991. Suggesting a streaked and smeared rushing river of red paint, it sold to an unidentified Asian bidder in the salesroom for $21,445,000 (est. $15-20 million).

In sharp contrast, at least size wise, Jasper Johns’ 11 ½-by-17 ½-inch “Flag” from 1983, executed in encaustic on silk flag on canvas and reprised from his epoch-making series of the mid-1950s, fetched a record-smashing $36,005,000 ($15-20 million). At least five bidders chased the prize, including New York private art advisors Ruth/Catone and New York collector Donald Bryant.

Another guaranteed lot was Robert Ryman’s frothy and thickly impastoed abstraction “Untitled” from 1961 and domestically scaled at 48 ¾ by 48 3/4 inches, sold to New York dealer Dominque Levy for $15,005,000 (est. $15-20 million). Ringside observers said they had expected more action on the Ryman.

“I think there’s buyer fatigue, to be honest,” said Skarlet Smatana, curator of the Athens-based George Economou Collection. “It’s only so long that you can go at these levels.”

A large and late Willem de Kooning oil, “Untitled II” from 1986, comprised of loopy, color-charged lines that amble across the canvas, realized a rather tepid $6,661,000 (est. $6-8 million). New York dealer Robert Mnuchin was the underbidder on the work, which had been included in the important de Kooning “Late Paintings, The 1980’s” traveling exhibition at the Museum of Modern Art and other institutions in 1995-97,

The painting also carried a so-called irrevocable bid, giving the anonymous backer compensation based on the hammer price as long as that backer was not the actual buyer.

In keeping with the results of Monday evening’s overachieving $158.7 million sale from the Rachel “Bunny” Mellon collection, Abstract Expressionism played a starring role on Tuesday, especially works by Mark Rothko, the tragic king of that era.

In Tuesday’s line-up, Rothko’s cover lot, the luscious and otherworldly composition “No. 21 (Red, Brown, Black and Orange)” from 1951, provoked a long bidding battle and finally sold to a telephone bidder for the top lot price of $44,965,000 (unpublished estimate in the $35-50 million range). The stunning yet serene painting, the crown jewel of Pierre and Sao Schlumberger collection, measures a trophy-sized 95 by 64 inches. It was first publicly exhibited at the Museum of Modern Art’s trailblazing group of shows “15 Americans” in 1952, the year after it was made. It has been out of public view since a European exhibition organized by the Kunsthaus Zurich in 1971-72.

It now ranks as the eighth most expensive Rothko at auction.

Almost defying any category, apart from masterful, Alexander Calder’s brilliant and joyous hanging mobile in painted sheet metal and wire, “The Blue Comb (Le peigne bleu)” from 1959, just got by at $4,645,00 (est. $4-6 million).

In the Pop Art arena, Andy Warhol accounted for nine entries, led by the stunning and early “Liz #3 (Early Colored Liz)” from 1963, featuring the cropped head of the screen goddess with turquoise eye shadow and ruby red lips, set against a light green background; it sold to a telephone bidder for $31,525,000 (unpublished estimate in the region of $30 million). The 40-by-40 inch canvas is one of six Early Liz portraits on monochrome backgrounds, and ranks now as the highest valued work of that silkscreened litter.

It was a different story for Warhol’s 22-by-28-inch, yellow-gold “Little Electric Chair” from 1964, glowing in fluorescent paint and silkscreen. The guaranteed painting failed to sell at $6.8 million and became the unwanted property of Sotheby’s (est. $7.5-9.5 million).

Yet another Warhol entry, the super-sexy, blue-tinted “Brigitte Bardot” from 1974, sold to another telephone bidder for $11,645,000 (est. $10-15 million). The image, commissioned by playboy Gunther Sachs, who was once married to the starlet, was poached from a Richard Avedon portrait from 1959.

The auction ran the gamut of blue chip styles and dates, with a number of strong examples from the 1980s, including Jean-Michel Basquiat’s early “Untitled” work from 1983, in marker with oil stick and acrylic on paper, featuring a red-figured male bearing a sword and what looks like a slice of pepperoni pizza by his groin. It sold for $3,917,000 (est. $3-4 million).

Another Basquiat, “Untitled” from 1987, painted a year before his death from an overdose at age 27 and featuring a speeding red car apparently out of control, sold for $5,765,000 (est. $6-8 million). The large, seemingly autobiographical work—Basquiat was hit by a car and seriously injured as a boy—now appears to foreshadow of worse things to come. It had last sold at Sotheby’s London in June 2007 for £1.2/$2.5 million.

Another high-priced casualty of the long evening was Jeff Koons’ baroque, jumbo-scaled, and perfectly mirrored “Moon (Yellow)” from 1995-2000, which was guaranteed and flopped at a chandelier bid $11.5 million (est. $12-18 million).

“We take risks,” said Alex Rotter, Sotheby’s worldwide co-head of contemporary art in post sale commentary. “We take guarantees on works we believe in in. We have expertise, we believe in Jeff Koons, but it was not his evening. We just couldn’t find the right home for it, but we will.”

With so much high-priced material on offer, there was little room for works by younger art stars, though Wade Guyton’s “Untitled” Epson inkjet printer-generated diptych from 2010 certainly brought back memories of his earlier days at more modest price points. The guaranteed diptych realized $4,085,000 (est. $4-6 million).

“I feel very poor tonight,” said Nicolo Cardi, the Milan-based dealer who underbid an Alexander Calder stabile and a John Chamberlain sculpture. “But the market is very super safe and solid for collectors to buy this art. It’s a real market.”

The evening action resumes at Christie’s Wednesday evening with confident expectations of a record-breaking night.