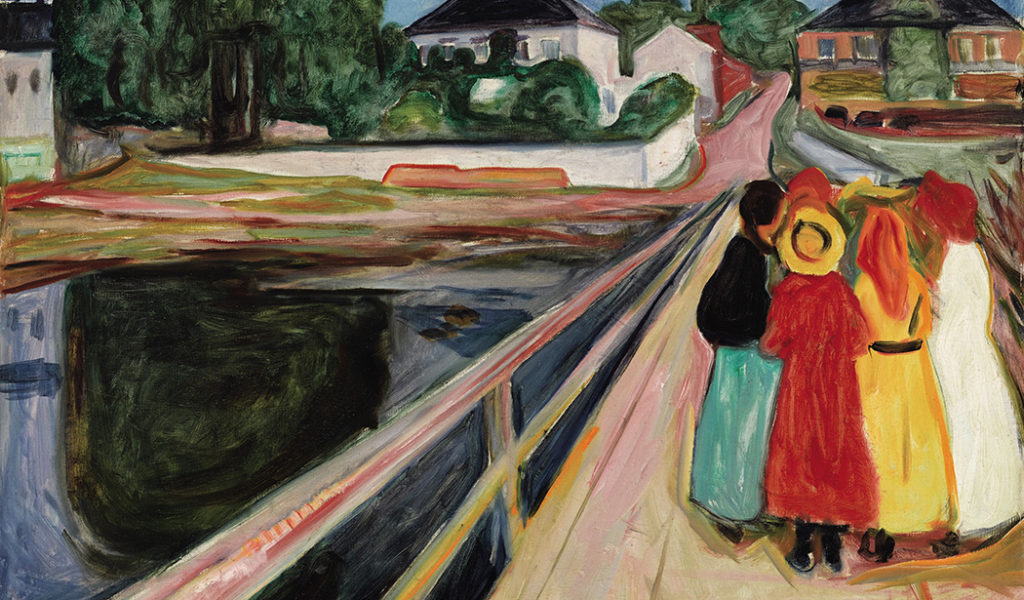 The anxiously awaited, post-election auction season of blue chip art opened with a mild bang at Sotheby’s on Monday evening with Impressionist and Modern Art fetching $157,714,750.

Eight of the 42 lots offered failed to sell for a respectable buy-in rate by lot of 19 percent.

That figure, however, was far below last November’s $306.7 million result for the 36 lots that sold.

Still, twenty-nine of the 34 lots that sold made more than one million dollars and of those, two eclipsed the $10 million mark.

One artist record was set.

On the more obscure side, at least for a work in an evening sale, Frantisek Kupka’s widely exhibited and boldly Modern abstraction, crisply comprised of vertical bands of color, “La Forme du bleu” from 1924, hit $2,172,500 (est. $1.5-2 million). New York art advisor Mary Hoeveler was the underbidder.

Last viewed at the still-traveling Moholy-Nagy retrospective that made a recent stop at the Guggenheim Museum before it was yanked for the market, it was one of three enamel works executed in that way and the only example still in private hands.

“It’s a piece we sold to a very important collector in the ‘80s,” said the dealer as he exited the salesroom, “and it’s even daring in today’s world, even for the contemporary market.”

Rastorfer declined to identify the client or country he was bidding on behalf of, only saying cautiously, “it went to a very important situation.”

A second and larger Matisse oil from Nice, “Femme en bleu a table, fond rouge” from 1923, featuring a fully dressed model with her arms patiently folded and set against a brilliant red saturated background, failed to sell at a chandelier bid $4.2 million (est. $5-7 million).

It was the priciest casualty of the evening, though hardly surprising given its aggressive estimate.

Color-charged works seemed to attract the most interest as evidenced by Maurice de Vlaminck’s Fauve-period landscape, “Le Verger” from 1906, blazing in summer colors, sold to another anonymous telephone bidder for $7,550,000 (est. $7-10 million). It last sold at Sotheby’s London in June 2006 for £2.36/$4.3 million.

Though appearing rather dark in reproduction, Vincent van Gogh’s richly painted and evocatively haunting “Nature morte: vase aux glaieuls” in oil on board and laid down on canvas, from 1886, during a brief period when van Gogh was living in Paris, sold for $5,862,500 (est. $5-7 million).

It was last offered at Sotheby’s London in June 2002, when it bought in against a £900,000-1.2 million estimate, and this time comes to market bearing a Sotheby’s guarantee, one of only three in the auction. On Monday, it seemingly sold to the irrevocable bidder, since no other bids materialized in the sleepy room.

The 51 by 63 ¾ inch Picasso was offered by the estate of New York collector Joan Oestreich Kend and was backed by a so-called “irrevocable bid,” meaning a third party had promised to bid an undisclosed amount sufficient to reach the guarantee. That third party, if the sale is successful, receives a fixed fee that can be applied to the purchase price and is reflected here in the less chunky tally. If it’s unsuccessful, the irrevocable bidder also profits, based on an undisclosed compensation related to the final hammer price.

The small print on page 200 at the back of the auction catalogue explains the irrevocable bid concept, though a law degree would help in deciphering the language.

The evening’s sole star was the cover lot, Edvard Munch’s “Pikene pa broen (Girls on the Bridge” from 1902, featuring a cabal-like group of huddled women standing on a jetty and outfitted in colorful dress, their backs turned to the viewer. It went for $54,487,500 (unpublished estimate in excess of $50 million).

Munch painted a dozen versions of the composition and only two, including this one, remain in private hands.

The painting set an auction record for the artist each time it has been offered in the past, but it came up short this time, going again to an irrevocable bidder.

No amount of prodding by auctioneer Helena Newman could enthuse the silent salesroom, despite her repetitive pleas, “I can bring the hammer down at $50 million.” That became the hammer price before adjusted fees.

“It’s a very smart buy,” said Hobart as he departed the salesroom. “It’s from an edition of two with no artist proofs. I’m very pleased with it.”

Rounding out the mostly tame yet mildly successful evening, a large-scale and multi-figured Paul Delvaux painting, “La Route de Rome” from 1979, busy with seated and standing female nudes and deaccessioned by the Foundation Paul Delvaux Museum in Belgium, sold for $2,652,500 (est. $2-3 million).

Another figurative offering, one with a Cubist twist, Lyonel Feininger’s “Raddampfer am Landungssteg (Side-Wheel Steamer at the Landing)” from 1912, which went to yet another telephone bidder for $4,456,250 (est. $4-6 million).

At one time it was in the inventory of world-class Dutch collector/dealer Jacques Goudstikker before it was “Aryanised” by a Nazi fronted gallery in Amsterdam in circa 1940. It last sold at Sotheby’s London in February 2011 for £3.1/$5.1 million, a loss for the seller.

It was a timely offering, given that Picabia will be featured in a retrospective at the Museum of Modern Art opening on the 21st.

“It wasn’t a great sale,” said Guy Jennings, managing director of the London based Fine Art Fund. “But they managed to sell most of it.”

The evening action resumes on Tuesday at arch-rival Christie’s with a sale of Post-War and Contemporary Art.