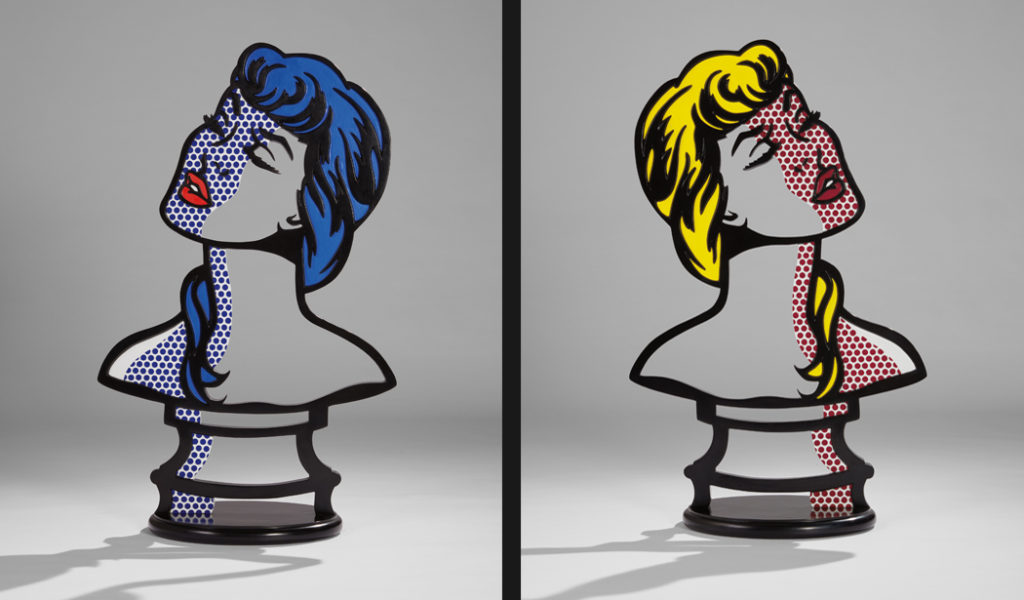 Roy Lichtenstein’s “Woman: Sunlight, Moonlight,” 1996, will be offered at Phillips’ May 18 evening sale of 20th Century and Contemporary Art in New York.(Phillips)

Hard-charging Phillips has pulled off an art market coup, ARTINFO has learned, winning a rare-to-market Roy Lichtenstein sculpture, “Woman: Sunlight, Moonlight” from 1996, for its May 18 evening sale of 20th Century and Contemporary Art in New York.

Estimated in excess of $10 million, the two-sided, polychrome portrait bust in painted and patinated bronze of a pony-tailed, Ben-Day dot-shaded beauty hails from the Roy Lichtenstein Foundation; this is the first time that 18-year-old organization has sold a work from its slim inventory at auction.

Proceeds from the sale will benefit the foundation’s various study center projects.

The record for a Lichtenstein sculpture stands at $5.4 million, set at Phillips de Pury in May 2012 by an outdoor-scaled, 144 inch-high “Brushstroke Nude” from 1993 in painted cast aluminum.

Another “Woman: Sunlight, Moonlight” — cast from the same edition of six for which the new-to-market one served as the artist proof — drew four bidders at Sotheby’s New York in November 2003, and sold to Larry Gagosian for $2,136,000, a record for a Lichtenstein sculpture at the time.

Gagosian bought the 40 inch-high work on behalf of Eli Broad, and the sculpture remains in the Broad Collection.

“Historically, we’ve not been keen to go to auction,” said Jack Cowart, founding executive director of the Roy Lichtenstein Foundation, in a telephone interview. “But it seemed like a good plan at this time for a number of reasons, and will facilitate our expanded public programs.”

Asked if the consignment was competitive, Cowart chuckled. “No, it was suggested to us by Phillips,” he said. “They came in with a point-specific request and presented a persuasive argument. It took all of ten days and was a clarifying moment for us. We didn’t put it up for ‘bid.’ Like Roy, we don’t play the market.”

Scott Nussbaum, Phillips head of 20th Century & Contemporary Art in New York, led the charge for the sculpture. “We are delighted that the Roy Lichtenstein Foundation has entrusted us with the sale of this extraordinary work of art,” he said by phone. “This is one of his greatest sculptures, and it’s a coup for Phillips to be working with such a distinguished consignor.”

He added, “we have very high expectations for it.”

Last November, Phillips sold Lichtenstein’s “Nudes in Mirror” from 1994 for $21,530,000, after the painting had been slashed four times by a deranged, knife-wielding museumgoer at Austria’s Kunsthaus Bregenz in 2005 and then expertly restored. It was the fourth Lichtenstein nude on canvas from that late series to sell for over $20 million at auction.

“We were devastated when that happened to the work,” recalled Cowart who had arranged for that particular museum loan. The sale of “Nudes in Mirror,” at Phillips “may have set the stage” for this upcoming sale, according to Cowart. “It was a connective thought.”

The foundation retains two maquettes of the two-sided sculpture, part of its renowned study collection.

“We’re very enthusiastic about Lichtenstein as a sculptor,” said Cowart.