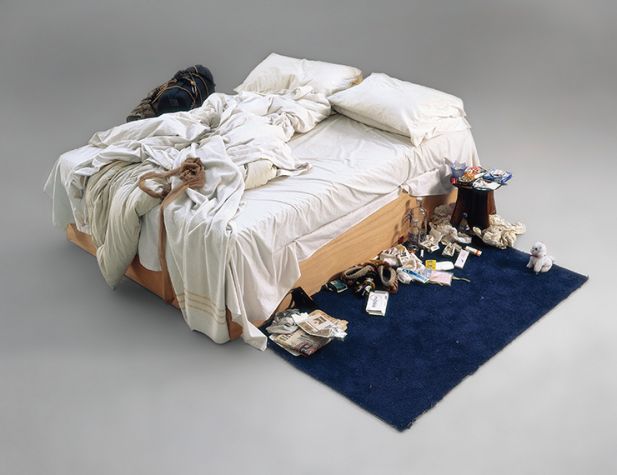 LONDON — Despite a chronic fatigue generated by a seemingly endless half year of art fairs and auctions, the Post-War/contemporary art market surprisingly shifted into overdrive at Christie’s jam-packed salesroom Tuesday evening, realizing £99,413,500/$169,897,672. The result landed healthily midway between pre-sale expectations of £78.9-114.8/$134.9-196.3 million.

Twenty-nine lots sold for over one million pounds and 38 made over one million dollars. Seven artist records were set, including two just 24 hours old. The tally hurdled past last June’s £70.2/$108.4 million result for 51 lots sold with a 20 percent buy-in rate by lot.

An amalgam of Italian offerings soon followed with (lot 4) Michelangelo Pistoletto’s mirror painting/self-portrait, “Amanti (Lovers)” from 1962-66, executed in painted tissue-paper on stainless steel, which sold for a record £2,322,500/$3,969,153 (est. £1-1.5 million). Milan dealer Nicolo Cardi and collector Dimitri Mavromatis were part of the posse of underbidders.

One of the gentlemen is Doig, disguised in a theatrical costume and set against a fantastic evening landscape, resembling stoned runaways from the Sgt. Pepper’s Lonely Hearts Club Band. The background is based on a found German postcard from circa 1910. It shattered the 24-hour-old record set at Sotheby’s on Monday evening when “Country-rock (wing-mirror)” from 1999 sold for £8,482,500/$14,432,974.

“It’s one of three self-portraits that exist,” said Skarlet Smatana, the curator for the Athens-based George Economou Collection and the underbidder on the painting. “I can understand the value and the interest.”

“We bid on the Hurvin Anderson,” said Guy Jennings, managing director of the London-based Fine Art Fund and a former top Impressionist and Modern specialist at Christie’s, “and thought we were brave [bidding] at £600,000.”

Jennings described the difference between the two evenings at Sotheby’s and Christie’s this way: “Christie’s seemed to have a little bit of fairy dust that eluded Sotheby’s.”

Jopling had better luck with another Saatchi offering, easily the most scandalous of the week as Tracey Emin’s gritty, indeed filthy and alcohol perfumed tableau/self-portrait, “My Bed” from 1998, including stained mattress, linens, pillows, and objects one doesn’t care to mention in a PG-rated, setting sold to the dealer for a record smashing £2,546,500/$4,351,969 (est. £800,000-1.2 million). Emin, who helped stage the piece at Christie’s, was in the audience, videotaping the bidding on her iPhone and looking more excited as the bids kept coming. The widely exhibited and written about bed is one of the iconic pieces of the bygone YBA era. It is understood that Saatchi acquired it from the Lehmann Maupin Gallery in New York in 2000 for approximately £150,000.

Apart from the Emin sensation, a guaranteed work by Francis Bacon from the estate of Roald Dahl, the extraordinary English author and creator of the Willy Wonka Chocolate Factory tale, attracted another flash flood of bidding.

Bacon’s cover lot (lot 16) “Study for Head of Lucian Freud,” a 14 by 12 inch oil on canvas from 1967, presenting the figurative painter’s head almost unrecognizable in its explosive fury of thick brushstrokes, sold to someone standing at the very back of the sardine squashed salesroom for a hefty and top lot £11,506,500/$19,664,500 (est. in the region of £8-12 million). Dahl acquired it from the Marlborough Gallery that same year for £2,750 and lived with it until his death in 1990.

There are only two single canvas portraits of Freud, Bacon’s one-time close friend — they met in 1945 — and later estranged rival in Bacon’s oeuvre. The other resides in a private collection. Dahl eventually acquired four and possibly more Bacon works, and this portrait is the only one left in the estate. The two men of arts and letters, who apparently only met in passing, were much alike in their high-life taste for tobacco, drinking, and gambling.

Warhol’s good friend and sometime collaborator, Jean-Michel Basquiat, was represented with a late, intensely busy graphic work, (lot 35) “Toxic” from 1984, scaled at 86 and 68 7/8 inches. It sold to Connecticut collector and art dealer David Rogath for £1,650,500/$2,820,705 (est. £1.2-1.8 million). The title refers to the artist’s close, club-going friend who is featured in the center of the canvas with brown arms and red hands raised high and wearing a blue broad brimmed hat.

Buttonholed outside the King Street salesroom on a balmy, still light night, Rogath observed, “I just thought it was so underpriced and liked it much better than the one that sold last night for a higher price. I was prepared to go much higher.” Rogath characterized Christie’s as an “excellent result.”

Formerly in the Mugrabi collection, the acrylic oil stick and Xerox collage on canvas last sold at auction in Paris in June 1999 in the pre-Euro era for $343,385.

Though not records, two other works showed the brawny strength of the current market as (lot 37) David Ostrowski’s “F (Dann lieber nein)” abstraction in oil and lacquer on canvas from 2011 unleashed a torrent of phone bidding, selling for £104,500/$178,591 and (lot 11) Roy Lichtenstein’s rare to market, tondo shaped canvas, “Mirror #8” in oil and Magna on canvas from 1971, sold to a telephone bidder for £1,986,500/$3,394,929. Larry Gagosian and private art advisor Amy Cappellazzo were part of the roster of underbidders.

The evening action resumes for a finale of the season at Phillips on Wednesday.