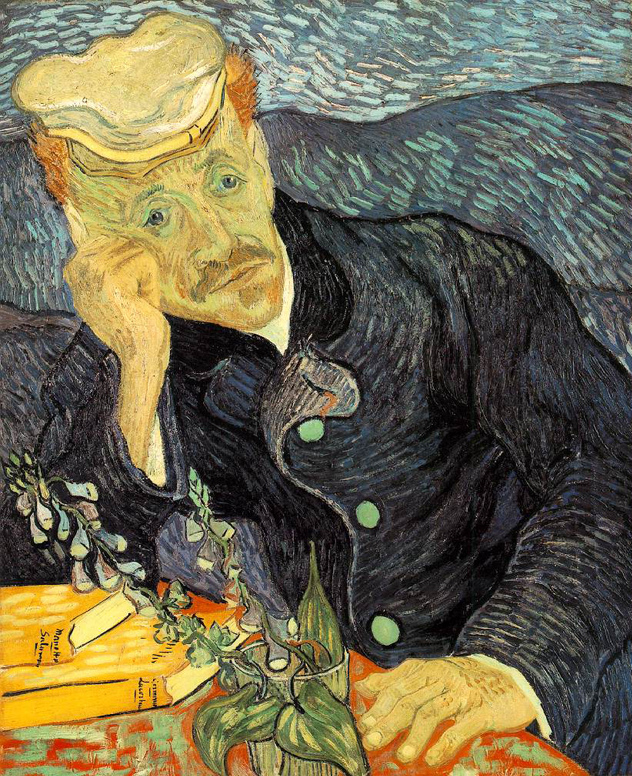 Van Gogh’s “Portrait of Dr. Gachet” was sold to a Japanese Gallery for $82.5 million.

Bidding began at $20 million and quickly jumped skyward in million-dollar increments. The numbers kept escalating as new bidders entered the competition, including Hideto Kobayashi, head of the Kobayashi Gallery of Tokyo, who ultimately raised his hand for the winning bid.

The room burst into sustained applause at the climactic hammer price of $75 million, recognized by Christopher Burge, the auctioneer and chief executive officer of Christie’s New York. The final price of $82.5 million included the standard 10 percent buyer’s premium.

Recognizing the tumultuous applause, the new owner of the 1890 painting, which is in pristine condition, broke into a broad and satisfied smile.

Reached in Washington, Werner Kramarsky, son of Siegfried Kramarsky, the late owner of the painting, said, “I’m not overwhelmed. Surprised? Yes. But it is a painting certainly worth being one of the most sought after in the world.” Kramarsky added, “The fact that it is leaving the United States is certainly a sad thing. We hope that they will be as generous in exhibiting it around the world as my family has been.”

The price instantly silenced any notion of a softening art market, at least for the most spectacular pictures, and apparently quashed the nervous atmosphere sparked by last week’s disappointing sales of contemporary works.

But reflecting the new realism in the salesroom, a number of the pictures that sold before “Dr. Gachet” went for below their low estimates, a condition unimaginable six months ago.

Another van Gogh, a self-portrait painted in 1888, sold for $26.4 million to the same anonymous European telephone bidder who was the underbidder for the record-shattering van Gogh that sold 11 lots before. Now among the the top 10 most expensive works of art sold at auction, the self-portrait had been in the collection of the late Robert Lehman, a major benefactor of the Metropolitan Museum.

In this incredibly dramatic evening, Christie’s racked up $269.4 million, the highest ever achieved for an evening sale at the auction house, although well within the presale estimates.

Although an impressive 44 works of art sold for more than $1 million and eight individual artists records were set, a chunky 23 lots out of the 81 works of art offered failed to sell and were “bought in” by Christie’s.

Though dwarfed by the two van Gogh paintings that consumed $108.9 million of the evening’s total take, Edouard Manet’s “The Bench” snared the third highest lot at $16.5 million. Like many other paintings that sold tonight, this one went for appreciably less than its low estimate of $20 million, indicating that the confidential minimum or “reserve” price agreed upon by the consignor was reduced in the wake of recent disappointing sales.

Among the records set tonight, Henri de Toulouse-Lautrec’s ravishing “Girl With Fur” sold for $12.98 million. It was one of the five “guaranteed” lots for sale from the Lehman collection.

A romantically soaring Marc Chagall, “Above the City,” went for a record $9.9 million to veteran Tokyo dealer Kasuo Fujii.

The record-shattering “Dr. Gachet” captures the melancholic gaze of the homeopathic physician, who is represented symbolically by a sprig of purple foxglove in a glass in the foreground.

Foxglove is the basis of digitalis, a widely used cardiac tonic. The flowers lean in the same direction as the doctor, tilting to the left of the composition. A luminous shade of ultramarine swirls across the doctor’s buttoned coat and the imaginary hills and sky that form a dramatic backdrop to his portrait.

Van Gogh painted the doctor’s portrait shortly after they met in June 1890, in the town of Auvers, just six weeks before van Gogh fatally shot himself in the side.

The artist wrote numerous letters to his brother, Theo, and fellow painter Paul Gauguin about the “heartbroken expression” of Dr. Gachet. The artist characterized him this way: “First of all, he is sicker than I am. … Now when one blind man leads another blind man, don’t they both fall in the ditch?”

Another version of the painting is owned by the Musee d’Orsay in Paris, which received it as a gift from Gachet’s son. It is currently on view in the blockbuster van Gogh centennial exhibition at the Van Gogh Museum in Amsterdam.

Unlike the other star lots offered in the Christie’s sale, the consignor, trustees of the Kramarsky estate, would not allow the van Gogh to travel to international previews because of its pristine condition.

Christie’s made a promotional videotape of the painting in English, French and Japanese, but observers here were concerned that the Japanese would never buy a painting of this economic magnitude without inspecting it firsthand. Many super-rich Japanese collectors view the works at these traveling previews, sending subordinates to bid in New York or bidding themselves by telephone.

Kramarsky, a banker, acquired the portrait in war-torn Amsterdam in 1941, shortly before he and his family fled to the United States. For many years the painting hung in the Metropolitan Museum’s summer loan exhibition before it went on extended loan there in 1984. It remained at the Met until the trustees consigned the picture to Christie’s last January. The widely exhibited picture was part of the museum’s blockbuster “Van Gogh in Saint-Remy and Auvers” in 1986-87.

Werner Kramarsky is a trustee of his father’s trust. He did not attend the auction tonight, but was in Washington at a gala dinner held at the National Gallery of Art in honor of Jasper Johns’s exhibition there.

Calling in on his portable phone on the way to the airport this afternoon, Kramarsky reflected on the about-to-be-sold portrait: “Personally, I feel some sense of loss, but I’m confident that we’re doing the right thing as trustees. That’s the way it has to be at the moment.”

Another van Gogh from the esteemed Kramarsky collection, “Bridge at Trinquetaille,” sold at Christie’s London in June 1987 for $20.24 million. Kramarsky said there are five paintings from his father’s collection still on loan to the Met.

This entry was posted in Auctions and tagged Christie’s, Vincent van Gogh. Bookmark the permalink.