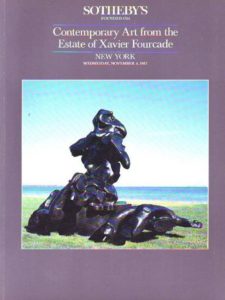 Art collectors tonight overrode the wave of caution that had threatened to sweep from Wall Street to the auction houses, laying down $17.6 million in a two-hour auction at Sotheby’s that offered a broad range of contemporary works.

It was the second-highest total ever for a single-session contemporary sale, and nine individual artists’ records were set.

Dominating the evening was Willem de Kooning’s compact “Woman (Green),” which sold for $2,035,000, continuing a run of high sale prices for the artist’s earlier works. Last May at Sotheby’s, de Kooning’s 1944 “Pink Lady” fetched $3.63 million, equaling the record for any contemporary work sold at auction. That hysterical sale, the biggest ever for contemporary art, generated $18.9 million.

An unusual and untitled collage by Jackson Pollock, resembling cutout figures, snared $1.2 million, the second-highest lot of the evening. The painting, like many others that have sold at high prices in recent months, was purchased by a Japanese collector.

Robert Rauschenberg’s mixed-media “Backwash” brought $814,000, a record for the artist. The work had been owned by Goucher College since 1959 and was sold to help support the school’s fine arts program.

The marathon evening sale started off with 25 works from the estate of Xavier Fourcade, a contemporary art dealer who died last April at age 60. All 25 works sold and brought a total of $2,899,050.

The highest lot in the Fourcade works was Malcolm Morley’s stormy “Day Fishing in Heraklion,” which brought $396,000, a record for the artist. Another Fourcade lot, de Kooning’s 9-foot-5-inch bronze sculpture “Seated Woman,” sold for $352,000.

Four paintings from the Andrew Crispo Gallery Inc. collection, sold in cooperation with the IRS and Rosenthal and Rosenthal Inc., which finances art galleries, brought $819,000.

Crispo was sentenced last year to a seven-year prison term for federal tax evasion. He owes the IRS some $8 million, and his art collection is being liquidated at auction to help pay the tab.

Washington native Morris Louis’ “Alpha Lambda” sold for $286,000, ending a string of buy-ins for the artist’s works. Works are “bought in” or removed from an auction when bidding fails to reach a predetermined minimum.

Another picture from that exhibition, “Castor and Pollux,” sold for a record $495,000. Richard Estes’ photorealist painting of Manhattan’s Upper West Side, “Bus Reflections,” sold to a Japanese collector for a record $484,000, eclipsing his previous high of $143,000.

The evening’s buy-in rate of 21 percent — 16 lots, including major works by Franz Kline, Sam Francis, Jasper Johns, Frank Stella and Roy Lichtenstein — was rather high, but according to Lucy Mitchell-Innes, head of Sotheby’s contemporary art department, that reflects extremely high presale estimates established from last May’s supersale. The auction, she concluded, was bullish.

Mitchell-Innes saw contrasts between tonight’s sale and last May’s. This time, she said, “there was less hysteria, a little more sobriety and very thoughtful bidding. There was plenty of energy and plenty of money for good prices.”

She added, “It was an extraordinarily successfully sale, especially with what we know about the stock market.”

John Marion, chairman of Sotheby’s North America, summed up the night with satisfaction. “Everybody is alive and well,” he said, smiling. “Reports of my death are premature.”

Tuesday night at Christie’s, caution marked the first market test of art since the stock market’s slide, with 14 works by major artists failing to find buyers.

“There were strong prices at both the top and the bottom, with a few disappointments in the middle,” said Christopher Burge, president of Christie’s in America. “However, most of the pictures which failed to sell were almost bid up to the reserve, demonstrating that there is a strong underlying market.”

The top lot of the sale, British artist Francis Bacon’s 1963 “Figure With Two Owls — Study After Velazquez Innocent X,” fetched $1.32 million. The oil and sand on canvas is of a ghoulish figure with melting features who grips the arms of a high-back chair while a pair of owls look on. A second Bacon painting, “Study for Portrait of P.L. No. 1,” brought $858,000, the evening’s second-highest price.

Works by Jackson Pollock, Frank Stella, Hans Hofmann, Robert Motherwell, Morris Louis, Mark Rothko and James Rosenquist were among the lots that failed to meet the confidential reserve price determined by the seller prior to the auction.

“I still feel confident in the market,” Martha Baer, Christie’s director of fine arts, said after the sale. “I still believe this does not reflect the stock market but that a weeding out was necessary. It all reflects the enormous amount of work that’s on the market this week.”

“A lot of the major collectors aren’t here tonight, and weren’t planning to come, and it didn’t have anything to do with the stock market,” said Douglas Baxter, vice president of Pace Gallery. “The Saatchis from London, the Nashers from Dallas, Will Hokin from Chicago, Doug Cramer from Los Angeles and the Meyerhoffs from Baltimore were missing. I don’t remember so many major collectors absent from a major sale. These are people who spend millions on art every year.”