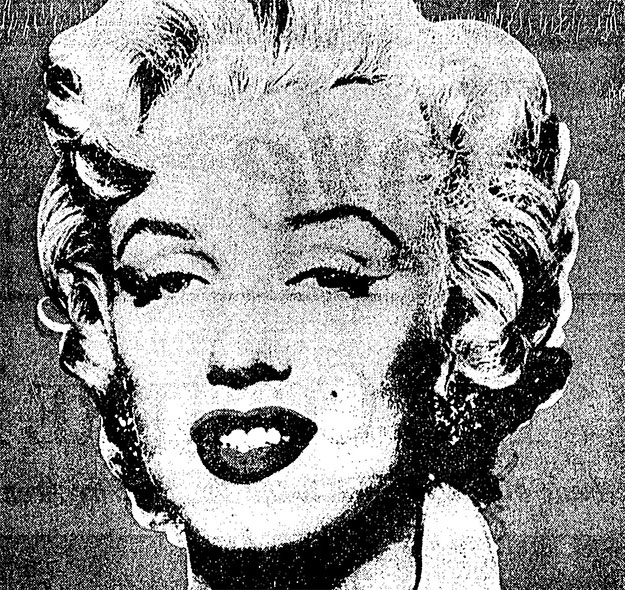 Andy Warhol’s “Shot Red Marilyn” goes on the block with a presale estimate of $2.5 million to $3 million

NEW YORK—In 1964 a woman walked into Andy Warhol’s Manhattan studio, slowly removed her White gloves and calmly shot a stack of paintings of Marilyn Monroe right between the eyes. Warhol repaired the dime-size bullet wounds himself, and if you look closely, the patchwork is visible. The pictures, blown up and silk-screened from a publicity photo, became known as the Shot Marilyn.

In May 1989, at the height of the international art boom, “Shot Red Marilyn” was sold at auction for $4.07 million, a record for a Warhol painting.

Tomorrow, the picture goes back on the block at Christie’s New York with a presale estimate of $2.5 million to $3 million, testing a market that has slowly emerged from the ashes of the 1991 art bust.  It is only one picture out of hundreds being offered this month in a choreographed series of auctions, a biannual event that is a commercial barometer of the art market. It is also a potential cash cow for the auction houses, Christie’s and Sotheby’s, which receive a 15 percent commission on the first $50,000 of each lot and 10 percent thereafter.

But some observers say Christie’s estimate for “Shot Red Marilyn” is nothing short of fantasy.

“Not on this planet,” said Karen Amiel, a New York private dealer who sold Warhol’s billboard-size “Marilyn x 100” to advertising mogul Charles Saatchi in 1984 for $850,000.

“It’s too high for the current market,” said another prominent private dealer who asked not to be identified. “Christie’s must have someone in mind.”

But Christie’s is confident it has a winner. “This is a smashing object,” beamed Diane Upright, the auction house’s top contemporary specialist, during a recent private showing in the firm’s high-security picture vault on Park Avenue. “This is the kind of painting that could conceivably attract a speculator.’

Upright was referring to the near-extinct species of buyers, many of them Japanese, who dominated the auction salesrooms and contributed to the wild prices of the late 1980s and early ’90s.

Speculators may also go after Warhol’s silk-screened portrait of a bearded O.J. Simpson, painted in 1978 and signed on the back of the canvas by the football star and the artist. The picture strangely resembles a mug shot, and carries an estimate of $40,000 to $60,000.

Combined estimates for sales of contemporary, and impressionist and modern works during the up-coming two weeks range from $152 million to $193.5 million, not particularly strong numbers even compared to the sales six months ago.

This dip in the value of art up for auction is a clear indicator owners of expensive pictures are still reluctant to release them into an uncertain marketplace.

“The people who have these wonderful things to sell aren’t quite sure where the market is,” said one blue-chip private dealer. “It needs to be more clearly defined before they’re willing to sell things at these adjusted, lower prices.”

David Nash, director of Sotheby’s international impressionist and modern art department, said “We’ve had a very difficult time getting anything for sale.” He partially blamed negative coverage of the sales last May, which he said “unjustifiably discouraged a number of people from selling now.”

Bad press is apparently of little concern to the consignor of ‘Shot Red Marilyn,” Tokyo’s Masao Wanibuchi, who owns several custom-tailor shops in the city’s swanky Ginza district. Though Christie’s wouldn’t reveal his identity, Wanibuchi also is said by a New York dealer familiar with the collector to have consigned Joan Nfiro’s huge “Personnage Oiseaux” at Christie’s Nov. 9 sale. It is estimated to bring $1.5 million to $2 million—about half what he paid for it in 1989.

Sotheby’s is challenging the market with a pop art gem, Roy Lichtenstein’s cartoon painting of a tearful blonde, “I…I’m Sorry” from 1965-66. It carries an unpublished estimate of $2 million to $2.5 million—unpublished because the auction house worries that printing the figure in the catalogue might scare off potential bidders.

The Lichtenstein is consigned by the veteran So-Ho dealer Holly Solomon, whose husband, Horace, commissioned the painting for their 10th wedding anniversary in 1966.

In the impressionist-modern arena, Sotheby’s leads off on Nov. 8 with Amedeo Modigliani’s 1919 Portrait of Jeanne Hebuterne” (unpublished estimate in the $6 million range). The portrait is especially poignant since the subject, the artist’s pregnant common-law wife, leapt to her death just months lat-er, the day after Modigliani died.

Vincent van Gogh’s improvisational reed pen and sepia ink drawing “Wheat Field With Sheaves” (1888) was one of a group of 12 made by the artist during four days in Arles (est. $2 million-$3 million).
Joan Miro’s symbol-laden “Femme dans la nuit” from 1945 (est. $3.5 million-$4.5 million) formerly belonged to the late James Johnson Sweeney, the pio-neering curator at the Museum of Modern Art.
On Nov. 9 at Christie’s, “Nympheas,” a shimmer-ing Claude Monet oil from 1907, leads the pack of seven-figure contenders (est. $4 million-$6 million)

The crown jewel of paintings offered from the huge collection of the late cultural philanthropist Alice B. Tully, it hung in the bedroom of her Central Park South apartment in Manhattan.
A rare Constantin Brancusi plaster version of his famed sculpture ‘The Kiss” comes from the estate of Blanchette Rockefeller, former president of the Museum of Modern Art (est $900,000-$1.2 million)
Rockefeller acquired the 11-inch-high sculpture in 1949 for $475.