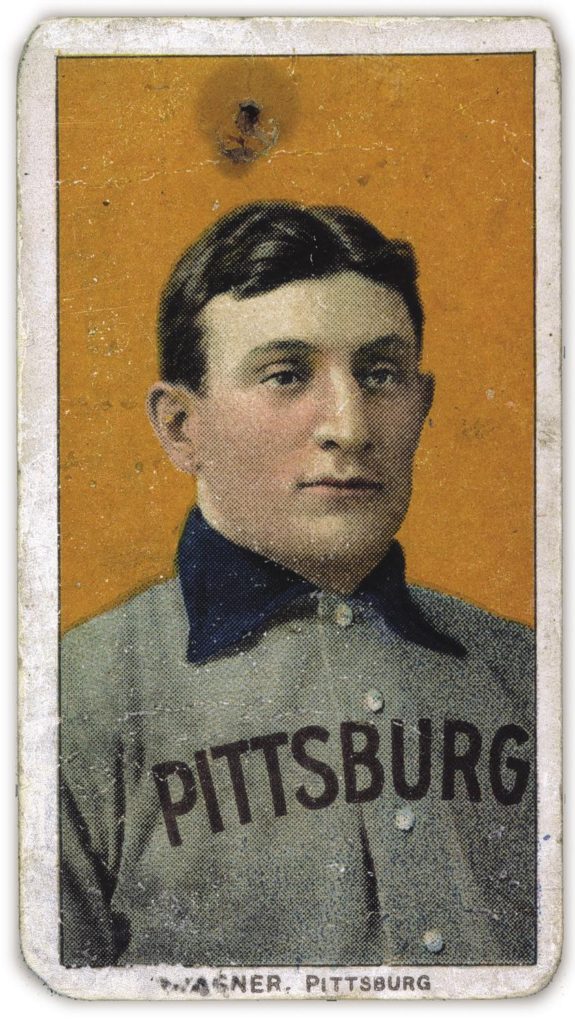 In a far cry from the warm and fuzzy childhood memories of flipping baseball cards for innocent gambling fun, sports memorabilia collecting has grown into a multibillion-dollar industry. In the past decade, prices of vintage baseball cards have topped the $100,000 mark 10 times at public auction, including a sale last summer when the most famous card of them all, the mythic Honus Wagner “T-206” from 1909, fetched a record-shattering $1.265 million on the leading online auction site, eBay.

Prices at auction and private sales at times rival those achieved by world-class fine art. Mickey Mantle’s circa 1960 game-used glove sold for $239,000 to comedian Billy Crystal at the $21.8 million Barry Halper sale of baseball memorabilia at Sotheby’s in 1999. (New Jerseyan Halper and his stunning collection were spotlighted in the October 1997 Cigar Aficionado.) The Utah Jazz home court that hosted Chicago Bulls superstar Michael Jordan’s last game sold to trading card manufacturer Upper Deck for a reported $1 million in a private sale brokered the same year.

Still, according to several experts, 90 percent of the hobby is devoted to its oldest member, the baseball card. “Right now, I’m buried alive in baseball cards,” moans Chicago’s Bill Mastro, the chairman and CEO of MastroNet (www.mastronet.com), the world’s largest sports memorabilia auction enterprise. Mastro is scrambling to nail down consignments for his live, real-time Internet sale on June 7 and 8 (bidders can also compete by telephone). Rummaging across his desk at his headquarters in the Chicago suburb of Oak Brook, Mastro suddenly brightens. “I have a complete set of Cracker Jack baseball cards from 1915 in the auction,” he says, sounding like a kid with his collection of Topps cards. “They’re really colorful cards and it’s a really cool set.” At the moment, the 176-strong card set is estimated to snare in the range of $50,000-$60,000.

Digging deeper into his highlights pile, Mastro raves about a 1957 All-Star Game bat wielded by Milwaukee Braves slugger Hank Aaron. Mastro predicts the bat will hit $10,000. Another winner, says Mastro, is San Francisco Giant Willie McCovey’s 500th home run ball, with a minimum bid of $1,500. For Yankees fans, a 1961 Roger Maris bat that hit one of his record-breaking 61 home runs also carries a minimum bid of $1,500.

A seasoned collector in his own right, Mastro speaks of the fielding prowess and batting might of his childhood heroes Willie Mays and McCovey with almost religious reverence. Mastro first came to national attention in his field in 1991 during the landmark $4.5 million Copeland Collection of Important Baseball Cards and Sports Memorabilia sale held at Sotheby’s New York. It was James Copeland’s mint condition tobacco card of Wagner, the storied Hall of Fame Pittsburgh Pirates shortstop, that helped stoke the fires for this catchy collectible. The card was sold to hockey great Wayne Gretzky and former Los Angeles Kings owner Bruce McNall for a then-whopping $451,000.

Mastro, serving as the disarmingly blunt-speaking outside consultant for the sale, easily upstaged Sotheby’s then fussily refined manners. “Really, that was the first auction of any substance and it really gave our industry credibility,” claims Mastro, a veteran sports memorabilia dealer who toiled as a Sotheby’s sports consultant for four years before forming his own venture in Chicago in 1995.

In a way, the episodic auction sales of the T-206 parallel the explosive growth of the sports memorabilia industry in general. The petite, 1 x 2 1/2 inch lithographed card, now encased in a slab of clear plastic, sold again in 1996 at Christie’s East in New York to Chicago baseball card collector Mike Gidwitz for $640,500. Gidwitz put the T-206 up for sale again four years later, in part because he could no longer risk exhibiting what he calls “the Mona Lisa of baseball cards” at his home. That sale, doubling Gidwitz’s original cost, took place at the aforementioned eBay event, which was part of a 1,000-lot online marathon of baseball cards and memorabilia organized by Robert Edward Auctions, a division of MastroNet.

“We’re all real stand-up, hardworking guys with real good, honest reputations that are not going to cheat the shit out of you,” sums up Mastro of his dream team of specialists. “We put them all together last year and formed one big company.”

Still flush from his “phenomenal” year in 2000, when the various MastroNet entities auctioned off $32 million in property, Mastro is mindful of larger economic indicators threatening his field of dreams. He boasts of the 6,000 active bidders on MastroNet, but isn’t shy about throwing a slider of caution that the market is fickle.

Citing the enormous price fluctuation in cards due to a variety of factors, including condition, rarity and provenance, Mastro uses slugger Mark McGwire’s rookie card as an example. A so-called gem-mint 10-rated McGwire card could fetch $5,000 in today’s market, while a near-mint-to-mint 8-rated card would only bring $250. Mastro says the difference between the two cards is so subtle, it would be impossible to detect the gem-mint example when holding both at arm’s length.

Not surprisingly, Mastro, who has sold everything from a nylon stocking that once belonged to Marilyn Monroe when she was married to Yankees idol Joe DiMaggio, to legendary baseball owner Bill Veeck’s wooden leg, has blunt advice for beginning collectors.

“When you’re a novice at anything, you take your life in your hands, so I tell people to collect within their means. Don’t collect just according to what it’s worth, or think it’s only going to get more valuable later on, because there’re no guarantees. If you like baseball cards, collect baseball cards; and if cards don’t do it for you but autographed baseballs do, then collect those. Make sure whoever you’re dealing with is really reputable, and don’t be afraid to call around and ask.”

That’s smart advice. Big-league forgers still plague the hobby, particularly with autographed memorabilia, as evidenced by the ongoing FBI sting caper known as Operation Foul Ball (begun in 1996 to investigate forged sports memorabilia, particularly autographed items), so authenticity is of paramount concern to every collector. Several independent businesses have sprung up as a result, such as Professional Sports Authenticators, that rate cards and issue certificates of authenticity (COAs) that the cards are unaltered; all, of course, for a fee. But keep in mind that less scrupulous people have produced bogus COAs as well; the U.S. government has successfully prosecuted some of the offenders.

Mastro has turned part of the auction industry on its ear by straying from long-accepted practices of consignors leaving secret reserves on the minimum price acceptable for an item offered at auction. Auction houses would base presale estimates on the minimum reserve while keeping the reserve secret.

“We print the minimum bid right in the catalogue, so that’s the reserve,” says Mastro. “Collectors don’t like hidden reserves. So, if someone bids that number or more, they can win that item. Sure, there’re times when the consignors are disappointed,” says Mastro, but “anybody that tells you they bat a thousand in this business is ridiculous.”

Apart from MastroNet’s Mastro Fine Sports Auctions, Robert Edward Auctions and Ron Oser Enterprises, plenty of other auction enterprises ferociously compete in the sports memorabilia field. They range from international giants such as Christie’s and Sotheby’s to smaller, boutique-type houses such as sports uniform specialists Grey Flannel Auctions of Great Neck, New York (www.greyflannelauctions.com), and the theme sale-oriented Leland’s of Seaford, New York (www.lelands.com). All of the above maintain state-of-the-art Web sites and provide a wide array of bidding options that can range from fax and e-mail bids to live-auction, paddle-waving showdowns.

Asked to name his phantom dream item, Mastro doesn’t hesitate. “Bobby Thomson’s home run ball,” he says, the so-called “shot heard round the world” in 1951 when New York Giants star Thomson blasted a game-winning home run to beat the Brooklyn Dodgers in the final game of their spine-tingling playoff. (That shot was back in the news in February when it was revealed that the Giants were stealing the Dodgers’ signs during the game.) “If somebody has that ball out there and could prove it, that would be a really big deal.”