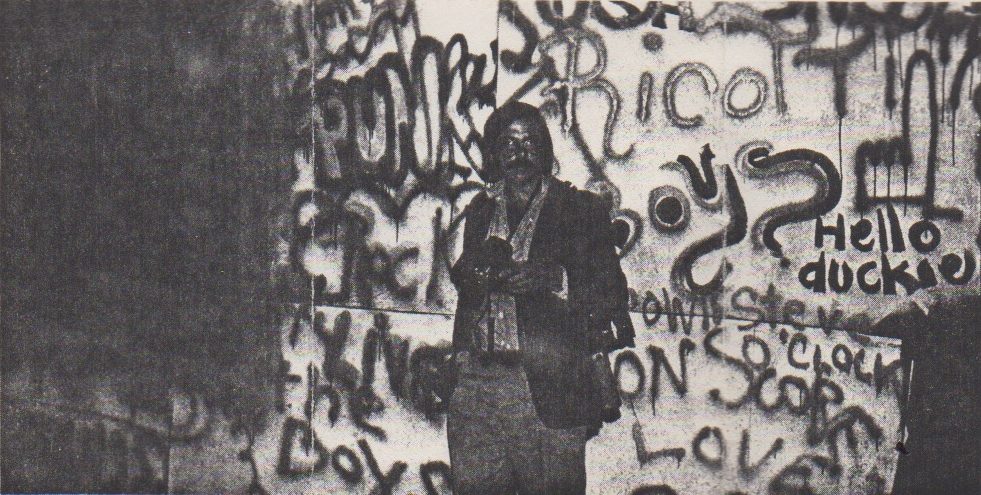 Eric Kroll’s “Sex Objects, An American Photodocumental”, published a year ago by Addison House in Danbury, New Hampshire, rode out the waves of a media firestorm created in part by NY State Senator John Marchi’s (R.—Staten Island/Chairman of the NYS Senate Finance Committee) apoplectic charges that the book is “patently pornographic” and “the work of a quick-buck pornographer.”

Why would a state senator get livid about a photography book published in New Hampshire? A quick flip to the copyright page of Sex Objects announces, “This project was aided in part by a CAPS fellowship from the New York State Council on the Arts.” That caption, spotted by an aide of Marchi’s who was stranded in the Rochester Airport during a severe snowstorm in February, and to while away the delay, purchased the $10 book in the airport’s bookstore.

Marchi met the press in Albany and demanded that Kitty Carlisle Hart, Chairman of the New York State Council on the Arts, “show cause” why state financing of the Creative Artists Public Service (CAPS) should be refunded in the upcoming appropriation session of the Senate.

Eric Kroll was bivouacked in the Tropicana Hotel in Hollywood, shooting stills -260 rolls of film in four weeks—for a new Paul (Taxicab) Schraeder film Hard Core, starring George C. Scott when the media blitz broke. (Schraeder hired Kroll as a specialist photographer after seeing Sex Objects.) Upon his return to New . York City, his telephone was hip deep in calls from thepress. He urged the reporters to hot foot it to Times Square and see if the book was a “best seller.” It took the leg work of Newsday and later, the staff of CAPS, to substantiate Kroll’s claim that Sex Objects is not . sold in porno book stores—rather, that it can be found at Rizzoli’s on 5th Avenue, Wilenta’s 8th St. Bookshop, Witkin on 57th St. and New Dawn on Spring St. in Soho.

That’s what burned the photodocumentor the most— the Marchi charge about being a best seller. “Everyone thinks,” mused Kroll, “that it’s a best seller. Little do they know it’s a great media seller. It should have been but it wasn’t. I knew where he was coming from— being a politician, he can go through the media while an individual doesn’t have an equal amount of ammunition. He gets lots of coverage while my press release gets picked up by one guy. You’re accused kid when you make your reply there’s a blank wall.”

When Kroll applied to CAPS in 1975 with 15 photographs and a brief proposal to shoot present day women who use their bodies to earn a living—massage parlor girls, go-go dancers, prostitutes, strippers and nude models—no book was proposed, it was simply a project, a portfolio of photographs. A panel of professional photographers awarded Kroll a $5,000 grant. The money would pay for rent, food, paper and chemicals and model releases.

Kroll ran into one of the panel members after he got the grant and asked him what he thought of the idea as a project. Paraphrasing the panel member’s conversation, Kroll said, “that didn’t mean anything to us. It had to do with the quality of the prints—the images. That’s why you got the 31-ant, not on the idea you were pursuing.” The photographer was on his way to create an update of Henry Miller’s “Air-Conditioned Nightmare” (1945, New Directions) with a photographic record of the “women who worked inside these American roadside sex shops.’ And please don’t confuse this with Tom Robbin’s bestseller, Another Roadside Attraction.

Kroll made a beeline for the Cornbelt, the Midwest”where lots of sex is for sale.” Indiana, Ohio, Illinois, and Iowa. He consulted the classifieds in local papers or just let his eyes wander to the neon-coated fantasy bordellos hugging the highways. It was like McDonald’s but just another type of fast food.

“It was a really lonely scene,” reflected Kroll, sliding over the table top a stack of tearsheets from the Marchi brouhaha, serious review:; of his book in Art in America and Camera 35. a thick portfolio of b&w prints ranging from George Ballanchine to a punk rocker at CBGB’s, Christo, Andy Warhol, Holston, Governor Jerry Brown, Louis Kahn and Nam June Paik.

“At the time I wasn t used to Holiday Inns. I was getting rejected for being an FBI agent or some kind of photography freak and tien I’d come back to the Holiday Inn with its air-conditioning and symmetrical lamps. It wasn’t easy but I knew I was getting good material. You had to always be careful in your relationships. You’re dealing with someone’s life and the photographs can affect that person—there’s a morality to it. There are repercussions.”

The interstate oddessy covered thirty cities—fifty women were photographed in the “natural” surroundings and over a hundred interviews were recorded. Fake leopard skin pillow covers, tacky floral velvet wallcoverings, an ascetic looking pallet cot flanked by a nightstand supporting an army of Jergen’s lotion, baby powder, vaseline bottles and a short stack of crisply folded “hand” towels—were standard equipment in the sex sweat shops. The women who worked in these garishly adorned rooms often posed with the tools of their trade—a vibrator, a noose, bondage chains, a Poloroid “Zip” camera. Many of the portraits were free of props. A young blond, freckle-faced, posed crosslegged on a metal folding chair, wearing a ribbed purple tank top and black shorts. Her innocent gaze and slight smile could easily appear in a cropped high school yearbook photo.

After the CAPS fellowship expired and between free-lance assignments with the West German news magazine, Der Spiegel (a Teutonic Time), Kroll assembled the photographs, transcribed some of the interviews and wrote a text on his modern American sex vehicles. Attending a conference on photography books at the George Eastman House in Rochester in early 1977, Kroll met with a distributor of photography books, Light Impressions, who flipped over his images. The distributor introduced Kroll to Addison House and eight months after the handshake, Sex Objects was published.

Fiddling with a mug of yesterday’s coffee and finally pushing it away with a tempestuous look of disgust-the photodocumentor responded to a question—Is Sex Objects a springboard for state censorship of the arts? “The most disturbing thing in this entire mess,” said Kroll, “is what came down in an article in the New York Times later on, after the Senate hearings, where it said that other Senators had warned Ms. Hart that she better follow the conservative guidelines set by Marchi. That’s what freaked me out—blatantly coming out and saying—better cut down on some of your freedom. That was scary, mind-boggling. It’s censorship. Five years ago that (guidelines) would have been laughed right out of the room. Don’t you think?”

State Senator John Marchi’s press secretary, Jerry McLaughlin, said, “The Senator is not in the censorship business. He’s not picking on the arts council—he’s the strongest supporter of its next to Conklin in the Senate. We’re not going to sob ourselves to sleep over the art community constituents in New York City. There has been some discussion in committee of writing language in to suggest a tighter screening process for applications (in CAPS) but nothing too restrictive.”

In spite of Marchi’s hailstorm of charges, CAPS was refunded by the New York State Council for the Arts for the 1978-79 with a one million twenty five thousand dollar appropriation, some $25,000 more than the previous fiscal year. The guidelines which the senator alluded to were not included in the CAPS budget. This will enable CAPS to award approximately 165 artists with grants.

Kroll’s latest passion is a project light years away from vibrators and drive-in “hand-job” studios. The topic is American Indians and alcoholism—the place, tiny pockets of despair in Gallup, New Mexico and Cortez, Colorado where drunk tanks house some inebriated and hallucinating remants of a battered culture. Staring at one of these blown-up, black and white images from the Pamunkey Indian Reservation, Kroll says, “Last year I was a manic-depressive as the dice roll, why was the world treating me so bad? Then the Columbia Pictures thing happened. Right now I’m on an upswing. I shoot real people. This is the last goround for a while on women. I shoot women a lot.”

Unsure of his future in government supported grants after CAPS teetered on the brink of punative budget reprisals from Sex Objects generated potshots in Albany, Kroll surrendered to black humor and roared with laughter—”Yes, I guess I’m behind the eight-ball. It’s like Danny Lyons,” (a fellow photo-journalist in the Magnum ambulance driving tradition) “who said, I’m not doing anything good unless I get kicked out.”