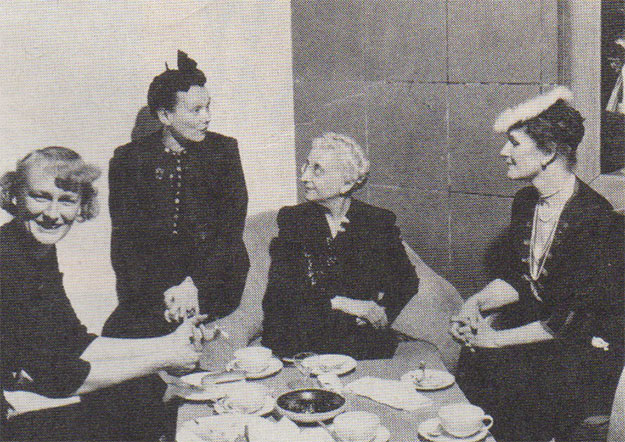 Fifty-five years ago, three eminently energetic, far-sighted, and fabulously wealthy women
founded the Museum of Modern Art in New York. Abby Aldrich Rockefeller (wife of John D. Jr.), Lillie P. Bliss, and Mary Quinn Sullivan wooed, over lunch, one A. Conger Goodyear, a merchant prince and art connoisseur, recently discharged from the Albright-Knox Art Gallery in Buffalo after the trustees had a fit over his $5,000 purchase of a Picasso.

Goodyear was swept away by the trio’s missionary zeal and accepted the reins of the organizing committee, recruiting a brilliant cabinet of art talent to open the eyes of the American public to the wonders of modern art.

In November of 1929, the museum debuted in a suite of rented rooms on the twelfth floor of the Heckscher building on Fifty-seventh Street and Fifth Avenue, with a loan show of thirty-five Cezannes, twenty-eight van Goghs, twenty-one Gauguins, and seventeen Seurats.

Alfred H. Barr Jr. (1902-1981), lured away from Wellesley College, became the museum’s first director at the ripe age of twenty-seven. Barr stands out to this day as the guiding aesthetic light of the institution. Some brief pearls of Barr’s wisdom: “The museum is aware that it may guess wrong in its acquisitions. When it acquires a dozen recent paintings, it will be lucky if, in ten years, three will seem worth looking at, or, if in twenty, one should survive. For the future the important problem is to acquire the one. The other nine will be forgiven—and forgotten.”

During the war years MoMA became a kind of buttoned-down Rick’s Cafe, navigating avant-garde European refugees out of the jaws of concentration camps. Max Ernst, Yves Tanguy, Marc Chagall, Andre Masson, and Jacques Lipchitz were spirited out of Vichy, France with a combination of cash, contacts in the State Department, and, once again, the sense of mission.

A noon-hour, three-alarm blaze on April 15, 1958, on the second floor of the museum, killed an electrician, injured scores of firemen, and burned to a crisp a major Monet water-lily painting. Dense, black smoke poured through the museum’s air conditioning ducts, smoke-damaging over five hundred modern masterpieces. A volunteer “bucket brigade” of staff members cooly removed hundreds of endangered paintings from the museum, and Nelson Rockefeller (as legend has it) prevented a fireman’s ax from slicing through the back of the Seurat masterpiece, La Grande Jatte (on nervous loan from the Art Institute of Chicago).

As fate would have it (similar to the time a van Gogh drawing, Sorrow, was stolen and returned two days later—wrapped in newspaper—left with the ice cream vendor in front of the main entrance), a blanket insurance policy based on current market rates returned enough money on the destroyed Monet to enable the museum to purchase a fabulous water-lily triptych by the master of Giverny.

On its thirtieth anniversary in 1959, the museum launched a $25-million fund-raising drive to build two new wings and an expanded sculpture garden. After a five-month closing, MoMA reopened on May 27, 1964, with black-tie pomp.

Another twenty-year cycle of growth, controversy, and rapid change has ferried this American picture palace to a new place and, yes, another reopening. During this last voyage, 500,000 viewers ravished a thousand artworks by Cezanne, and 1.3 million came to see the ultimate Picasso retrospective in 1980. If only the “Adamantine Ladies,” Abby, Lillie, and Mary, were here to see what their little luncheon spawned in 1929!

This entry was posted in Articles and tagged MOMA. Bookmark the permalink.