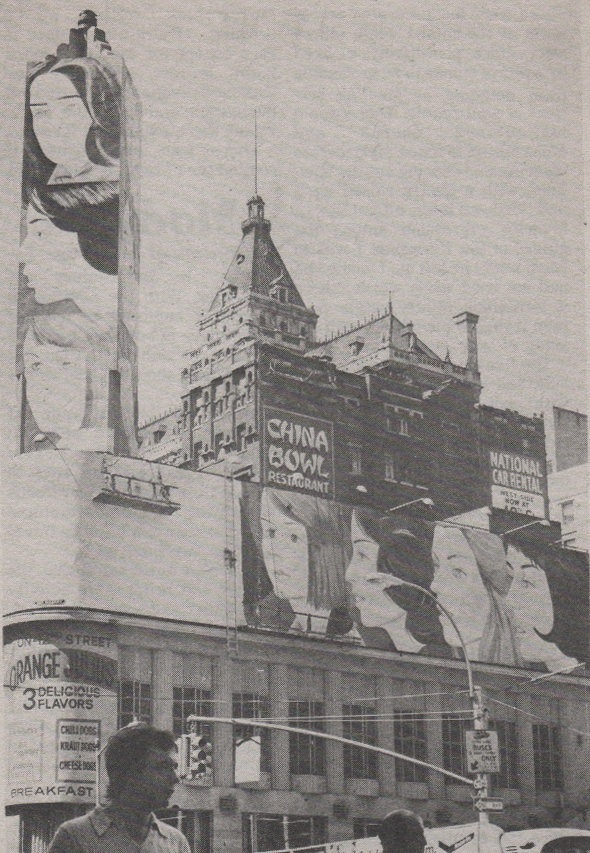 In the 1950’s Alex Katz, a member of the New York School would often wander around Times Square. transfixed by the myriad billboard—images of commercial art. An ardent admirer of Mark Rothko. Katz made a mental note of how lousy Rothko’s work would look along the Great White Way while his own style of painting would translate well to the big “screen.”

The building, housing RKO General’s WOR-TV studios is triangular with fluted Doric columns, resembling a crumbling net from a ghost city movie lot. The building’s facade is perfect for Katz’s sly tribute to the Elgin marble frieze, which at one time adorned Athen’s Parthenon until Lord Elgin bamboozled the art treasures from the “barbaric’ Turkish regime.

Directly below the east facade of the billboard is the Rialto Theatre. The marquee boldly announces “3-0 Exclusive World Premieres of Hard Candy and Heat Wave, the seven hottest sex goddesses ever in film history, a super sexual scorcher.”

In haughty contrast, the cool profiles of Katz’s blondes, brunettes and redheads gather visual momentum as the faces flow south like and arabesque along the metal band of white space to create a powerful apparition of serene beauty.

The convoluted chronology of events leading to RKO’s donation of billboard space commercially valued at $40,000 per year) and Seaboard’s contract, $14,000) began in the summer of 1975 with the city’s Office of Midtown

Estelle Schwartz, an OMPD planner, proposed a “Times Square Environmental Art Gallery” to enhance the landscape. The city’s ensuing financial crunch cancelled its involvement but ground work was completed on choosing an artist, Alex Katz, and a donor, RKO General.

Alex Katz donated the maquette design to the Public Arts Council. PAC, cooperating with Marlborough, wrote a letter to supporters of the artist requesting tax-deductible contributions of $2,000-$2,500 for the project. The donors would receive as gifts a portion of the cut-up maquettes in lots of three. RKO finalized the agreement, and donated the leased space for a period of two years (with PAC paying a $210 per month maintenance fee) and Seaboard Outdoor won the contract with the lowest bid, beating an arch rival, Van Wagner Advertising Corp by a painterly punch.

Judd Tully, is a free-lance writer is the author of “Red Grooms and Ruckus Manhattan,” published by George Braziller, New York.