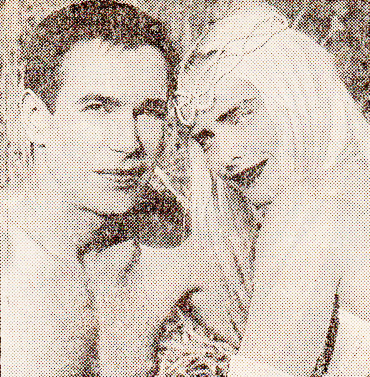 detail from “Jeff and Ilona Outdoors”

Made in Heaven,” Jeff Koons’s new X-rated art. show at the Sonnabend Gallery in SoHo, carries a warning sign on the front door: “Some of the art works presented by the artist in this exhibition are sexually explicit. Anyone under 17 years of age must be accompanied by an adult.”

Interspersed between these hard-core but remarkably unerotic tableaux is a cuddly assortment of carved wood sculptures of dogs on pedestals, the type and scale of which you’d find in softer materials at Fifth Avenue’s F.A.O. Schwarz. The pair of York-shire terriers (one in a blue ribbon, the other in pink), a groomed standard poo-dle and a shaggy sheepdog share wall and floor space with elaborate floral still fifes. One arresting example de-picts a long-beaked hummingbird pol-linating the polychromed petals of an exotic flower, an elaborate 3D takeoff on the 19th-century realism of Martin Johnson Heade.

According to Koons, all of these work as joyous metaphors of the cou-ple’s “made in heaven” union, a kind of postmodern Adam and Eve match. In the era of safe sex and “just say no” philosophy, Koons’s message seems recklessly out of sync, cynically distanced from the ongoing dialogues over censorship, pornography and sexual discrimination.

At 36, Koons, a onetime Wall Street commodities broker, is a certi-fied art world star, represented in avant-garde collections from the Mu-seum of Modern Art to the Saatchi Collection in London. Before his wide-ly hyped partnering with Staller (whose nickname, la Cicciolina, trans-lates into Little Fleshy One), Koons was best known for his kitschy appro-priations of inflatable Woolworth rab-bits cast in stainless steel and plexig-lass-entombed vacuum cleaners. A double-decker version of Koons’s Hoovers sold at Sotheby’s last May for $137,500.

A posse of modernist critics has slammed his lowbrow, dime-store slumming for tacky objects, all of them packaged in a state-of-the-art merchandising patina. But it’s Koons’s ability to get under critics’ skins that makes his popular culture promotions and advertising stunts so effective despite their artful shallow-ness. Koons is an ’80s creation, a market-bred hybrid of Andy Warhol and Salvador Dali. In the ’90’s, Ilona becomes the new Gala (the late Dali’s wife, muse and model), a sex object available in expensive limited editions. “Banality,” Koons’s last show at Sonnabend in 1988, grossed a reported $5 million. It also inaugurated his girlie magazine phase with a porcelain sculpture of the “Pink Panther,” mat-ing the famous Hollywood cat with a Playmate-type bombshell. (MGM, the copyright owner of the Pink Panther character, sued the artist, one of sev-en pending suits involving the “theft” of protected images. Koons describes this postmodern style of poaching as nothing more than participating in a “visual vocabulary,” open and free to all. “It’s like trying to limit somebody from using the word ‘you,’ ” says Koons.)

This time at Sonnabend, Koons ap-propriates himself following a rigorous regime of pumping iron and cos-metic sessions with a plastic surgeon. Heavily made up, grappling with the pink-booted, blond-tressed Cicciolina, Koons looks like a miscast version of Tarzan performing a skit on “Satur-day Night Live.”

“Dirty-Jeff on Top” has the grime-smeared couple writhing on a foam core rock, set against a parched desert background. A number of these “hard” canvases are replays of Ciccial-ina’s past performances, memorialized in photo layouts from Playmen, an Italian magazine. “Hard” is Koons’s terminology for penetration. He also makes “soft” versions.

“Ilona on Top (Rosa background)” is the largest and most expensive (at $390,000) piece in the exhibit. Cast in plastic and painted in seductive shades of pale pink, the overgrown duo cavort in a “soft” state. Ilona’s gold pumps hover over the finger length toes of the artist underneath. A fluttering band of plastic butterflies surrounds the oval love couch.

More modestly scaled are the neo-baroque white marble sculptures that also play off of Michelangelo and Bernini. Produced in editions of three by Italian artisans under Koons’s close supervision, they effectively straddle the cultural’ gulch between art and commerce. “Self-Portrait” features a bare-chested Koons, eyes closed but facing heavenward, his hair slicked back in Elvis Presley fashion. A phal-lic profusion of new age crystals pro-trudes from the bust. They rival—at least in ambition—any Renaissance doodad. As the artist says, “I’ve always tried to exploit myself to the fullest.”

This entry was posted in Articles and tagged Jeff Koons, Made in Heaven. Bookmark the permalink.