Skip to contentSkip to content
Artnews
How Jean-Michel Basquiat’s Sisters Organized an Exhibition Dedicated to Their Brother’s Life and Legacy, Full of Works Unseen for Decades
April 14, 2022 by Judd Tully 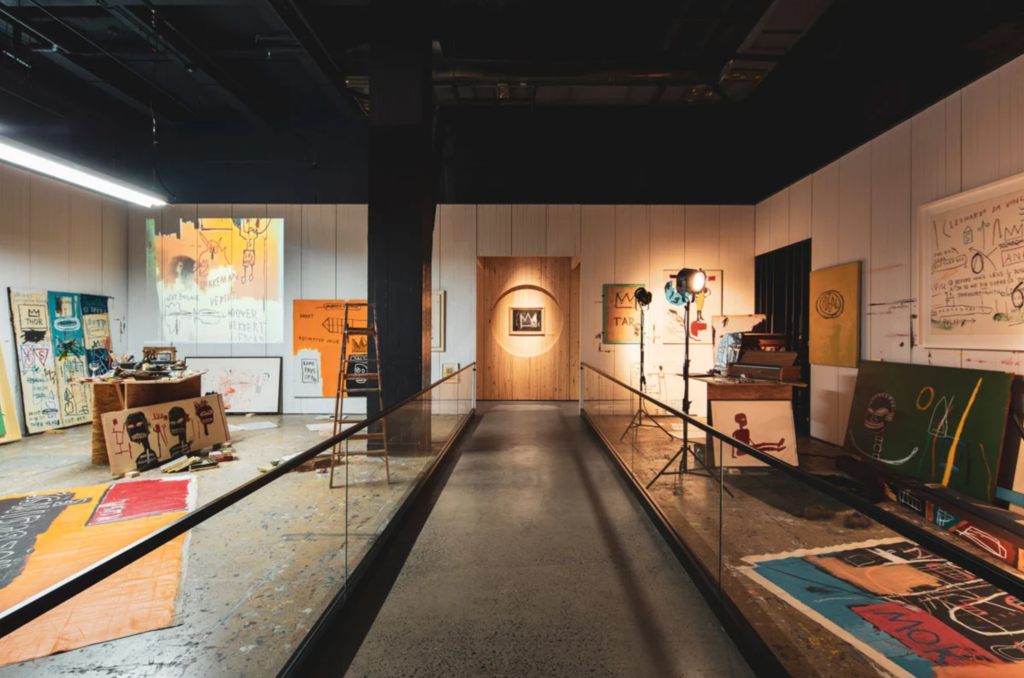 “King Pleasure,” a massive exhibition and homage to Jean-Michel Basquiat organized by the late artist’s two sisters, Lisane Basquiat and Jeanine Heriveaux, is comprised of some 100 paintings and drawings long cloistered by the artist’s estate and rarely, if ever exhibited.

Designed by starchitect Sir David Adjaye and featuring movie set–like re-creations of the family’s Brooklyn home as well as the artist’s famed Great Jones Street studio, the exhibition, which opened on Saturday at the Starrett-Lehigh Building in West Chelsea, feels a bit like visiting Marcel Proust’s bedroom at the Musée Carnivalet or Brancusi’s studio at the Centre Pompidou in Paris. 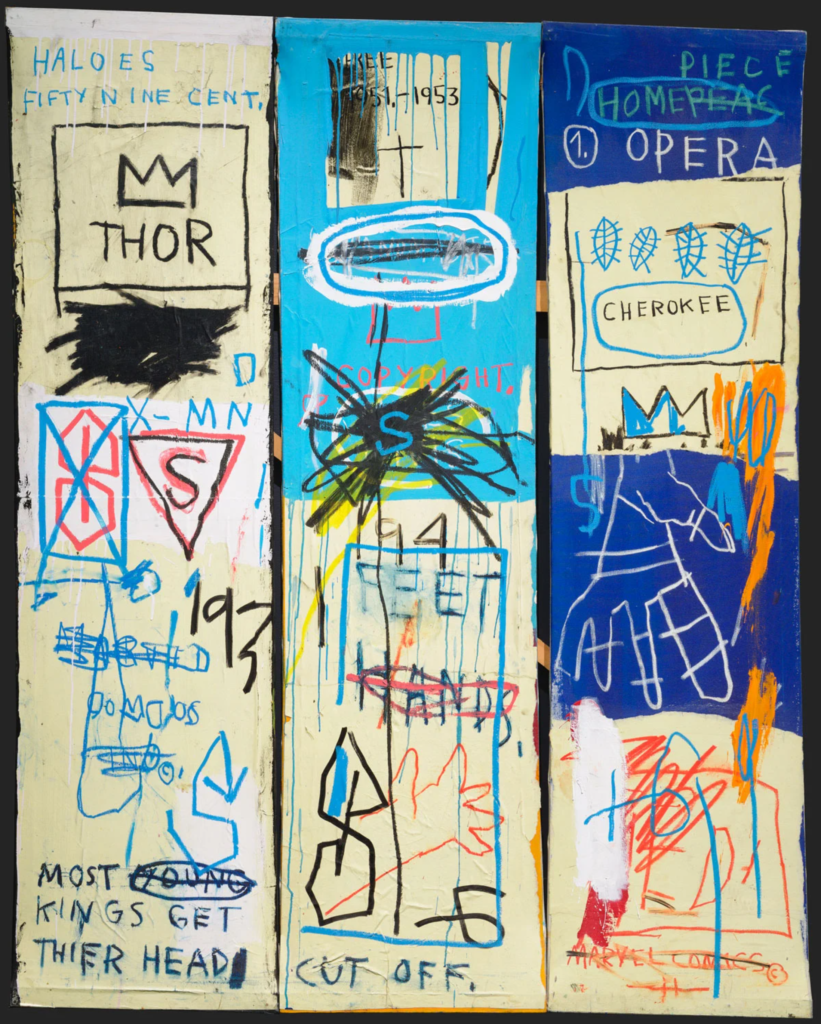 Objects and ephemera on view include a handwritten birth announcement card, dated December 22, 1960: “Our baby’s name is Jean-Michel” who weighed in a 6 pounds 10 ounces, as well as the artist’s pannier-equipped 10-speed bicycle, complete with a rusty chain—not to mention stacks of vinyl LPs, art books, African sculpture, and more.

Paintings and drawings range from an acrylic-on-glass-windown-frame work Untitled (Asbestos Flats Fix), from 1982 to the late and equally transfixing Kalik (1988), featuring the prophetic words “death of Marat” outlined in white against a sky blue background with floating sketched images of an airplane in flight and the reclining body of French theorist Jean-Paul Marat, whose death was famously depicted in 1793 by Jacques-Louis David. In an undated work on paper, Untitled (Miles Davis), is a small black head positioned dead center, like a shooting asteroid.

The exhibition title riffs on the name of ’50s jazz singer King Pleasure whose 1952 hit “Moody’s Mood for Love” was a favorite of Gerard Basquiat, the artist’s father. The exhibition is definitely a family affair.

“King Pleasure” is on view through Monday, September 5. Admission is $38 weekdays and $45 on weekends. Entry to the accompanying “King Pleasure Emporium” is included. (Nahmad Contemporary on Madison Avenue is also hosting a Basquiat exhibition, “Art and Objecthood,” through June 11; the show is comprised of some 48 works and curated by Dieter Buchhart.)

To learn more about “King Pleasure,” ARTnews met with sisters Lisane Basquiat and Jeanine Heriveaux in the exhibition’s recreated Michael Todd V.I.P. Room from the long-shuttered Palladium nightclub that once featured a pair of giant Basquiat paintings, Nu-Nile and Untitled—that are rehung here for brilliant cinematic effect. 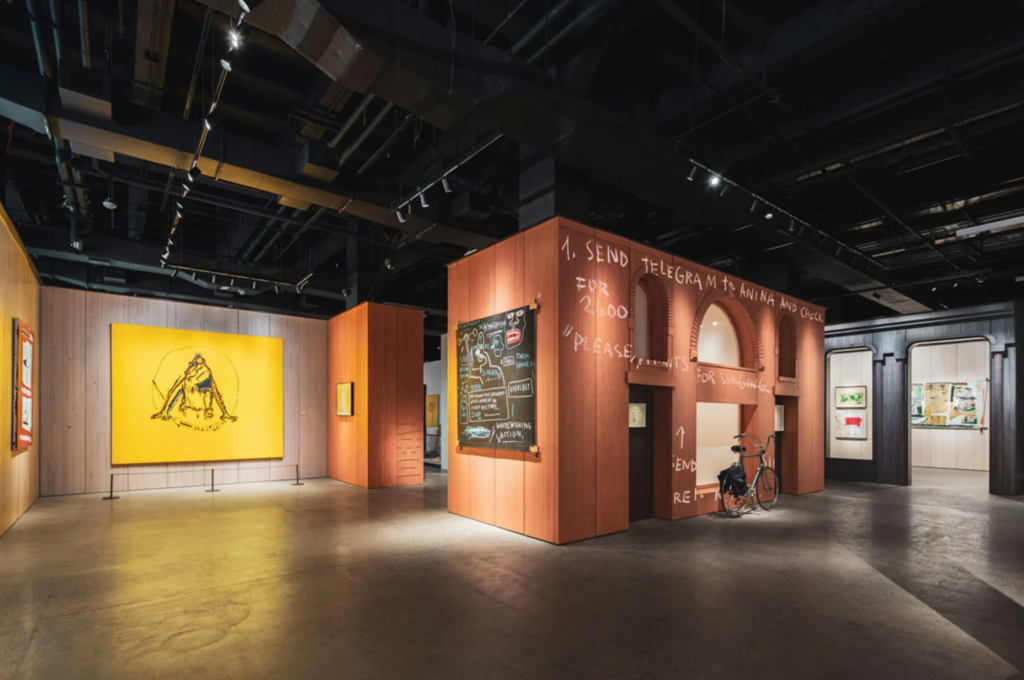 ARTnews: What was it like growing up in Brooklyn?

Lisane Basquiat: We lived a life that to us felt like a normal one. We watched cartoons on Saturday mornings. We grew up first in Flatbush, Brooklyn, and then we moved to Boerum Hill. Our dad would make brunch on Sundays, and we’d have French toast and pancakes and all that kind of stuff. The three of us were always very close and we played just like a lot of other kids did. We played outside. We played inside.

AN: When did you realize that your brother was an artist or was he always?

Basquiat: Well, think about being a kid at eight or nine years old and you have a sibling who draws. At the time we weren’t thinking you’re going to be the most phenomenal painter of the 20th century and affect pop culture, music, and all creatives all over the place. We didn’t think that, it was just that he was super creative in everything that he did.

Jeanine Heriveaux: So I would say, when he was younger, he was drawing. He was drawing on paper, he was drawing in sketchbooks, even as a teenager. We have sketchbooks of when he was 17. And he was just kind of creative in the way that he approached things and how he lived. He was the kid that thought, Hey, what would it be like to bake banana peels and peanut shells and put them in the oven and see what happens? He was kind of that kid who would explore and discover. Anything that popped in his mind, he kind of took that on and figured out what it was that he wanted to create. So he was one of action. Whatever came into his mind, he acted upon and that’s the type of child he was and ultimately the type of man that he became. 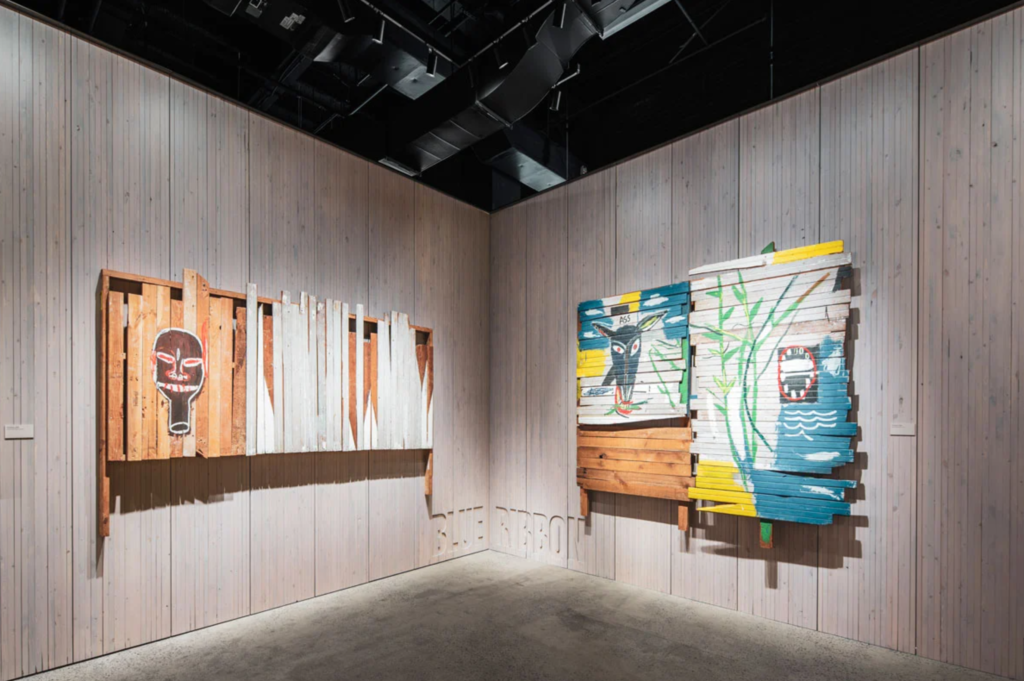 AN: Did you always know that you would get involved in your brother’s estate?

Heriveaux: So our dad prepared us that we would be taking over the estate when he passed away. That was in 2013. I don’t think that any of us expected that it would be so soon. And so there were a lot of stories that he shared with us in terms of what was going on with the estate, but because it was not expected, it wasn’t as if we kind of sat with him on a day-to-day basis. Because quite frankly, he allowed us the opportunity to have our own lives, raise our children, have our own careers.

And in 2013 we kind of hit pause, took this on, realized the gravity of what was before us, with the help of our stepmom Nora Fitzpatrick, who worked side by side with him. She really helped to guide us in understanding this world more. We had a great team that really brought us up to speed on what it was that we needed to do. And we worked with what was already created and then expanded on what it was that we felt was needed and what was right for us and right for Jean-Michel. 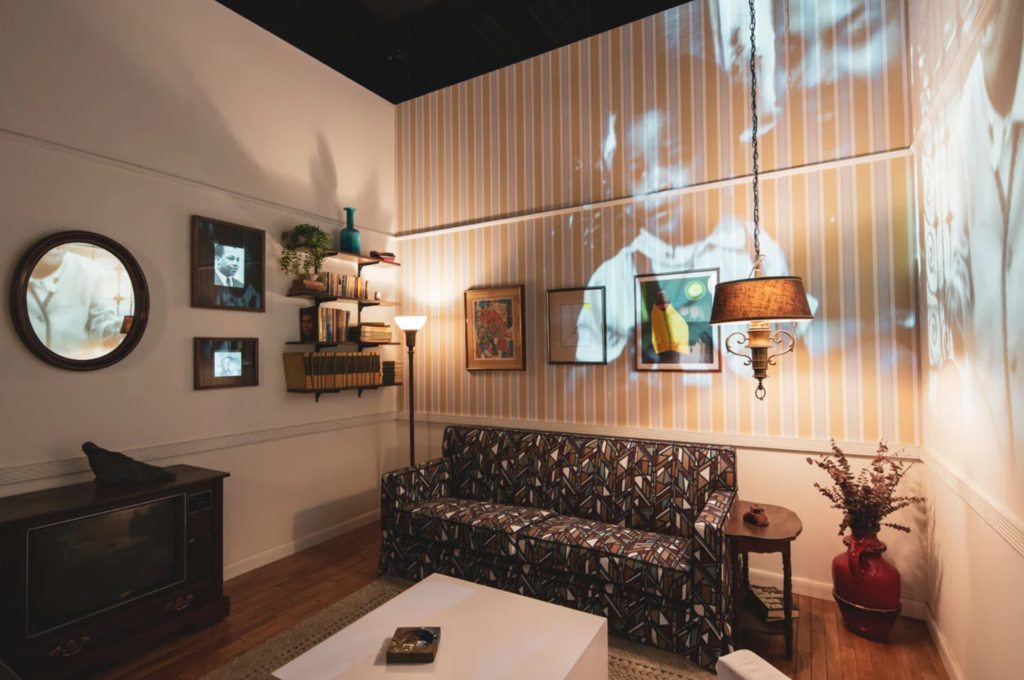 AN: How long was this exhibition in the making and how did you all decide to stage such a lavish production?

Basquiat: Here’s what happened: So Jean-Michel passed away in 1988 and threw our family for a loop. And so the immediate concern was ensuring that Jean-Michel’s legacy was protected and was cared for. And that’s what our dad did before he passed away. And one of the things we talked about casually was the fact that we have all these works and they’re locked away. And there are so many people that really have this deep desire and interest in Jean-Michel’s work and seeing it. And so our step-mom, maybe a few years in, made mention of that, that we want these works to be seen.

So back in 2017 we started initially pursuing what this would look like. Then during the summer of 2020 and still in the throes of the public health crisis and politics, we started focusing on it again and went back to contact [exhibition planner and former museum curator] Ileen Sheppard Gallagher of ISG Productions Ltd.

AN: So do you see this as museum-style retrospective?

Basquiat: This really was a labor of love and a walk for us through our own journey with Jean-Michel and our lives as three people coming into the Basquiat family. This was not a handoff to someone else to do. We personally decided every single thing that’s in here. These are works that haven’t been seen in decades. We’re not curators—we’re his sisters, we’re his family, and every work is ours, in our collection. And the only artist outside of Jean-Michel that’s in this show at all, are the four works by Andy Warhol, the portraits of Jean-Michel, our father, our Mom and Jeanine. 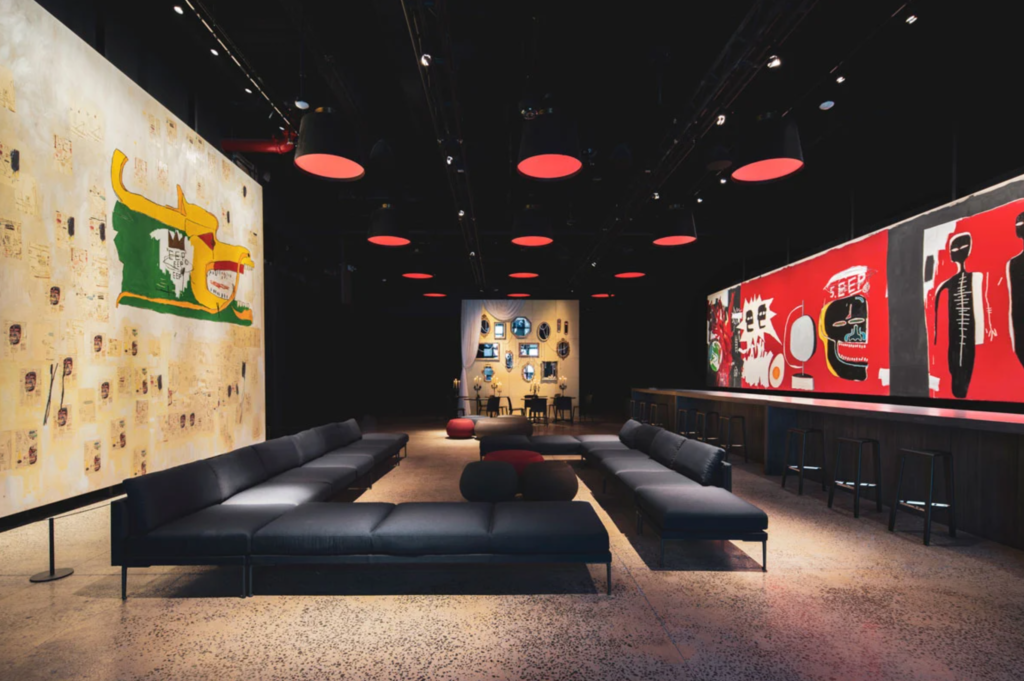 AN: So the story or myth created about Jean-Michel, that of a wild child with dreadlocks and consumed by drugs, isn’t the whole picture?

Basquiat: Well, this is a guy who’s walking around with dreadlocks and is this incredibly intense and beautiful artist who can’t hail a cab. Jean-Michel comes from an incredibly strong, passionate family. He’s the son of an immigrant father and a mother who was Puerto Rican.

Both Jeanine and I saw him and spoke with him within a month of his passing away. There were times where he was off, but it was like he was traveling, he was painting. He was doing these things. But did we have an intervention, like the way you see on reality TV? No.