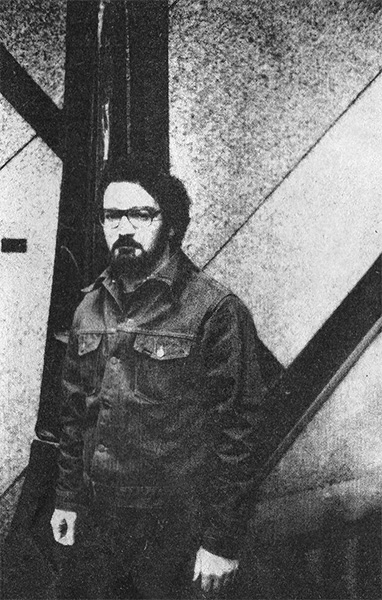 Leonard Giustino is one of the thirty CETA artists currently employed by the Council for the Arts in Westchester, a program initiated in late August, 1977, on a $396,000 grant made by the West-chester County government. Under the reminiscent acronym WPA (Westchester Partners in the Arts), Giustino finds himself walking a tightrope of bureaucratic regulations intertwined with his own artistic value system. Giustino says he fears for his job and sanity.

Giustino is one of approximately 4000 public service artists employed on CETA projects throughout the country. This new form of artists employment heralds f he re-emergence of the American art worker and gives rise to certain problems of adjustment on the part of both the artists (who are in theory employed by the “people”) and the administrators who are supposed to assist the artists in siting work, securing materials and acting as community liaisons.

The CETA experience has been welcomed by the overwhelming majority of artists who find the idea of full-time, paid artwork both challenging and rewarding. The Westchester WPA project reflects the national CETA phenomenon in that all of its participan-ts are being forced to deal with gritty problems such as the artists freieldom of expression, community support for the arts, and the administrative coordination of large numbers of artists, most of whom have never worked in a similar situation.

On one side of the CETA spectrum, sculptor Milton Sherill is very happy with the program, its organization and flexibility. “Nothing equals this, not even the WPA,”he says.

On the other side, Igor Demjen, pain-ter, sculptor, composer and “world traveller,” got booted from his CETA slot after two months on the job. “They just told me one day that they couldn’t use me anymore,” he stated. “They gave me no grounds other than personal ad-versity. An ACLU lawyer I contacted in White Plains on the day of my hearing wouldn’t get involved because there was no written statement on why I was fired. Of course, they couldn’t put down on paper that they didn’t like me. After the hearing, I just gave up—it wasn’t worth it.” 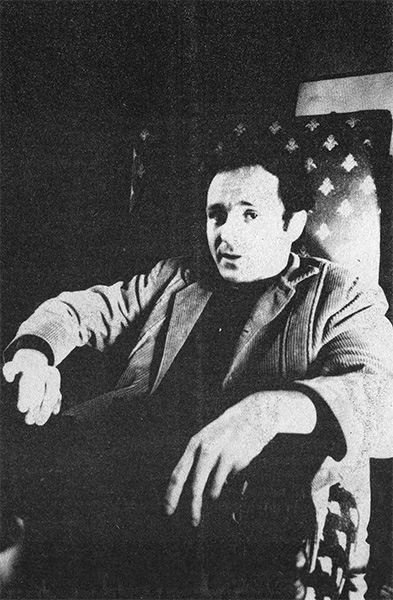 Leonard Giustino and Igor Demjen share one thing in common: they both feel there was false representation of the CETA program from the very beginning.

Giustino, early in the project, acted as a technical advisor on a girl scout mural project in Ossining. He wants, however, to paint his own murals—a “shot’ at contributing a lasting piece of art, rather than being merely “a glorified teacher.” Describing himself as a “subdued realist,” he is waiting for final approval to proceed on a historic mural in the new Town Hall in Mt. Pleasant.

Giustino recalls the initial CETA inter-view with Council program director Christopher Bruhl as exciting, “like a dream, to do your own art work and get a salary at the same time.” At that inter-view, he told Bruhl that he wanted to move away from teaching and get into the kind of work done by the old WPA, “where some unknowns got known by putting up their murals on the walls,” he said. Bruhl’s response was, “You sound like the man for us.” Bruhl then asked Giustino if he would mind, when he was painting these murals, to allow the public to watch and if he would give lectures or discussions on what he was doing—as a public service. Giustino had no objections.

Bruhl also mentioned publicity and media coverage that could have an im-portant effect on his career. During orientation, the reality of public service as defined by the program jolted Giustino out of his dream state. “The things i had been led to believe would happen did not materialize,” Giustino said, “and all that seemed to be happening are the mural workshops and community projects.”

There are other CETA artists who also had the same experience, but other than Demjen, who lost his job, none were willing to speak very openly about it. Demjen now says that the program is run on fear, “the fear of losing $9,800.”

Some of the artists have received community commissions, such as etcher/printmaker Linda Adato who is preparing six limited edition etchings of landmark buildings in Rye. Sculptor Mitchell Sherill is planning a huge cast iron outdoor sculpture for a park next door to the Town Hall in Mt. Pleasant. According to the Council, 44 projects have been initiated in 17 communities during the first five months of the program.

Giustino spoke enthusiastically about individual projects he was involved in, and he emphasized that his criticism was in a constructive vein.

“I’m working hard at protecting my rights as an artist as well as maintaining a working relationship with the Council,” he said. 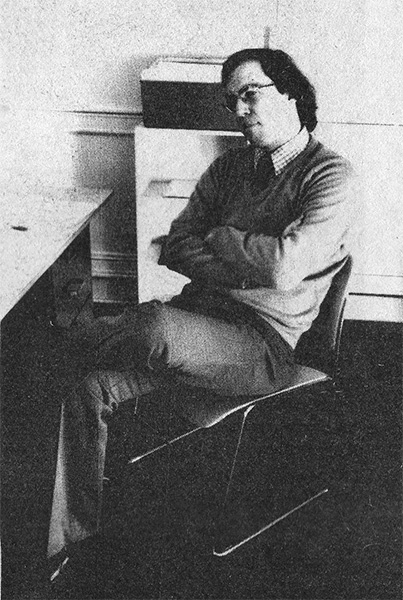 Christopher Bruhl, Program Director for the Council for the Arts in Westchster

Debi Barbaro is classified as a special projects artist, a title she only recently discovered existed and one which she feels has contributed to some of her bizarre assignments. Primarily interested in sculpture and multi—media, Barbaro was assigned to the Greenburgh Nature Center in Scarsdale as “exhibit coordinator.” The Center, she found, was interested in her skills as a carpenter. Her workspace, she found, was an 11×14 basement room devoid of tools. So far she has built a work bench, and constructed animal cages and a stand for the Center’s Christmas tree.

The Center is Barbaro’s eleventh assignment in three months. She has requested a transfer. It was her under-standing that CETA artists had the right to refuse working assignments they felt were untenable. Field coordinators are supposed to scout for suitable sites and trouble-shoot when necessary. The artist, who has put up plaster board for a mural in a Mt. Vernon youth shelter, only to see it poked through with holes from pool cue activity at a nearby billiard table, doesn’t feel her artistic ability has been utilized. Her title for the plaster board project was “assisting in creative redesign of the space.”

Barbaro spoke highly of a project at the Bedford Hills Correctional Facility where she is involved in a set design and theater workshop with another CETA ar-tist, Glenda Dickerson.

At the outset of the program, Barbaro had intented to create pocket parks in Westchester to fulfill the “environmental beautification” goal of the Council. At present, she is considering filing a grievance with the County Executive’s Employment and Training Office.

Asked about personnel problems in the CETA project, Bruhl noted that “with 30 individuals working there are inevitably some problems, especially with people who have never been in this kind of situation before. So, we do have a small number of people—I would say three or four— who are bitterly unhappy with their jobs. It hasn’t turned out to be a fellowship with total artistic freedom. They have to follow an agenda set by somebody else. That’s very difficult. There is not unlimited money. Still, there are several people who are unhappy and we’re trying to deal with that.”

Commenting on Igor Demjen’s termination, Bruhl said that it was unrelated to the arts, it was just a personal problem—of not showing up, of making commitments Demjen had no authority to make as well as disappearing from the site.

Igor Demjen contradicted Bruhl’s assessment of his performance. The ar-tist, who recently began a new CETA theatre project in Middletown, New York with the Synechia Art School ($35,000/three artists and one ad-ministrator) said he was never criticized for his work in the town of Harrison, and only made commitments in his role as mural workshop artist. “No field coordinators ever showed up to make any decisons for me,” he added. Demjen described his hearing as Kafkaesque—”like standing against a blank wall with questions being fired at you. Chris Bruhl is a smooth talker—that’s his job. So, what can I talk about?”

Barbara Goodman, a monitoring supervisor for all CETA workers in the Westchester County Executive’s Employment and Training Office, was at Demjen’s hearing and described it as a “sit-down discussion” where both sides (Demjen and the Council) agreed they no longer had any kind of working relation-ship. “There seemed to be some kind of difference on what the Council wanted and what Demjen wanted. It had to do with artistic freedom and carrying out the Council’s mandate.”

Contrary to U.S. Labor Department guidelines, Demjen claims he never received any written warnings on his job performance or an outline of what steps should be taken to correct these problems.

Bruhl, commenting on the transition from “solo” to CETA artists, said that some of “the artists in the beginning of the program were looking for an advocate who would represent them to the world. Some of them saw the Council as their agent, responsible for promoting their careers….lt’s not hard to feel betrayed when your agent doesn’t sell your work, and especially when your agent isn’t your agent but your employer.” Bruhl noted that he would not be surprised if the same problems developed in the New York City CETA program.

Aside from friction created by site placement, the lack of group meetings (which ended at roughly the same time as Igor Demjen’s termination) and various interpretations of the pre-employment interviews, some CETA artists have a few other bones of conten-tion stuck in their painterly craws. One is copyrights: at present, the Council for the Arts in Westchester holds copyright for a period of one year when the legal rights return to the artist.

Another bone of contention is the employment agreement between the Council and individual CETA artists which, in part, simply states:

“1. Nature and Amount of Services: you will render services on a full-time basis as detailed, from time to time, by the Executive Director in your employee capacity as ,” (a blank for your job title, e.g., visual artist) “of the Council for the Arts in Westchester.- There is a signature line at the bottom of the page—”Accepted this day, of,” etc. This agreement surfaced in early November, which seems to be a watershed date for drawing the line at artists’ rights.

Leonard Giustino hasn’t signed the employment agreement but has contac-ted the Volunteer Lawyers for the Arts. His new attorney, Jane Mallor Smith, Esq., had a lengthy phone conversation with program director Bruhl who she described as very cooperative and hopes these discussions will benefit tier client and all the CETA artists in the program.

Leonard Giustino, viewed by some as an unruly weathervane of CETA artists’ gripes, has jammed his foot in the door of bureaucracy and simultaneously discovered that his own “artistic” toes bruise easily. But, as the Council ap-proaches the half-way mark of its year-long CETA project, the two sides (bureaucratic and artistic) appear to be heading toward a stalemate, despite the early storm warnings and bruised toes.

This entry was posted in Articles and tagged Art Education, CETA, Westchester, WPA. Bookmark the permalink.