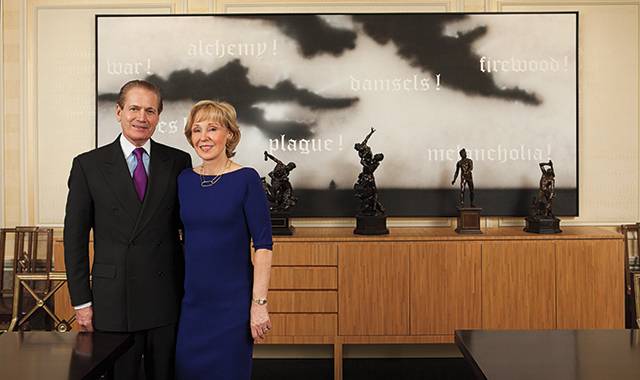 J. Tomilson Hill and his wife, Janine, in their dining room in front of Ed Ruscha’s 17th Century, 1988, and several bronzes cast in the 17th century by Antonio Susini from 16th-century models by the late- Renaissance sculptor Giambologna.

An auction scene in Oliver Stone’s Wall Street, the 1987 Hollywood depiction of the financial industry, features lead character Gordon Gekko chasing a James Rosenquist to $2.1 million. The auctioneer was played by Christie’s now honorary chairman, Christopher Burge, and several other prominent art world figures, including Rosenquist himself and dealer Richard Feigen, had cameos in the film. One of the reported inspirations for Michael Douglas’s magnate was J. Tomilson Hill, a connection the then head of investment banking at Lehman Brothers—who is mentioned frequently in the 1990 book Barbarians at the Gate—categorically denies. Still, the artworks held by the likes of Hill, the current vice chairman of the Blackstone Group, must have made it crystal clear to Stone that serious collecting was de rigueur for a true business titan.

In New York this month, the Frick Collection—a museum established by steel baron Henry Clay Frick—presents “Renaissance and Baroque Bronzes from the Hill Collection,” a trove of nearly 40 works spanning the 15th to 18th centuries. It is evocative of Frick’s own passion for the Italian bronzes he acquired from the estate of J.P. Morgan. The New York City–bred Hill was taken to the museum as a child by his mother, now 96 and a still-active figurative sculptor. “Every private collection has a personality,” says Denise Allen, the Frick’s curator of Renaissance paintings and sculpture, who organized the exhibition. “One leaves Tom’s collection with the impression of dynamism. They’re extraordinary examples of the human figure in motion.”

But his bulk holdings in bronze do not reflect Hill’s broad range of collecting interests, nor his generosity in loaning to museums. When the Frick show opens on January 28, Christopher Wool’s untitled enamel-on-aluminum flower painting from 1993, which Hill owns, will have been on display at the artist’s retrospective at the Guggenheim Museum for three months. The 14th-century Christ and Saint Peter; the Resurrection; Christ and Mary Magdalen, a painting by Giovanni da Milano, also from Hill’s collection, remains on extended display at the Metropolitan Museum of Art, where Hill is a trustee.

Seated beside a Claude Lalanne ginkgo-leaf table in his art-and book-filled study on the Upper East Side, Hill outlined the challenge he set for himself as a collector. “I don’t think many people 30 years ago were trying to put together works from different periods and mediums. It’s a more recent phenomenon,” he says. “Can you put bronzes, post–World War II artists, and Old Masters together in a dialogue?” To accomplish this, Hill and his wife, Janine, have embraced the concept of deep collecting. “We identify an artist and then acquire a minimum of five works, so whether it’s de Kooning or Warhol, by whom we have 25, or Brice Marden, we want depth.” Pausing momentarily, Hill considers his four works by Francis Bacon. “I’m trying to find my fifth,” he says

One of the current four is Study for Portrait II (Pope), 1956, which hangs over the fireplace adjacent to Study for Figure II, 1953, featuring a dark-haired, suited businessman seated on the edge of a hotel room bed. Allegretto Nuzi’s Madonna and Child, circa 1360, hangs nearby, offset by a gold Andy Warhol Jackie, 1964, next to Bacon’s pope. Dialogue, indeed.

Peter Paul Rubens’s Portrait of a Commander, circa 1613, usually hangs in an alcove next to the pope but has been on loan to the Met. Hill acquired the Rubens at Christie’s London in 2010 for £9 million ($13.6 million), when the jury was still out on its authenticity. The issue is now settled, thanks to a barrage of research conducted after Hill took possession of the painting. “Bacon didn’t really like Rubens,” notes Hill. “He liked Rembrandt and actually kind of disparaged the fleshiness of Rubens.” He retrieves a book from the meticulously arranged shelves to find a reproduction of the absent work. “So when you have this screaming businessman and the Pope and this picture, the similarities become evident.” He adds, “They really knew how to paint.”

Hill freely admits that the idea to collect both Renaissance bronzes and postwar painting was not his own. Baroque bronze collector and architect Peter Marino, who designed the Hills’ apartments in both New York and Paris, asked, “I wonder how a 1960s disaster picture would look with a Renaissance bronze?” In the New York apartment foyer, Warhol’s Electric Chair (Red), 1964, hangs adjacent to the 3-foot-tall Figure of a man wearing a satyr’s mask, 1578–80, originally part of a fountain by Adriaen de Vries. Opposite the de Vries across a Carl Andre steel-plate floor piece stands a more recent work, Willem de Kooning’s Clam Digger, 1972, which was recently loaned to the Royal Academy’s 2012 blockbuster exhibition “Bronze.”

From there, the juxtapositions get only more complex: Moving away from the de Kooning one encounters the stunning Astronomy, featuring a female nude with one dainty foot balanced on a globe, from a cast by Giambologna, dating from the early 1570s. Above it hangs an untitled Cy Twombly blackboard painting from 1970. Other works adorning the foyer walls include Warhol’s hand-painted Campbell’s Soup Can (Consomme) [Ferus Type], one of the 32 Campbell’s soup cans in the 1962 Ferus Gallery show in

Los Angeles. Hill acquired it at Christie’s New York in 1996 for a $340,000 hammer price. At about the same time he purchased his first bronze, Hubert Le Sueur’s Venus, cast after 1641, one of the pieces on view in the Frick show.

Unsurprisingly, Hill has an extensive network of dealers and auction-house specialists—from Larry Gagosian and Richard Gray’s Andrew Fabricant to Laura Paulson, chairman of postwar and contemporary art at Christie’s America—on the lookout for pieces that might appeal. “If it’s any good, we get told about it,” he says. Similarly, a number of museum curators help vet authenticity before the collector pulls the trigger on his crisply thought-out and well researched bronze choices. “Tom is quite exceptional to work with,” says Patricia Wengraf, the London sculpture dealer and bronze scholar. “He’s very straightforward. He has a good eye but also tough taste.” Hill confesses he still has a wish list of some 10 Renaissance bronzes that remain at large.

“He’s essentially interested in having the finest, the best available, and that’s a great pleasure to work with,” Wengraf continues. That pursuit for the best sometimes means competing with the very curators with whom he consults. “Tom has the strongest collection of Giambologna models. It rivals that of the Kunsthistorisches Museum in Vienna,” says the dealer. To acquire Giambologna’s signed, 9 1/2-inch high Pacing Horse, cast circa 1573, Hill put vanity aside. The Tomasso brothers, dealers based in London, bought the piece at auction for what the collector believes was less than $50,000. He paid well in excess of $3.5 million for it. “What we like typically is a bronze that gives you a nosebleed,” Hill says.

A bronze of a female nude by Henri Matisse perches on a table in front of a swirling red Brice Marden painting in the living room. But in what may be the most striking ensemble in Hill’s New York apartment, a patinaed lineup of six bronze Giambologna models sit on a sideboard in the dining room. All dating from the 16th century, they are small enough to pick up and admire, as was originally intended. The group is arrayed beneath Ed Ruscha’s large and rather ominous 17th Century, 1988, stenciled with helter-skelter words such as “plague,” “alchemy,” “firewood,” damsels,” and “melancholia.” It seems as if the Ruscha was commissioned to live with the Giambolognas.