Though prices on Ferraris and Alfa Romeos can race into the millions, collectors can find classic cars starting at $20,000. 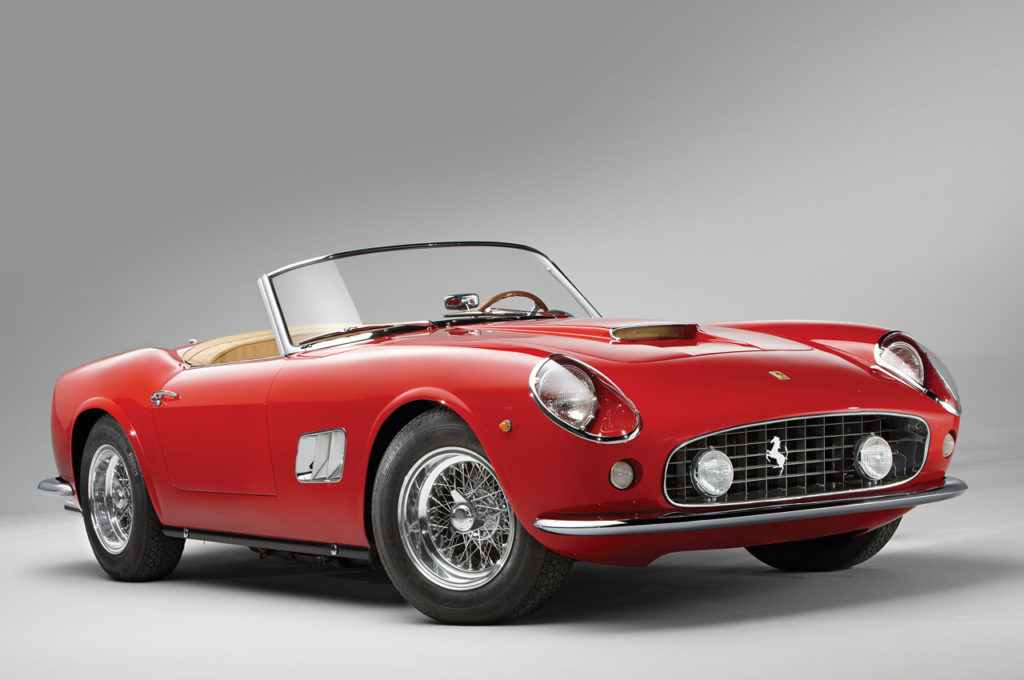 That familiar refrain from racing lore may set some hearts racing. For others it’s the auctioneer’s crisp phrasing of “Sold!” as a vintage racing machine from the 1930s or a classic luxury car from the ’50s finds a new owner.

This August 19 at Quail Lodge, the posh golf resort in Carmel, California, auctioneers Brooks USA will offer a stunning array of high-end motor cars, some race-proven and others never intended to exceed the local speed limit. It caps a motor car enthusiast’s dream weekend on the Monterey Peninsula that also includes a Concorso Italiano–a show-car exhibition and competition for Italian-bred cars.

For Brooks USA specialist Mark Osborne, race cars are in his blood, as his father was an amateur racing driver in Europe in the late 1950s and early 1960s.

“My interest in cars stems from when I was going with my father to the Grand Prix races in Britain and Germany,” he says. The younger Osborne will make his U.S. debut as an amateur racer at the Zupan’s Historic Races at Portland (Oregon) International Raceway on July 7 and 8, driving his 1965 Alfa Romeo Sprint GT.

Osborne’s high-speed hobby dovetails nicely with the current driver-dominated market, one markedly different from the mostly bygone days of collectors buying vintage cars and simply garaging them as a kind of mothballed fleet to gloat over in private. Today’s buyers often rally and even race their cars in specialty events tailored to their vintage machines in the United States and abroad. The events typically take place over several days and include first-rate lodging and dining.

One such event is the Monterey Historic Automobile Races at the Laguna Seca Raceway, taking place the weekend of August 19. Passion for motor sports in general, or a long-harbored obsession for a particular marque, are what drive this super-charged market. A 1966 Ferrari 275 GTB/4 Berlinetta and a 1959 Mercedes-Benz 300d Four-Door Cabriolet, for example, sold in Geneva at Brooks Europe on March 6 for $240,608 and $144,545, respectively–serious money in almost any collecting field. (All prices in European auctions are converted from the local currency to dollars.) Last year the 11-year- old Brooks Group had $54.7 million in overall collectible car sales.

The top car offered at Quail Lodge this season is a meticulously documented 1936 Supercharged 2.9-liter Alfa Romeo 8C-2900A Sports Racing car from the famed Scuderia Ferrari, Enzo Ferrari’s racing team (est. $3.5 million-$4.5 million). The machine won the rugged 1936 San Paulo Grand Prix, driven by Scuderia Ferrari racer Carlo Pintacuda. “The pre-war Alfa Romeos are certainly some of the most sought-after sports racing cars you can buy, and they’re at the top of a collector’s hit list, if you like,” says Osborne.

(At rival Christie’s Pebble Beach California sale in August 1999, a 1937 Alfa Romeo 8C-2900B Cabriolet in gunmetal gray, known as the “Immortal Two-Nine,” fetched a record $4,073,000.) The Alfa Romeo 8C-2900A “is a hugely important car with a wonderful history,” Osborne says. The car includes the prancing horse badge that branded all the Scuderia Ferrari-prepared cars and which later became the vaunted symbol of the Ferrari automobile company, once Enzo Ferrari began manufacturing a marque in his own name in the 1940s.

The provenance (ownership trail) of a car can be even more complex and twisted than that of a high-priced Impressionist painting. “It’s very important that the car should be authentic and that you can trace its history,” says seasoned car collector Myron Schuster of Bedford, New York.

“On a high-priced car, you have to make sure everything is in order, that it has the correct engine and correct serial numbers, the correct transmission axle, and that the body is original. If it’s not original, you should know about it, because that affects the price.” As Schuster says, you want the engine “the car was born with.”

Some of the rudimentary knowledge critical for acquiring cars intelligently and gaining a handle on market pricing can be easily gleaned from reading such industry-proven publications as Hemmings Motor News and the Sports Car Market. SCM, for example, delivers the most analytic and biting reviews of car auctions available anywhere, and both publications are chock-full of cars for sale.

But if your heart and pocketbook are set for competing at the world-class level, another seven-figure contender at Quail Lodge is a 1962 Ferrari 250 GT (for Gran Turismo) Short Wheel Base California Spyder (est. $1.1 million to $1.2 million). The superbly stylish convertible, with a Pininfarina-designed body, is powered by a 3-liter, Colombo V-12 engine capable of hurtling the high-horsepower work of art from zero to 60 mph in seven seconds. “It’s one of the most desirable convertible Ferraris ever made,” notes Osborne, “and they were primarily produced for the American market.”

In a road test review of the California Spyder by the venerable Road & Track magazine in 1960, the authors came up with scant criticism: “In fact, about the only real objection we could find is its price: we can’t afford it.” The same could be said today in the secondary market.

If you’re seeking something a bit less expensive, Brooks USA is also offering an exotic prototype sports car, the 1971 Lamborghini Miura SV (est. $175,000-$200,000). Osborne describes the car as “one of the sexiest-looking sports cars ever made.” The Italian car manufacturer Lamborghini created it to compete with the Ferrari Daytona, a road rocket produced between 1968 and ’73 that could accelerate from zero to 100 mph in less than 19 seconds. Speed and looks are obviously huge factors in this testosterone-fueled market.

Those macho-accented characteristics are certainly evident in the competition-proven 1973 Porsche RSR GT Racing car (est. $170,000-$210,000). “It looks like a 911 on steroids,” says Osborne, referring to the popular Porsche street model. “The cars that are most interesting and the ones the market is chasing at the moment are sports and competition cars,” he adds. While high-end sports cars represent a revved-up slice of the international market and certainly helped drive Brooks’ Quail Lodge auction to its $9.3 million total last year, tamer motor cars are also in demand. Paneled American station wagons from the 1950s, popularly known as “Woodies,” are attracting intense market interest at relatively low prices, as evidenced by the metallic blue 1951 Ford Country Squire “Woody” that fetched $29,900 (est. $25,000-$35,000) at Quail Lodge last year. “Collectors should have at least one in their collection,” suggests Osborne, who says the cars tug on nostalgic strings for the halcyon days of the Beach Boys.

The sports-car extravaganza continues that weekend at the granddaddy of West Coast sports car auctions (now in its 15th year), the Monterey Sports Car Auction at the DoubleTree Hotel at Fisherman’s Wharf. Spread out in two marathon sessions over two days and offering more than 135 cars, the auction’s highlights include a rare single-seater 1931 Bugatti Type 51 GP Racer in French blue, formerly stabled in the esteemed Hayashi Collection in Japan (est. $650,000-$850,000), and a growling V-12-powered 1952 Ferrari 340 America, a competition-oriented machine of which only 25 models were built (est. $400,000-$600,000).

To further a car-lover’s quandary, a third major car auction is taking place that same August weekend. Hot on the heels of last year’s supercharged $17.9 million sale at Pebble Beach, Christie’s is roaring back at the Pebble Beach Equestrian Center with spectacular offerings from the collection of Robert D. Sutherland, a noted car enthusiast and founder of the annual Colorado Grand Rally.

Christie’s is also offering a superbly preserved collection featuring many Brass Classic Era (circa 1900-1915) motor cars from the estate of Matt and Barbara Browning. The collection will be sold without reserve (a minimum secret price set by the sellers). Topping the Browning stable are a 1910 Simplex 50-horsepower Chain Drive Toy Tonneau, rated as one of the fastest cars on the road the year it was built (est. $250,000-$350,000), and an orange 1913 Pope-Hartford Roadster equipped with a six-cylinder engine, reportedly only one of four still in existence (est. $150,000-$250,000). Another Browning gem, a 1915 Pierce-Arrow Model 66 Seven Passenger Touring Car, was the automobile of choice for the rich and powerful, including President Woodrow Wilson. It features cast-aluminum coach work and a monster 825-cubic-inch engine (est. $150,000-$225,000).

Previews run August 17 to 19 from 10 a.m. to 5 p.m. and August 20 from 9 a.m. to noon, with a group owners auction at 6 p.m. and the Browning Estate auction at 8 p.m. Contact: David Gooding at Christie’s International Motor Cars, 310/385-2699. For those unable to make the trip, Christie’s will produce a special live Web cast of its Pebble Beach auction at www.christies.com.

Publicity didn’t help the sports memorabilia sale at Christie’s East on April 5, when a jersey worn by N.Y. Yankees slugger Joe DiMaggio during the 1951 World Series struck out, failing to sell at $100,000 (est. $130,000-$150,000) due to lofty expectations on the part of the seller. “It was ridiculously overpriced,” huffed one attendee shortly after the sale.

Back to the land of bricks and mortar, the March 13-14 sale of Hollywood entertainment memorabilia at Butterfields in Los Angeles included a sexy red-and-black sequined gown that screen siren Marilyn Monroe wore in River of No Return in 1954, the Cinemascope tale of a saloon singer with a gold claim during the California Gold Rush. It fetched $34,500 (est. $30,000-$50,000). From the Wild West days of black-and-white television, a partial ensemble of a brown suede cowboy hat, a vest and two shirts worn by “Gunsmoke” star James Arness galloped to a surprising $16,100 (est.$3,000-$5,000).

The finale of summertime blue-chip sales takes place at Christie’s London, King Street starting on July 5. A noted single-owner sale from the collection of Sir Julius Wernher, a nineteenth-century business tycoon who made his fortune in South Africa before setting up stately quarters in London and stuffing it with masterpieces, will be offered. Top contenders include a striking Portrait of Giacomo Doria by the Venetian master Titian, painted circa 1531 (est. $1.1 million-$1.59 million) and another Italian Renaissance masterpiece, The Rest on the Flight to Egypt by Filippino Lippi, dating from the fifteenth century (est. $636,000-$954,000). Previews are at Christie’s King Street from July 2 to 5, time to be determined, with the auction July 5 at 7 p.m. Contact Christie’s King Street at 44-20-7839-9060.

The impressive Old Master cavalcade switches to Sotheby’s London on July 6 with what’s being hyped as the most important early Italian painting to appear at auction since the 1970s. It’s the thirteenth-century The Madonna and Child Enthroned with Angels by Cimabue (Cenni di Pepo). Estimated to fetch in excess of $3.18 million, the page-sized oil on a gold-ground wood panel hung unrecognized for generations in an English castle in Suffolk. It’s the first time a work by Cimabue, the trailblazing Renaissance painter claimed by some to have discovered Giotto, has appeared at auction. A second major religious subject, executed in oil on copper and dating from the Italian Baroque era, is The Holy Family with the Infant Saint John the Baptist, circa early 1600s, by Orazio Gentileschi, another Italian master (est. $2.38 million-$3.18 million). Previews at Sotheby’s London from July 1 to 5, times to be determined, with the auction July 6 at 10:30 a.m. Contact Sotheby’s London at 44-17-1293-5000.